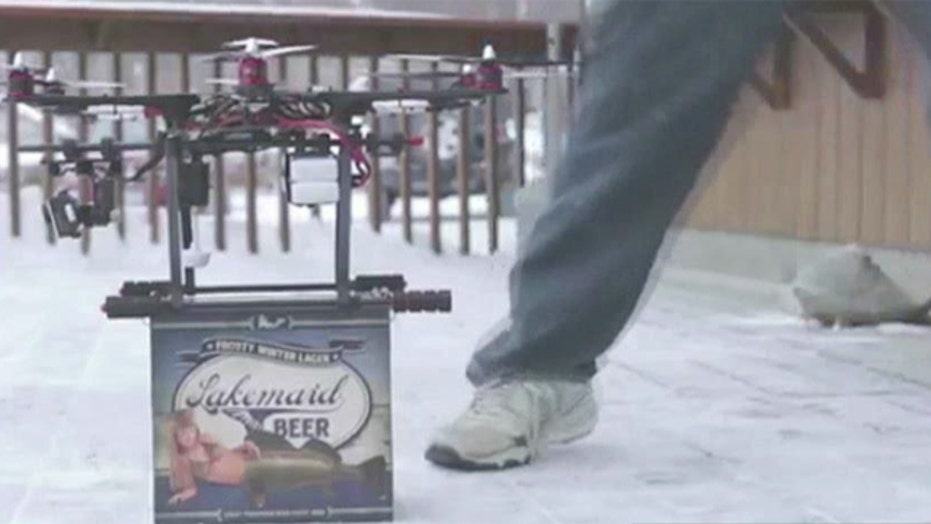 The Federal Aviation Administration has put the brakes on a brewery's plan to deliver cases of beer to ice fishers on lakes in Minnesota and Wisconsin.

Wisconsin-based Lakemaid Beers, inspired by Amazon's announcement that it was planning on using drones to deliver packages, recently adopted its own version of a delivery drone, the Lakemaid Beer Drone, which has been tested on several frozen lakes.

The company recently posted a video on YouTube that shows a shop keeper getting a call for a delivery, writing down co-ordinates and strapping a case of beer to a drone. The drone then delivers the beer to ice-fishermen on a nearby lake.

“It’s the perfect proving ground for drone delivery,” Lakemaid Beer Company’s president, Jack Supple, said in a release. “Our initial tests on several mid-size lakes have been very successful. We’re looking forward to testing the range of our drones on larger lakes.”

The FAA, which currently restricts the commercial use of small drones, contacted Supple twice this week, informing him that he was in violation of agency regulations, the New York Daily News reported.

"I'm on the FAA blacklist for now," he told the newspaper. "They're not too happy with me."

It may be a long wait for thirsty ice-fishers to get their beer. The FAA is not expected to issue new regulations governing the commercial use of drones until 2015. Plus, the brewery is up against another kind of regulatory battle, verifying the legal drinking age of the ice anglers.

Supple told the Star Tribune the Lakemaid Beer Drone is grounded for now.

“I see what they’re talking about. When you think of all of the people who are going to come up with ways to use these, the regulation of it is going to be important, so they’re learning as fast as we are,” he said.