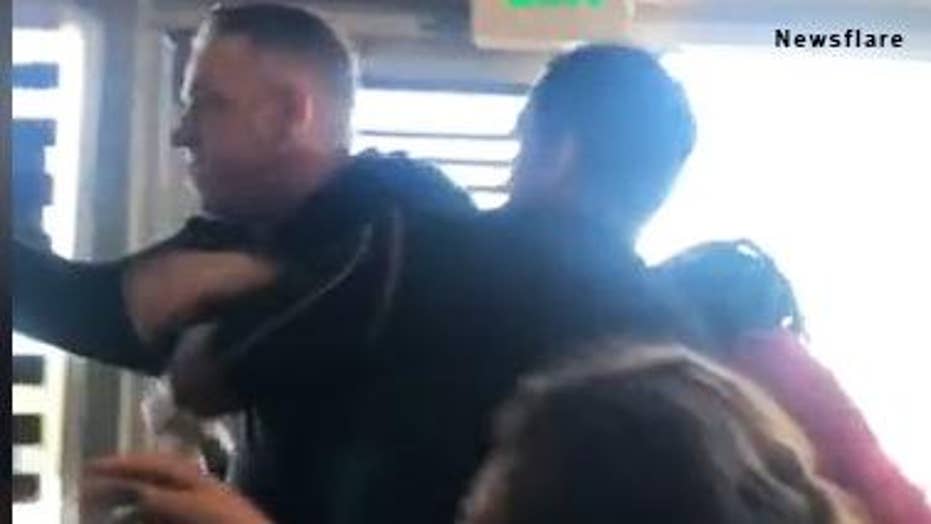 A violent Mother’s Day confrontation prompted by a man’s racist tirade at Aburi Sushi in Long Beach, Calif., was caught on camera Sunday.

A violent confrontation prompted by a man’s racist tirade at a sushi restaurant in Long Beach, Calif., was caught on camera Sunday.

The Mother’s Day incident took place at Aburi Sushi and was captured by diner Ivan Velasco, who posted it on social media.

According to the now-viral footage, the unidentified white man comes into the restaurant and is upset by the waitlist. In the first video of the incident, the man is seen yelling that there is no one standing outside of the door, to which the host responds that those in front of him on the list are waiting in their cars — the restaurant reportedly uses a digital waitlist and sends text messages when the table is ready.

After demanding to be seated, he begins yelling at other patrons at the restaurant, inciting a screaming match.

The man then starts cursing and directing racial slurs toward two black customers. In the video, he can be heard using the term “monkey man” at least twice during his tirade. Velasco told KABC the man used the offensive slur “four or five times” and did “some chimpanzee gestures.”

Staff and customers tried to escort the man out of the restaurant, but he fought back in. A black woman trying to help restrain him punched him as he charged toward other diners.

After the man is taken outside, those in the restaurant are heard applauding.

In a statement to Fox News, police confirm they were called to the scene for a disturbance.

Both the white male and the woman who hit him were cited for battery, police told Fox News.