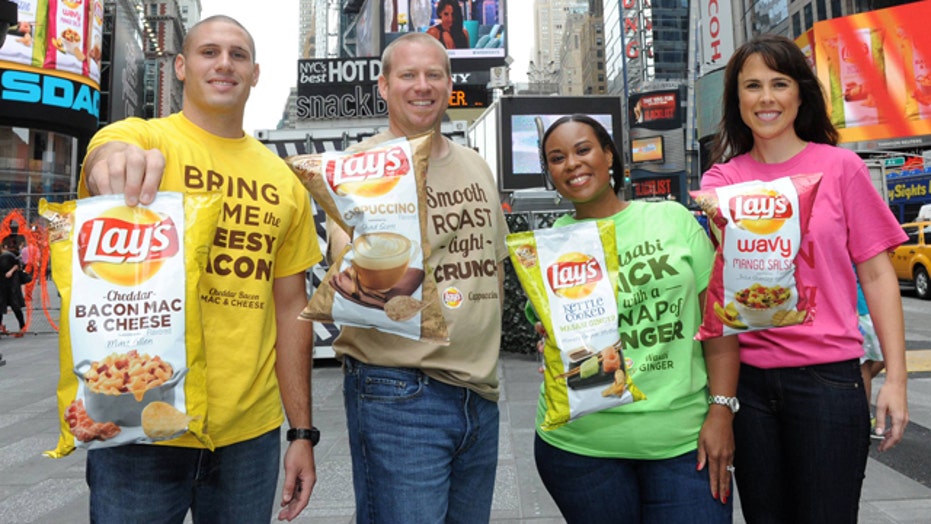 It's no secret that snack time keeps getting wackier.

There are Bacon, Egg, and Cheese Combos, Pumpkin Spice Pringles, Watermelon flavored Oreos --and even 7-Up flavored pound cake.

Lay's is keeping up with the trend with its "Do Us A Flavor Contest" where they asked the public to submit their most creative chip flavor.  Now, after more than 14 million submissions, four finalists have been announced: Wasabi and Ginger Kettle cooked chips, Wavy Mango Salsa, Bacon Mac and Cheese, and their wildest flavor Cappuccino.

The winner will be chosen by fan vote and gets one million dollars or one percent of the sales from their chips through next July. This is the second time Lay's is letting America vote for their newest flavor. Last year's winner Cheesy Garlic bread beat out Chicken and Waffles and Sriracha.

The new chips aren't available on grocery shelves until later this month, but we got our hands on all four flavors and put them to the test.

How'd they stack up?

Wavy Mango Salsa was likened to "Hawaiian Punch" while Wasabi Ginger lacked the wasabi kick. Bacon Cheddar Mac and Cheese was surprisingly the crowd favorite. And how could we forget the wildest flavor Cappuccino? It was surprisingly delicious. One taste-tester compared it to a cinnamon churro. And while there's no caffeine in it, it definitely adds a bit of a flavor jolt for an afternoon pick me up.

You can vote for your flavor here.

We know we missed the deadline to submit our dream flavor, but hey Lay's ,we'd love for you to consider a beer flavored chip. No six pack required!