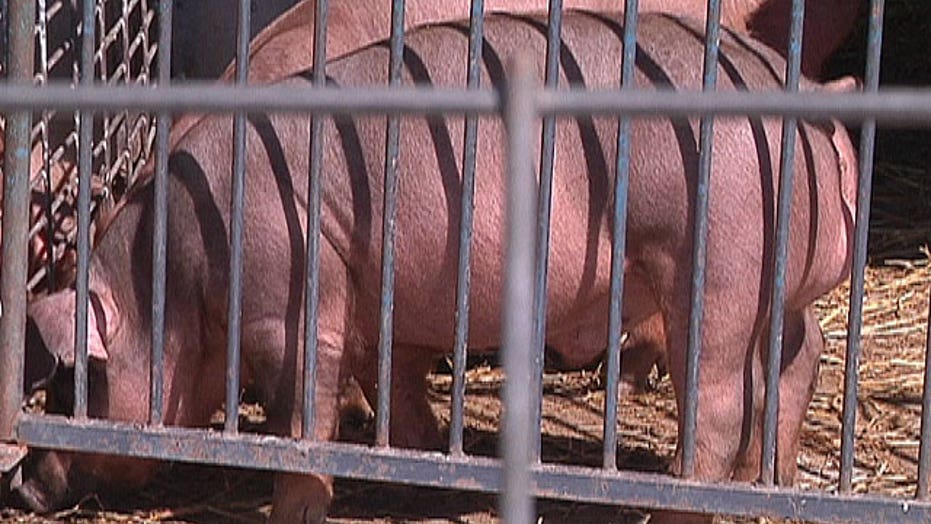 Woodward, IA – Pork and whiskey are two things that usually pair nicely, but combining the two in a single cut of meat can be a hog-heavenly match.

Scott Bush and Keith Kerkhoff, co-founders of Templeton Rye Whiskey in Iowa, famous for their rye whiskey made with the same recipe their grandpas used to make as bootleggers, came up with the concept of infusing pigs with the taste of whiskey late last year.

"Here's a crazy idea, let's get a bunch of pigs and feed them our spent mash and see what happens," said Bush.

What happens is pork that should have the same sweet, rich flavors of the whiskey.   The experiment so far involves 25 Duroc heritage pigs that were born in January and won't be ready for processing until June or July.

About a fifth of the pigs diet is made up of the spent Templeton mash.  The rest is high-quality traditional pig feed.

"I hope it catches on and people enjoy it and support it," said Kerkhoff.

This is the first year Templeton Rye Whiskey is trying the experiment and they've gotten a lot of positive feedback from whiskey fans and chefs.

"Top chefs all across the country have been interested in what we're doing," said Bush.

Since there are only 25 pigs, restaurants owners are vying for the chance to get one, including famous chefs like Stephanie Izard, owner of The Girl and The Goat in Chicago and winner of "Top Chef" in 2008.

Iowa restaurants are also trying to get on the short list. Scott Stroud is the corporate chef for Orchestrate Hospitality in Des Moines, Iowa.

"They take their two vices, whiskey and pigs, and the end result is unknown, we're going to be the first to test it out," said Stroud.

Three of the Orchestrate Hospitality restaurants are planning to split one of the pigs. Stroud said they will likely turn majority of the pig into prosciutto to use on pizzas or meat plates in order to make the meat last longer.

"We don't know what to expect to be honest. That's the mystery, the excitement with this Templeton project. We assume sweeter, more flavor, maybe the whiskey flavor," said Stroud.

Although the pigs are fed a whiskey mash diet, Kerkhoff and Bush said there is no alcohol fed to the pigs. "No you won't have to be 21 to eat this pork," joked Kerkhoff.

The pigs will cost around $700 and will be sold when they reach about 210lbs this summer.