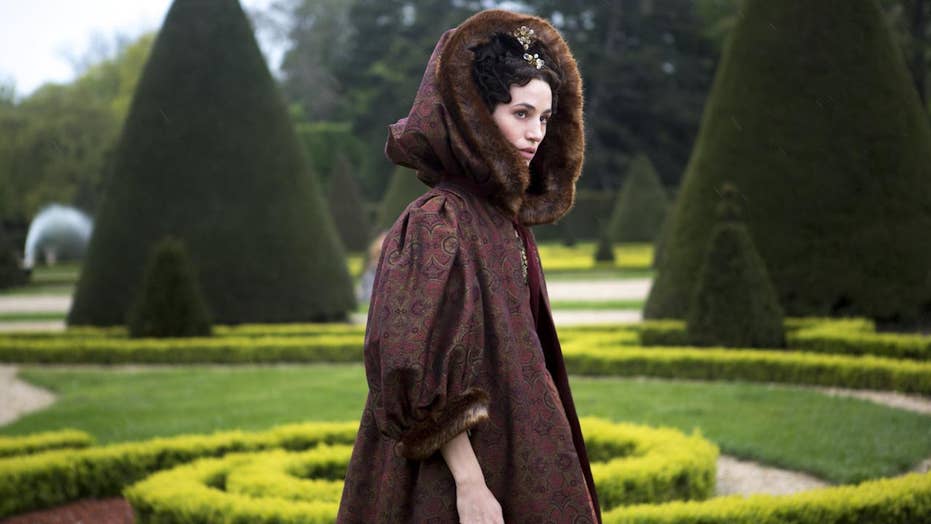 France’s most expensive series on television stirred headlines in 2016 when audiences overseas witnessed jaw-dropping sex scenes and bloodshed all within the first episode. Now, one of its stars insisted American viewers will easily tune in for Season 2.

“It’s very much a show of its time,” Elisa Lasowski, who plays Queen Marie-Thérèse in “Versailles,” told Fox News. “Like, there’s a trend in television for shows to be more and more sexy and more and more violent. It’s sort of something that has existed… I don’t think it comes out of nowhere. It doesn’t particularly shock me."

Express reported at the time the English-language period drama reportedly features a sex or violent scene every 15 minutes and double the amount of nudity found on HBO’s “Game of Thrones.” The French star claimed the real-life history that inspired the series would have surprised viewers even more.

“I think actually, if you sort of look at the history, it would have probably been a lot worse, let’s say,” said Lasowski. “Or a lot more heightened. Not so much better or worse. But a lot more heightened actually than the way we depicted it…. So I don’t feel like it’s an element that’s been added on.”

“Versalles” tells the story of France’s most famous king, Louis XIV (George Blagden), who decides to build the greatest palace in the world while facing political obstacles. It would become an opulent, breathtaking spectacle where wealth and pleasure was found in every single inch of the castle, prompting a drained budget and political rivalry. Lasowski revealed it was easy for the show to rely on history for titillating stories to share in front of cameras.

“He wanted to bring out all the nobles away from Paris and [bring them] all in the same palace,” she explained. “And it was a way to control them. He could control his opposition. He created this sort of world of gambling, eating, and drinking… It was very much a pleasure palace he created to lure people in and essentially, well they weren’t allowed to leave, but it was a way to control the opposition."

She added, "It’s beautiful, but it’s definitely not a modest place… There’s just gold everywhere and the Hall of Mirrors in fact. I think every sheet of mirror was the equivalent of, in money at the time, the equivalent of 16 battle ships or something crazy like that. It was just a pure display of money and power.”

“Versailles” reportedly costs over $3 million an episode, doubling that of “Downton Abbey” — and it’s easy to see why. The series is not only filmed in Chateau de Versailles on Mondays when it’s closed to the public, but it also takes place in several different castles around Paris.

“The show invested a lot of money to create, to recreate the kind of world in the way they had,” said Lasowski. “All the costumes are made to measure… Every wig we wear is something like 5-4 thousand euros, which is what, maybe $6,000 dollars, something like that? They sew one hair at a time.”

However, transforming into a royal isn’t always so glamorous.

“It takes about two hours, I would say, every morning, which, considering the amount of work, it’s actually pretty fast," said Lasowski. "I think it’s just because the hair and makeup team… all the dressers are actually extremely good at what they do. But it is quite a bit of effort.

"And getting into costume is all right because you have the sort of time to get into your character. Sort of ease into it. But the challenge is to keep the clothes and the wigs [on] for 14 hours or however long our days are. That’s quite a challenge I would say. And then you have to take it off as well.”

Still, Lasowski has always been eager to take on the mysterious queen, one who was sidelined in textbooks.

“Throughout history, she was described differently by different historians,” she said. “And that’s because initially historians, which would have been the equivalent of journalists today, where a lot more into recording the stories of [the king’s] mistresses because it was a lot more fun, like tabloid… The queen was less fun to talk about.”

It also didn’t help Louis XIV allegedly never denied himself the satisfaction of having countless affairs.

“Louis XIV respected the queen as like a political ally… and actually three times in history, he sort of made her regent where he had to be away… And that’s actually something we see in Season 2, which is interesting,” said Lasowski. “But yeah, as a woman, he didn’t really respect her as his wife… [he had] this sort of double life and, not a double life actually because it was very out in the open.”

Lasowski also felt right at home within the set. Back in 2013, she had a guest role on “Game of Thrones” as Mirelle, a prostitute in one of Petyr Baelish’s (Aidan Gillen) brothels. George R.R. Martin, the mastermind behind the fantasy drama, reportedly based much of his stories on medieval European history.

“When the show was initially created, I saw some of the very early scripts,” insisted Lasowski. “I auditioned for the show at least like seven, eight, nine times. The casting directors kept asking me back just to find something for me to do in it. And eventually the small part came along and I was like, ‘Yeah, let’s do it.’ It was really cool.”

But these days, Lasowski is perfectly content in being part of the Sun King’s court and hopes curious American viewers will join them.

“It’s amazing, filming in the castles actually,” said Lasowski. “It adds a lot to the acting and how we behave.”

Season 2 of “Versailles” will be making its U.S. television premiere Saturday at 10 p.m. on Ovation TV.