Former President George W. Bush, left, presents a medal of Distinguished Leadership to U2 musician Bono during a gala for the Forum on Leadership at the George W. Bush Institute, Thursday, April 19, 2018, in Dallas. (Associated Press)

The former president was on hand to present the award to the Irish musician at a gala at the George W. Bush Presidential Center outside Dallas, the Dallas Morning News reported.

The event was scheduled before Barbara Bush's death Tuesday at age 92.

The award recognizes Bono’s humanitarian efforts in fighting poverty and HIV/AIDS, particularly in African countries where it has devastated the population, the newspaper reported. 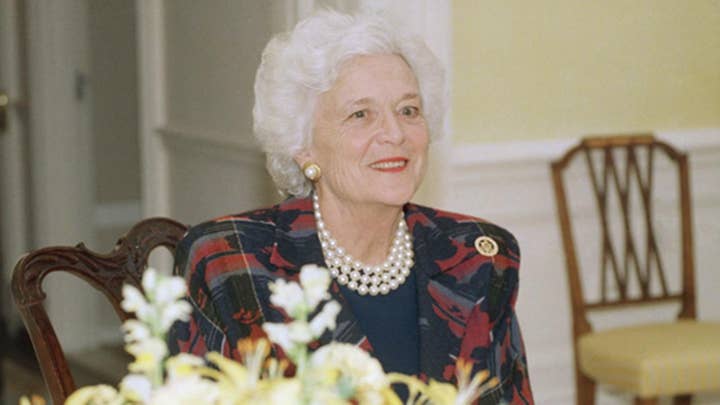 Bono paid homage to the former first lady and applauded her role in helping to de-stigmatize AIDS, the report said. He said she once held a baby with HIV and embraced an adult man with AIDS.

“You were born of an AIDS activist, sir, and you became one,” Bono told the 43rd president of the U.S.

Former President George W. Bush, left, and U2 musician Bono participate in a Q&amp;A session during a gala for the Forum on Leadership at the George W. Bush Institute, Thursday, April 19, 2018, in Dallas. (Associated Press)

Former Secretary of State Condoleezza Rice also attended the gala and recounted how she helped introduce the two men as “the tough-talking former governor of Texas, and an Irish rocker.”

“The odd couple,” as Rice called them, has since developed a long-term friendship lasting more than a decade.

The presidential center intends for the award to be an annual medal for individuals who change the world in some way.