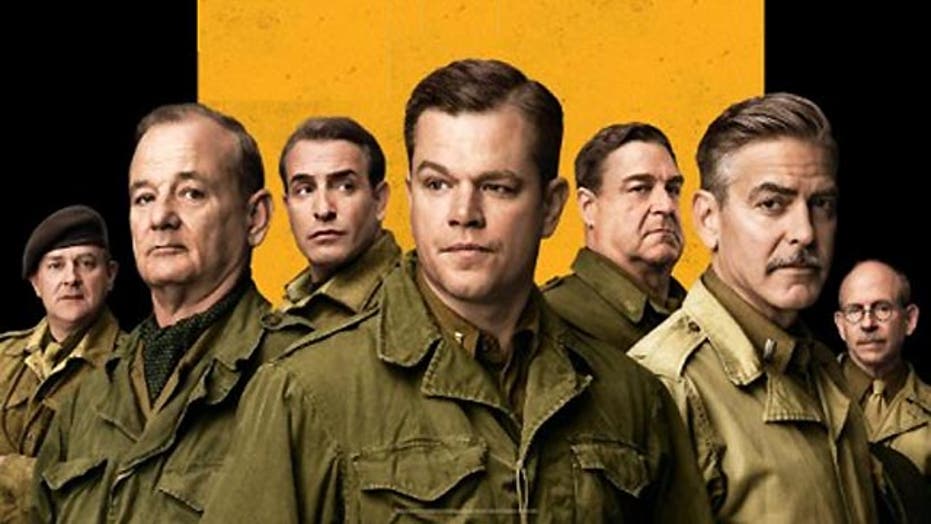 Is 'The Monuments Men' a misfire?

NEW YORK – George Clooney and friends’ “The Monuments Men” isn’t quite sure which foot to stand on in a post-“Saving Private Ryan” world.

Based on the book “The Monuments Men: Allied Heroes, Nazi Thieves and the Greatest Treasure Hunt in History” by Robert M. Edsel and Bret Witter, “The Monuments Men” follows a platoon of art historians and curators commissioned by President Roosevelt to track down countless pieces of art stolen by the Nazis at the tail-end of World War II.

Part investigative art mystery, part traditional war film, part off-beat comedy, Clooney’s adaptation seems to be in constant flux and littered with landmines as the story feints into near-slapstick then pivots to the horrors of war. These jagged transitions from laugher to drama never comfortably settle. The lighter tone makes more sense since Clooney initially sets the characters up as odd-men-out from the trained G.I. Joes, but Clooney also feels responsible to show the brutality that comes with battle, thus creating an unnatural and harsh juxtaposition. Clooney would have been better off with sticking with just light drama or comedy rather than attempting this juggling act.

Clooney has proven to be a fine director over the years, primarily sticking to smaller character-driven dramas. “The Monuments Men” is certainly his largest directorial effort to date but the scope and weight of the project seems to be just a little more than he’s able to handle. Adapting the book with frequent collaborator Grant Heslov, Clooney has certainly created a throwback to old Hollywood war films, which is fine, but almost unsure of his own recipe, throws far too many ingredients into the mix ultimately creating a war film that is indeed enjoyable but suffers an identity crisis.

This is Clooney’s tribute to the original Monuments Men, but the contrasting tones make this as much a tribute as “Stalag 17” or “The Great Escape” was to POWs. Despite the odd tonal shifts, this is a refreshingly unique story within the war film genre; a fascinating piece of history about a group of older civilians who volunteered to brave the front lines to save pieces of history. A message that Clooney reiterates throughout: we fought the Nazis to preserve our culture.

When “The Monuments Men” does stand at attention and the serious drama kicks in, there’s no impetus for the audience to connect emotionally to any of the characters. For a film based on a real platoon and book five-hundred pages thick, there is little to no character development. And worse – the characters are essentially nameless. It’s very difficult to connect with any character when you have no idea who they are.

Despite the failure of any characterization, “The Monuments Men” features a dream cast. Joining Clooney are Matt Damon, Cate Blanchett and John Goodman. Bill Murray and Bob Balaban steal the show as a bumbling comic duo, starting as bickering rivals then developing a heartwarming friendship. (Every film needs Bob Balaban and Bill Murray.) “Downton Abbey’s” Hugh Bonneville and Oscar-winner Jean Dujardin (“The Artist”) round out the superb cast.

Cate Blanchett as Claire, though, runs circles around her co-stars. She is the only actor to fully envelop a character from the inside out. Sporting a strong French accent and heavy rigidity, she shines as a resistance fighter embedded in the center of the Nazi’s operation, keeping copious journals on everything the Nazis have pilfered. When Matt Damon requests her help, she is reluctant to assist, fearing that he, like the Russians, will steal the art back for himself. Thus a tense but tender bond brews, once again showcasing Blanchett’s excellence.

The highlight of the film – and adding to the film’s throwback style -- is Alexandre Desplat’s prominent and wonderful score. Desplat, who also has a small on-screen role as a resistance fighter who helps Damon sneak into Paris, channels Elmer Bernstein’s infectious march from “The Great Escape” as well as the best of John Williams’ 1980s soaring adventure films.

Overall this is an enjoyable film, but it feels like a work-in-progress. Clooney’s message: remember these unsung heroes who fought to preserve our culture, but if you want a more in depth telling of this fascinating piece of history, you better stick with the book.