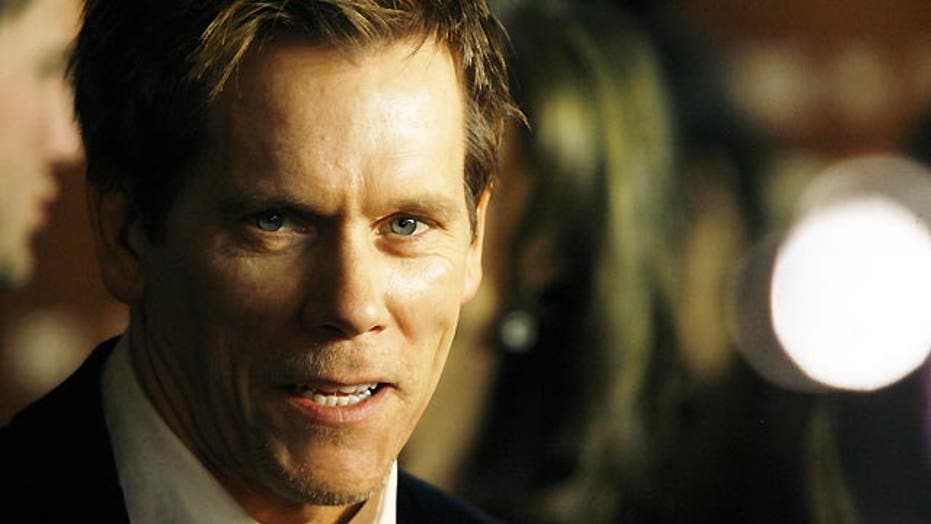 What Kevin Bacon likes about 'The Following'

Kevin Bacon’s new show “The Following” has been filled with nothing but heart-stopping suspense and last night’s episode, “The Siege,” was no exception.

We see Joey finally become aware that something just doesn’t add up with the farmhouse scenario. Took him long enough!

He is able to sneak downstairs one morning and call his mother using a cell phone he saw Emma hide on a shelf.

Joey hears how desperate and upset Claire sounds -- even though Emma has been telling him the whole time that Claire purposely sent him away.  He is able to talk on the phone long enough for the FBI camped out at Claire’s home to get a cell phone signal before he is discovered and dragged away by Paul.

The cops discover that the cell phone signal is scrambled with an algorithm and are able to estimate just a general location in Duchess County for the farmhouse.

Meanwhile, Joe Carroll, who we haven’t seen much of (but are still absolutely terrified of) bullies his former appeals lawyer, Olivia, to deliver a cryptic message during a press conference.  It is picked up by national media and-- just as Joe wanted-- alerts even MORE of his creepy followers to activate their part of his bigger plan.

One of them, Hank, speeds over to the farmhouse to apparently transport the trio and Joey to another location, realizing that the FBI is increasingly hot on their trail.

After the press conference, Olivia goes to Claire’s house and asks to speak with her privately.
“The only way you will see your son is if you follow these instructions,” she tells Claire, giving her a street address to travel alone to.

The FBI is obviously not having that, even when Claire lies and insists she needs to just get out of the house and meet a friend for lunch.

While at the restaurant, Claire pretends to go use the restroom, but sneaks out an emergency exit.   Clearly blinded by the desire to be reunited with Joey, she gets in a sketchy car (why would she get in the car?!) with another one of Joe’s henchmen.  They speed away from the restaurant and we know it’s not going to end well.

Joey, banished to his room after making the phone call, overhears Emma, Paul and Jacob discussing how they’re lying to him.  He is able to make an escape (yay, Joey!) and sprints through the woods until he encounters elderly neighbors.

Emma eventually catches up to Joey, feeds the couple a bunch of lies and whisks him away.  She orders Paul to “go thank them” for helping out.

Just as the couple begins to make a call to the police, realizing Joey is “the boy from the news,” Paul sneaks into their house and viciously beats them to death.   They’re later found by our hero Ryan and a local cop propped up sitting in living room chairs.

Although the neighbors had an unfortunate end, the 911 call fragment enables the FBI to narrow down their search for Joey to whatever property abuts the neighbors’ home.

Ryan and the cop split up to begin checking out the farmhouse.  Hank finds the cop in the barn and shoots him. Ryan arrives and kills Hank, but it is too late.  The cop is dead.

Ryan makes his way to the farmhouse itself and spots Joey peeking out from upstairs.  He is just about to coax Joey downstairs to take him to safety, as we all of a sudden see a gun pointed to Ryan’s head from behind.  It’s Paul… Of course, it couldn’t be that easy.

The episode fades to black after that and we’re left with many questions for next week.  Where is Claire being driven to? Obviously not to be reunited with Joey and live happily ever after.  What evil bidding is Joe going to force Olivia to do from inside the prison walls next? Is Jacob finally going to muster up enough courage to kill Meghan, the hostage in the basement? Oh, and what is going to happen to Ryan?

“The Following” airs Monday nights at 9 p.m. ET on FOX.