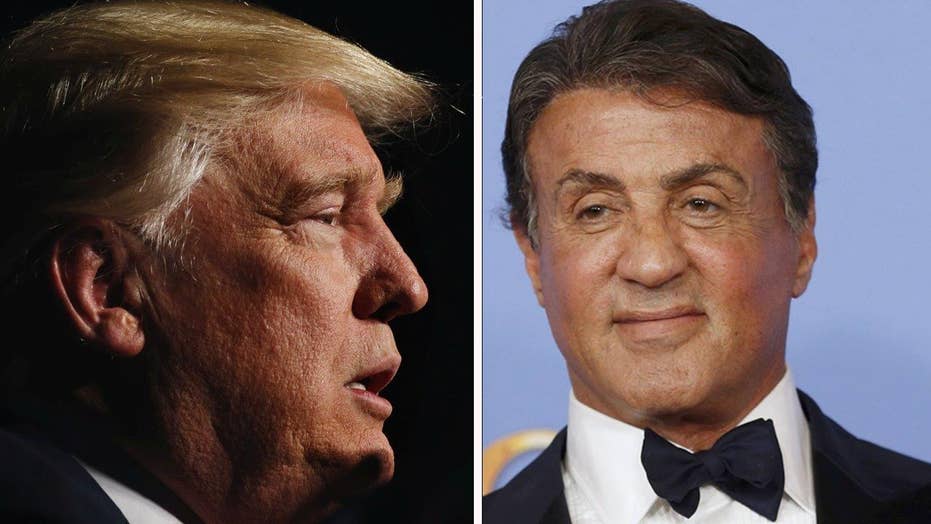 Fox411 Breaktime: 'Rocky' and 'Rambo' star Sylvester Stallone has been mentioned to head up National Endowment for the Arts

Stallone, 70, once said about his daughters, "I wish my daughters would box. I’m so worried about the guys coming up to them. I would love them to be able to smack a guy right off a bar stool."

But now it's time for Stallone to step aside and let her daughters shine. But guys beware -- Rambo will be watching!

A communications major at the University of Southern California, Sophia (right) has rarely spoken to the press since undergoing heart surgery in 2012 – the same year her half-brother, Sage, tragically died from heart complications.

When talking about hosting the Globes she told Hello, “Since I’m the oldest, I try to stay a bit more sophisticated and keep it simple... Out of everyone I think Sistine can rock the complex, cool, rocker look."

Jimmy Fallon, host of the 74th Annual Golden Globe Awards, poses with Miss Golden Globes 2017, from left, sisters Sistine, Scarlet and Sophia Stallone after rolling out the red carpet during Golden Globe Awards Preview Day at the Beverly Hilton on Wednesday, Jan. 4, 2017, in Beverly Hills, Calif. The awards will be held on Sunday. (Photo by Chris Pizzello/Invision/AP) (Associated Pres)

Stallone’s middle child is already following in the footsteps of her former-model mother. After signing with IMG models, Vogue called the aspiring model a “fresh face to watch.”

She has admitted that father’s fame has helped her amass a solid 127,000 Instagram followers, but also made it clear she hopes to forge her own path.

“I have followers because of my dad. I get asked about his movies once a week. They want to know how he stays in shape and if he writes the screenplays,” she wrote in an Instagram post.

About her hosting stint she told Hello, “I think we’re all going to have the same color scheme so we match in that department but each have a different style that complements our body shape and incorporates each of our individual personalities in each look."

At just 13, Scarlet hasn’t been nearly as visible as her older sisters, but via her proud dad’s Instagram, we know she inherited some of his athletic ability. She's called “the Flash” by her father for her running speed on the track.