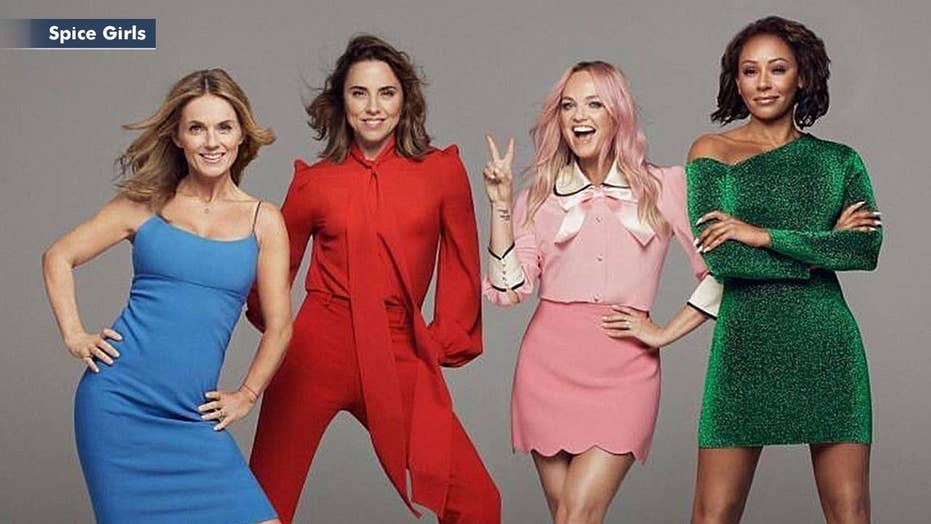 Spice Girls are back; Shakira does good in Colombia

Hollywood Nation: Spice Girls announce reunion tour in cities across the U.K. in 2019 without Victoria Beckham who will opt out to focus on her fashion line; Shakira lays first bricks for new schools in Cartagena and her hometown of Barranquilla in Colombia.

Emma Bunton reveals she accidentally sent a sext to her mom — alongside a photo of her boobs.

The Spice Girl, 43, said the photo and racy text message were meant for her long-term partner Jade Jones, 40, who she was missing while on tour with the band over the summer.

But luckily her mother just made fun of her as the pair are such firm friends.

SEE THE SPICE GIRLS THEN AND NOW

The singer explained on the pilot for the new Paul O'Grady show, according to The Mirror: "I was away from my other half for a few days. But we are very much in love and I love sleeping next to him.

"We are together all the time. So I decided that I would send a mucky text. A cheeky text. A sext.

"I did a little selfie with the boobies. I did have a bra on. But I did a sleazy kind of little selfie and a 'Miss you' and 'Wish you...'  and sent it to my mother."

THE FIVE BEST PIECES OF SPICE GIRL MEMORABILIA EVER

Jade Jones and Emma Bunton attend The BRIT Awards 2019 held at The O2 Arena on Feb. 20, 2019 in London. The singer, known as "Baby Spice," accidentally sent a sext meant for Jones to her own mother. (Getty)

She added: "Luckily I speak to my mum 10 times a day and we are the best of friends. She has got a great sense of humor but I was mortified."

She started dating him in 1998, but split several times before committing in 2004.

CALLING ALL SPICE GIRLS FANS: THE 'SPICE WORLD' BUS IS AVAILABLE FOR RENT ON AIRBNB

They announced their engagement in 2011 and have two sons together, Beau, 12, and Tate, 8.

The singer opened up about how working on a song together "renewed their romance."

Speaking on Lorraine, she said: "[Working with] my other half Jade, it was so romantic. Being in the studio and doing this video, we had a great time. We just spent the day kind of canoodling.