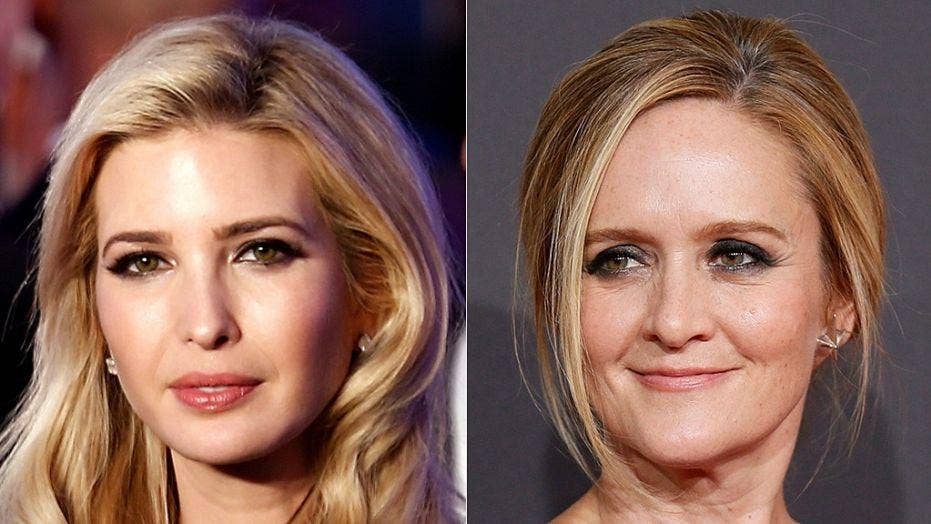 On the heels of ABC firing Roseanne Barr over a racist tweet, a harsh focus is now on “Full Frontal” host Samantha Bee for calling first daughter Ivanka Trump a “feckless c---t" on Wednesday night.

President Trump has been pointing out a double standard regarding who can use insensitive rhetoric, and many have pointed to Bee’s comment as a prime example of the hypocrisy. Mediaite columnist Joseph Wulfsohn noted that Barr was fired in three hours after likening former President Obama adviser Valerie Jarrett to an ape, but TBS has remained silent on Bee.

“If that's not a double standard, I don't know what is,” Wulfsohn tweeted.

It all started when Ivanka Trump was criticized this week by the left for a snap she shared of her hugging her son amid reports the Office of Refugee Resettlement lost track of 1,500 immigrant children in the last three months of 2017. Many Trump critics buttressed their claim with photos of illegal immigrant children in what looked like in cages, only to be embarrassed when it turned out the pictures were taken during the Obama administration.

Bee weighed in on Wednesday night on her TV show with a crude attack on the first daughter.

“You know, Ivanka, that’s a beautiful photo of you and your child, but let me just say, one mother to another, do something about your dad’s immigration practices, you feckless c---!”

“The collective silence by the left and its media allies is appalling. Her disgusting comments and show are not fit for broadcast, and executives at Time Warner and TBS must demonstrate that such explicit profanity about female members of this administration will not be condoned on its network,” Sanders told Fox News.

Bee defenders were quick to label these takes as “whataboutism,” although few on the right were defending Barr's comments. Most were simply pointing out that a double standard clearly exists regarding how celebrities who say awful things are treated.

The Daily Wire’s Matt Walsh wrote that Bee's comment was “not an off-the-cuff tweetstorm, we should note. This was a written, planned, and produced monologue on Bee's TBS show… She should be fired immediately. And we should demand that she be fired.

CNN even condemned Bee’s comment, with anchor Poppy Harlow calling the comment “incredibly offensive” and saying the c-word is “never okay to say to someone” on Thursday morning.

“I think that the larger point here that is missing is the culture that is being generated from the president,” Boykin said.

Despite Boykin's spin, dozens of media members and celebrities took to Twitter to chime in on Bee’s comment.

TheWrap media editor Jon Levine asked, “Can we talk about what would have happened if Roseanne had called Malia Obama a c---?

Conservative commentator Mark Levin called Bee “disgusting” and said she should be fired immediately and NBC's Megyn Kelly asked, "How is this acceptable?"

“And how are we expected to take any of these publications seriously if they gleefully repost something like this at the same time they (rightfully) condemn @therealroseanne? You know the saying Love is Love? Well, Hate is Hate,” Kelly added.

Political commentator Ryan Fournier wrote, “Bee called Ivanka Trump a “feckless c*nt” and some are defending this? You’re the problem with Hollywood. What happened to civility? She needs to be fired.” Free Beacon reporter Natalie Johnson joked that "Samantha Bee calling Ivanka Trump a c*** in reference to a picture she posted with her son is so woke, I can't believe people decry media bias!!"

Comedian Tim Young wrote, “So Samantha Bee shattered the glass ceiling of letting people call women the awful c word... we can all do that now, right?”

Young added, "Could you imagine the INSANITY if Chelsea, Sasha or Malia were called what Samantha Bee called Ivanka?"

Radio host Erick Erickson chimed in, “All the progressives in my timeline telling me the Roseanne situation and Samantha Bee situation are not comparable will, I’m sure, be fine when Trump supporters start calling Clinton, Warren, Pelosi, etc. the same as what Samantha Bee called Ivanka Trump.”

Speaking to reporters, Sanders said Trump was “simply pointing out the bias” and “hypocrisy in the media.” She said “the most horrible things” are said about this president and “nobody addresses it.”

Fox News media guru Howard Kurtz seemed to agree with Sanders and said on "America's Newsroom” Thursday that Bee's comment is a "shining example of viciousness" but there has been "no uproar" against TBS to this point.

"It's the worst word in the English language that you can use to describe a woman. ... Instead it's being reported as, 'Wow, did you see what Samantha Bee said?' The media's outrage against Roseanne, which is justified, is kind of very selective and I'm not seeing it against Samantha Bee," he said.