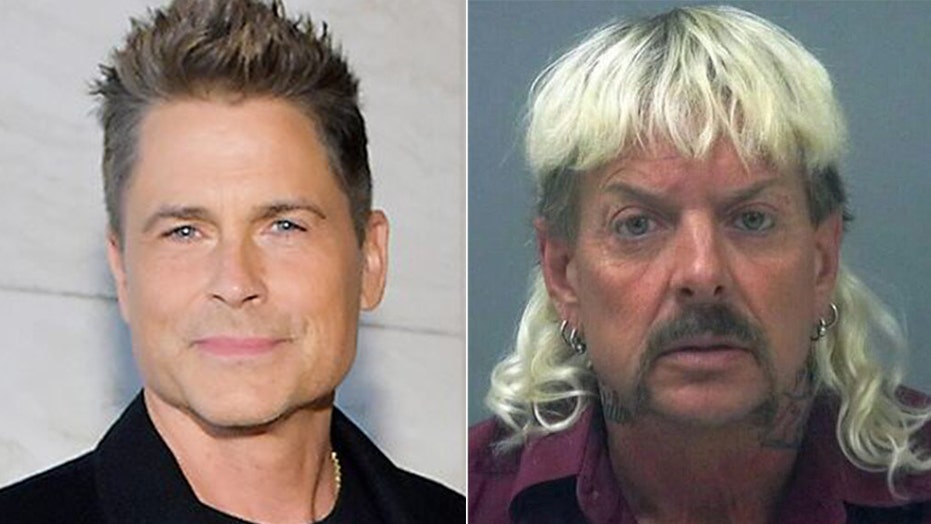 Rob Lowe is getting in on the “Tiger King” phenomenon after numerous Hollywood standouts have expressed interest in portraying the big cat wrangler -- and the actor just might have the best shot at making it happen.

On Monday, Lowe said that he and “American Horror Story” creator Ryan Murphy would be “developing our own version of this insane story,” and according to People magazine, the project is currently in discussion.

The "911: Lone Star" actor, 56, channeled his inner Joseph Maldonado-Passage, 57, otherwise known as “Joe Exotic,” on Monday when he shared a series of snaps to his Instagram, dressed to the nines in the similar style worn by Maldonado-Passage on the popular Netflix docuseries.

“Rob Exotic. UPDATE: Ryan Murphy and I will be developing our version of this insane story. Stay tuned!” Lowe captioned the snaps in which he sports a blonde wig, an olive-colored blouse with cheetah and flower prints, and Maldonado-Passage’s knee-brace.

For his effort, Lowe was offered huge praise by a number of A-list admirers of his authenticity.

“Oh YES!!” responded Chris Pratt while his wife, Katherine Schwarzenegger, had the complete opposite reaction, commenting: “Oh no.”

Patrick Schwarzenegger also chimed in, adding: “Actually all for this.”

The seven-part docuseries for the streaming giant follows Exotic in his exploits as a zookeeper, country musician, aspiring politician and arch-rival of fellow big cat enthusiast Carole Baskin. Maldonado-Passage was handed a 22-year prison sentence for his involvement in a murder-for-hire plot.

In a recent interview from behind bars, the star said he dislikes the idea of being locked up and unable to enjoy his newfound fame, however, he exhibited contrition for some of his behavior toward his animals.

"You know it would be nice if I could actually see me being famous out there, but I've seen these same four walls for a year and a half now," he told Netflix from prison in a video shared to Twitter on Friday.

"Go sit in a cage with your animals for a week,” he continued. “I mean, when I left the zoo and I sent my chimpanzees to the sanctuary in Florida and imagined what my chimpanzees went through for 18 years, I -- I'm ashamed of myself.”

“Viewers are understandably riveted by Netflix’s ‘Tiger King,’ but the millions of true crime fans around the world were left wanting more,” Henry Schleiff, group president of Investigation Discovery (ID), Travel Channel, American Heroes Channel and Destination America, said in a press release. “ID is the perfect place to find the inevitable sequel to this drama – featuring a missing husband, a hit man, and the illegal business of exotic animals.  It's time to let the cat out of the bag and address the lingering questions that viewers demand be answered.”

Although Baskin, CEO of Big Cat Rescue, has denied any involvement in Lewis’ vanishing, “Tiger King” lays out the case that she allegedly had a lot to gain from him going missing, and features Joe Exotic championing the theory as often as possible, which he’ll do again with Investigation Discovery.