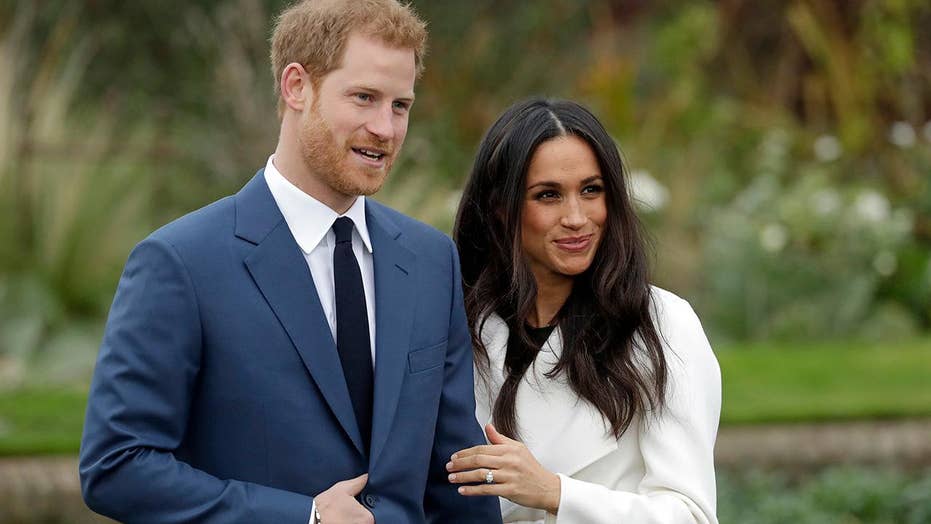 Prince Harry and Meghan Markle made their first appearance as an engaged couple, briefly posing for photographers on the grounds of Kensington Palace, hours after their engagement was announced.

Harry, wearing a blue suit and tie, said he was "thrilled" and that details about his proposal would come out later. He was then asked if the proposal was romantic, and he replied: "Of course!"

Markle, who said she was "so happy," was wearing an engagement ring for the first time in public. She held Harry's hand and rubbed his arm.

The "Suits" actress showed off her new bling which Harry designed himself. According to People, the center stone is from Botswana while the two diamonds are from his late mother Princess Diana.

The couple are expected to wed in the spring of 2018, Kensington Palace announced through Harry’s father, Prince Charles, on Monday. The couple got engaged in London earlier this month after meeting in the summer of 2016 through mutual friends.

"His Royal Highness the Prince of Wales is delighted to announce the engagement of Prince Harry to Ms. Meghan Markle,” the statement read. “His Royal Highness and Ms. Markle became engaged in London earlier this month.”

It continued: “Prince Harry has informed Her Majesty the Queen and other close members of his family. Prince Harry has also sought and received the blessing of Ms. Markle’s parents.”

The statement said the couple will live in Nottingham Cottage at Kensington Palace. The upcoming wedding will be the first grand royal wedding since Prince William and Kate Middleton got married in 2011.

William and Kate, who are expecting their third child, said in a statement they were excited for the couple, adding “it has been wonderful getting to know Meghan and to see how happy she and Harry are together."

Markle's parents, Thomas Markle and Doria Ragland, also issued a statement saying they were "incredibly happy for Meghan and Harry."

"Our daughter has always been a kind and loving person. To see her union with Harry, who shares the same qualities, is a source of great joy for us as parents," they said in a statement released by Kensington Palace.

Markle, best known for her role as Rachel Zane, an ambitious paralegal in the hit U.S. legal drama "Suits," fueled rumors that a move to London and an engagement were imminent when she packed up her belongings and moved out of her Toronto apartment last week after wrapping up filming for the series. Days later, she was spotted in London shopping for Christmas. It’s still unclear if she will return to “Suits” for the eighth season, but several reports indicated the seventh season was her last.

The couple has kept their high-profile relationship mostly quiet and have made only one official appearance out together, at the Invictus Games ─ a sporting event for wounded service personnel that Harry spearheaded ─ in Toronto in September. They held hands and smiled as they arrived for a tennis match. Several days later, Harry was photographed kissing Markle on the cheek as he joined the actress and her mother in a luxury box to watch the event's closing ceremony.

The couple quietly dated for the first few months after meeting until Kensington Palace and confirmed they were a couple last November. But the news also came with a stern warning to the press. The prince pleaded for reporters to stop intruding on his girlfriend's privacy. He condemned "outright sexism and racism" in some online comments, and said some articles with "racial undertones" had crossed the line.

Markle surprised many observers when she shared her feelings for Harry in a September cover story for Vanity Fair. It was the first time she addressed her relationship publicly and called the prince her “boyfriend,” saying: “We’re a couple. We’re in love.”

Meghan Markle and Prince Harry will have the first grand royal wedding since Prince Williams married Kate Middleton in 2011. (AP)

"At the end of the day I think it's really simple...we're two people who are really happy and in love,” Markle said.

Markle admitted dating Harry “has its challenges,” and that her life changed at a surprisingly fast rate.

Meghan Markle, right, watches the closing ceremony for the Invictus Games with her mother. (Reuters)

“But I still have this support system all around me, and, of course, my boyfriend’s support,” she added. "Personally, I love a great love story.”

Harry ─ once known for his "bad boy" antics, including being photographed playing strip billiards in Las Vegas ─ has largely won over the British public with his winning smile, his military career and his devotion to charities aimed at helping disabled veterans and other causes. The 33-year-old prince recently won praise with his work campaigning for more openness about mental health issues. Speaking candidly about his personal struggle to cope with the loss of his mother, Princess Diana, when he was only 12, he encouraged others to talk about their own problems rather than keeping them bottled up inside.

Markle’s career has included small parts on TV series including "Fringe," "CSI: Miami," "Knight Rider" and "Castle," as well as movies such as "Horrible Bosses." Outside of acting, Markle founded a lifestyle blog called TheTig.com (which closed down in April without explanation), and has lent her celebrity status to humanitarian causes.

She has campaigned with the United Nations on gender equality, written in Time magazine about girls' education and the stigma surrounding menstruation, and has traveled to Rwanda as global ambassador for the charity World Vision Canada. She has described how her mother took her to the slums of Jamaica to witness poverty first-hand, saying experiences like that shaped her social consciousness and charity work.

To some degree that mirrors the experience of Harry, who was also inspired by his mother's humanitarian work and embraced the types of charities Diana favored in the final years of her life before her 1997 death in a Paris car crash.

Some tabloids had alluded to Markle's mixed-race heritage, pointing out she has an African-American mother and a white father. Markle herself has spoken out about coming to terms with being biracial -- both growing up, and in her Hollywood career. In a March interview with Allure magazine, she said studying race at college was "the first time I could put a name to feeling too light in the black community and too mixed in the white community."

"For castings, I was labeled `ethnically ambiguous,'" she said.

Markle married film producer Trevor Engelson in 2011, but the pair divorced two years later. It wouldn't be first time that a British royal has married an American -- or a divorcee. In 1936, Edward VIII famously abdicated after he was forced to choose between the monarchy and his relationship with twice-divorced American socialite Wallis Simpson.