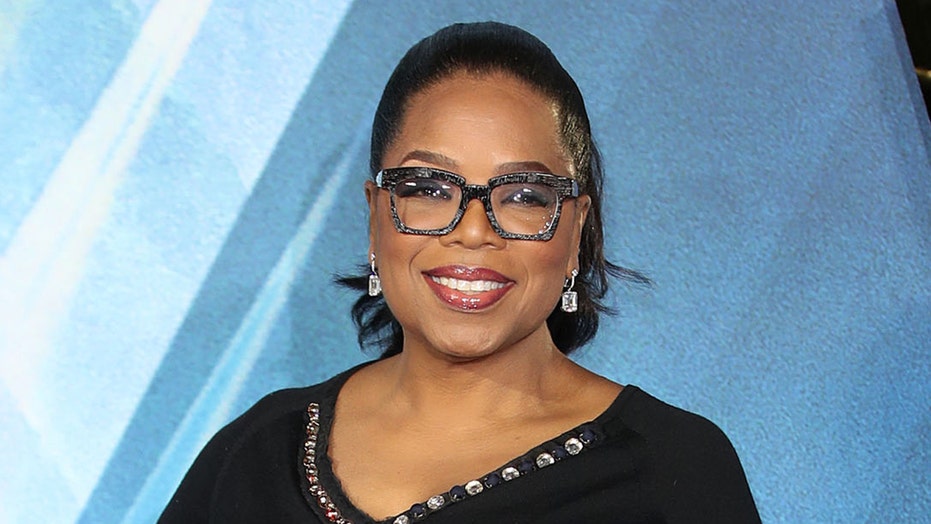 Famous for decades, millions of viewers are on a first-name basis with Oprah Winfrey.

With a career that includes acting, producing and magazine publishing -- plus more than two decades hosting her own daytime talk show -- Winfrey is no stranger to the spotlight.

Here are some of Oprah's biggest moments, as she celebrates her 66th birthday on Jan. 29.

Winfrey garnered an Oscar nomination for her supporting role in the Steven Spielberg film “The Color Purple,” released in December 1985.

Her film career doesn’t stop there: She has also appeared in projects in which she was a producer, such as the 1998 film “Beloved,” the 2014 drama “Selma” and the OWN television series “Greenleaf.”

FILE - In this Oct. 17, 2016 file photo, Oprah Winfrey attends the world premiere of "BOO! A Madea Halloween" in Los Angeles. Winfrey has agreed to give commencement speeches at colleges in Massachusetts and New York. (Photo by John Salangsang/Invision/AP, File) (The Associated Press)

“The Oprah Winfrey Show” entered national syndication in September 1986 with the episode “How to Marry the Man/Woman of Your Choice,” the Washington Post reported.

Winfrey's show would spend decades reaching American homes -- and more than 40 million people in the U.S. were tuning in weekly when it went off the air in 2011, NPR reported.

In November 1986, Winfrey revealed that she'd been raped as a 9-year-old girl. The talk show host became a voice for sexual abuse victims in the wake of the show.

“You see there really is no darker secret than sexual abuse,” Winfrey said on her program at the time. “I’m telling you about myself so that maybe the closet where so many sexual abuse victims and their molesters hide might swing open just a crack today and let some light in.”

Oprah Winfrey has no regrets about not becoming a mother. (Reuters)

Winfrey, who dropped from 212 pounds to 145 pounds, brought a wagon containing 67 pounds of animal fat onto the stage in November 1988.

Winfrey later expressed regret for the so-called “wagon of fat.”

“When I look at that show, I think it was one of the biggest ego trips of my life,” Winfrey told “Entertainment Tonight” in 2011. “When I look back at that, I think ‘mistake’ in many ways.”

Seven years after revealing she had been raped as a young girl, Oprah took her sexual abuse struggles to Capital Hill in an effort to combat child predators.

In 1991, Winfrey testified before the U.S. Senate Judiciary Committee in support of a national database of convicted child abusers. In her testimony, she said, "I am speaking out on behalf of the children who wish to be heard, but whose cries, wishes and hopes often, I believe, fall upon deaf or inattentive ears."

The National Child Protection Act, also known as the "Oprah Bill," was signed into law in 1993.

Winfrey held a wide-ranging live interview with Jackson in February 1993, about six months before allegations of child molestation surfaced that August.

Jackson, who was accused of molesting a 13-year-old boy, paid a reported $20 million settlement but denied wrongdoing, and no charges were filed.

“People wonder why I always have children around,” Jackson said in the Winfrey interview. “It’s because I find the thing that I never had through them. Disneyland, amusement parks, arcade games -- I adore all that stuff because when I was little, it was always work, work, work.”

Winfrey revealed the start of Oprah’s Book Club on her show in September 1996.

“When I was growing up, books were my friends,” she said at the time. “When I didn’t have friends, I had books. And one of the greatest pleasures I have right now in life is to be reading a really good book and to know I have a really, really good book after that book to read.”

Books like Janet Finch’s “White Oleander” and Jacquelyn Mitchard’s “The Deep End of the Ocean” -- the first book club selection ever -- gained prominence after being featured.

James Frey's "A Million Little Pieces" saw major sales after it was selected for Oprah's Book Club, but the author was later confronted by Winfrey when he admitted to fabricating parts of his memoir.

"I feel duped," she told Frey on her talk show in January 2006. "But more importantly, I feel that you betrayed millions of readers."

“Aren’t they the softest things you ever had on?” a pajama-clad Winfrey asked audience members, who were also in pajamas. The talk show host would become known for her “Favorite Things” gift guide episodes.

Her show is now off the air, but the list endures: 2017's "Favorite Things" included a $35 set of English muffins.

FILE - In this Jan. 7, 2018 file photo, Oprah Winfrey poses in the press room with the Cecil B. DeMille Award at the 75th annual Golden Globe Awards in Beverly Hills, Calif. Winfrey will interview two men who say Michael Jackson sexually abused them as boys immediately after a documentary on the men. HBO and the Oprah Winfrey Network announced Wednesday that “After Neverland,” will air on both channels Monday at 10 p.m. Eastern and Pacific. (Photo by Jordan Strauss/Invision/AP, File)

Already a Daytime Emmy winner, Winfrey was honored with the Lifetime Achievement Award at the Daytime Emmys in May 1998.

“I want to thank everybody who’s nurtured me, who’s stood in the gap for me,” Winfrey said in her speech, before speaking about her partner Stedman Graham, whom she called “the sweetest man with the greatest integrity.”

In 2000, Oprah scored big with the hit made-for-TV film, "Tuesdays with Morrie."

Based on the book of the same name by Mitch Albom, the film starred Jack Lemmon and Hank Azaria, with Oprah serving as executive producer. Oprah was ultimately presented with the Primetime Emmy Award for Outstanding Made for Television Movie for the film.

Winfrey was an early investor in the female-oriented Oxygen network, and even appeared on the channel in a 12-part program about the internet, The New York Times reported.

The channel launch kicked off in February 2000 before NBC bought it in 2007.

Oprah Winfrey with Rosie O'Donnell, who holds a copy of "O, the Oprah Magazine." (Reuters/Brad Rickerby)

The women’s magazine “O, The Oprah Magazine” launched in April 2000.

The magazine, which typically features a photo of Winfrey by herself on the cover, continues to be published. It has covered topics like lifestyle, wellness, fashion and beauty.

Winfrey became the first black woman on the Forbes billionaires list, entering at No. 427 with a net worth of $1 billion, the AP reported at the time.

During the season 19 premiere of “The Oprah Winfrey Show,” 276 audience members were given Pontiac G6 cars.

“The audience had been secretly handpicked by my staff in part because each one needed a car,” Winfrey has said.

“The crowd went berserk. Just for the occasion, we brought in EMTs who were standing by in case someone's heart started palpitating a little bit too quickly.”

Though a massive giveaway, the new vehicles were reportedly subject to taxes.

OPRAH WINFREY ON NEVER MARRYING OR HAVING CHILDREN: 'I HAVE NOT HAD ONE REGRET ABOUT THAT'

In a May 2005 appearance on Winfrey’s show, Cruise jumped up onto the on-set couch while talking about his then-girlfriend Katie Holmes. Cruise's behavior on the show made headlines and was also parodied in the 2006 film “Scary Movie 4.”

Looking back on the interview, Winfrey told TV Guide, “Certainly I did not think that it would turn into the brouhaha that it did. He was in love, he was very happy about it, he was on a show, he knew me, he came to play -- that was it.”

In 2007, the Oprah Winfrey Leadership Academy for Girls opened in Henley-on-Klip, South Africa. The school serves hundreds of girls from deprived backgrounds and provides them with an education.

In an interview with the Washington Post, Oprah said, "I think the reason not just Africa but the world is in the state that it is is because of a lack of leadership on all levels of government ... and particularly in regard to schools and schooling for poor children."

"The best way to effect change long term is to ... give children exposure and opportunity and nurture them to understand their own power and possibility," she continued.

OWN: Oprah Winfrey Network launched as a joint venture between Discovery Communications and Winfrey’s production company in January 2011.

Discovery announced in December 2017 that it purchased a majority stake in the network, which features both reality shows and drama series like the Winfrey-produced “Greenleaf” and “Queen Sugar.”

The last episode of “The Oprah Winfrey Show" was broadcast May 25, 2011, after a blowout final season.

“I won’t say goodbye,” Winfrey told the audience during the finale. “I’ll just say … until we meet again.”

Then-President Barack Obama presented Winfrey with the Presidential Medal of Freedom in November 2013.

"Oprah’s greatest strength has always been her ability to help us discover the best in ourselves," Obama said during the ceremony.

Winfrey was one of the producers of a revival of the Broadway musical “The Color Purple” -- and nabbed a Tony for Best Revival of a Musical.

She was also one of the producers when the musical first opened on Broadway in 2005.

Winfrey was honored during the 2018 Golden Globe Awards with the Cecil B. DeMille Award -- but she turned the attention to civil rights and the #MeToo movement in her acceptance speech.

The media mogul referenced Recy Taylor, a black woman from Alabama who fought for justice after she was raped by six white men in Alabama in 1944. Taylor died last month at the age of 97.

Winfrey expressed gratitude for Taylor and all the women who were silenced when they spoke out about powerful men, the women who worked in factories, farms, as domestic workers and in academia, whose names will never be known.

"For too long, women have not been heard or believed if they dared to speak their truth to the power of those men," Winfrey said.

She ended on a hopeful note, saying "a new day was on the horizon" because of people, some of whom were in the Golden Globes audience, who will "take us to the time when nobody ever has to say, 'Me too,' again."

Winfrey's speech at the awards show had some fans and fellow celebrities calling for her presidential run.

Graham told the Los Angeles Times that "it's up to the people" whether his longtime partner will be president, adding "she would absolutely do it."

Rocking a cream-colored Stella McCartney dress, Oprah turned heads with the stunning dress while showing no signs of age.

“You couldn’t be in that chapel, or even watching from afar and not feel the power of love,” she said.

Oprah received the honor of gracing the August 2018 cover of British Vogue.

Rocking a slicked back bun, bright earrings and a white silk dress, Oprah described appearing on the cover as a “regal experience.”

Oprah released her sixth book, titled “The Path Made Clear,” in April 2019.

The book is a self-help piece that helps readers discover their true purpose in life -- to which Oprah says, “Your real job in life is to figure out as soon as possible what that is, who you are meant to be and begin to honor your calling in the best way possible.”

In an Instagram post hyping the release, Oprah notes that the books is “great for graduates trying to figure out what’s next ... or anyone who’s questioning or needs reassurance on the Path you’re on now.”