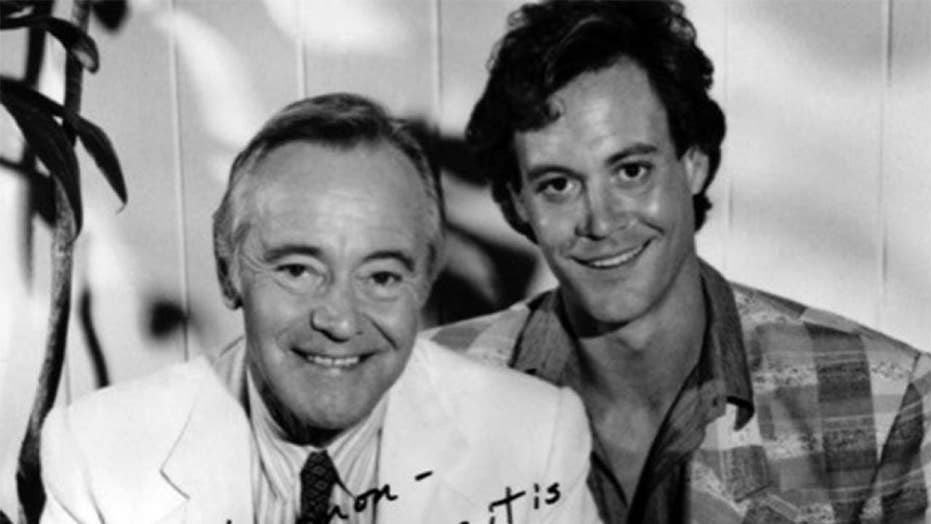 Chris Lemmon the son of actor Jack Lemmon says his father almost missed out on the film ‘Some Like it Hot,’ in new book.

The two-time Oscar winner, still celebrated for his comedic roles in 1959’s “Some Like it Hot” and 1960’s “The Apartment," passed away in 2001 at age 76. His 64-year-old son, who also went on to pursue acting in Hollywood, chronicled his relationship with the iconic patriarch in the 2006 memoir “A Twist of Lemmon.”

In honor of “Some Like it Hot,” which turns 60 on March 29, Lemmon spoke to Fox News about how Jack almost missed out on the famous role, befriending Marilyn Monroe and why he followed in his footsteps.

Fox News: When did you realize your father was different?
Chris Lemmon: I was a little kid going to Calthorpe School in Santa Monica, attempting to do a chin-up bar. Some kid comes running up to me and says, “See that kid over there? That kid’s father is more famous than your father because he plays Jim West on ‘Wild Wild West.’ Then he runs away victoriously. I thought about it for a second and yelled, “Of course he’s more famous, he plays Jim West!” Then I thought about it again.

I didn’t know my father was famous. I just thought he was a movie actor. And that’s the exact moment that I realized that there was something different about my father. I knew people adored him wherever he went. I knew he was just an unbelievably charismatic man that was more than fun to be with and for that reason people treated him differently. But I never got the fact that he was an icon, that he was that everyman on screen and off. That people would take time out of their lives to go and lay a dime on the counter to watch. Even so far as to give Academy Awards to, the highest honor an actor can receive. That’s the moment I realized it.

Fox News: Is it true your father was not considered for the role of Jerry/Daphne in “Some Like it Hot”?
Lemmon: It’s true! They didn’t think pop was a big enough star. So the role was offered to Jerry Lewis who turned it down because he said drag just isn’t funny! But during Oscar time, Jerry sent pop a box of chocolates. The role was originally given to Jerry Lewis who turned it down. But then they got Marilyn for the film. It was all the star power they needed. And as for the script, I don’t think they knew what they had at the time. They knew it wasn’t "Gone with the Wind." But it has still remained as the number one comedy of all time.

Marilyn Monroe, left, and Jack Lemmon on the set of "Some like It Hot."

Fox News: What was your father’s relationship like with Marilyn Monroe?
Lemmon: It was terrific. He saw Marilyn for what she was, unlike the persona. … Marilyn had her own gimmick. But that wasn’t her at all. She was a very dedicated actress and a very intelligent woman. But also a very troubled woman who was hit by stardom way too quickly. She just simply didn’t know what to do with it. So my father instantly took to her because he saw those qualities. My father easily took to everybody. Jack Lemmon could get along with a log.

Fox News: How did your father cope with Marilyn’s troubles on set?
Lemmon: The truth is Marilyn did have some problems on the set. She was nervous that it could get in the way. There’s that famous story involving the line, “Hi, I’m Sugar.” She had to do 30 takes of that. That was the day before they shot that huge scene in the train car with the booze. Billy tended to be very rough with his shots. He didn’t want anyone messing around with his stuff.

But she and my father, they nailed it on the first take. That’s the performance you see on the screen. He easily befriended her. She was flirty with him because she thought it might bring some spice into the scene. And of course, he flirted right back. And that’s how that great scene between them was born. That was all one take.

1958: Marilyn Monroe and Jack Lemmon on the set of the film "Some Like it Hot" in Los Angeles. (Photo by Richard C. Miller/Donaldson Collection/Getty Images)

Fox News: In your memoir, you described seeing John F. Kennedy and Marilyn together in her house. Is that true?
Lemmon: That's true too! As a kid, I was walking outside and saw a helicopter. I thought this is something that needs to be investigated. I knew every secret passageway so I sneaked my way through. …  I’m seeing this helicopter flying over Marilyn’s house, which was a few houses away from ours, with a bunch of guys wearing dark glasses and dark suits standing along the way. So off I go. And sure enough, I arrive by Marilyn’s pool and there is this blonde lady frolicking in the water with a very distinguished-looking gentleman. That’s when one of the men caught me and deposited me to the front porch of my house.

My father and mother come running out and go “What the hell is going on?” I asked my parents who were those people. My mother goes, “Ms. Marilyn has a very important visitor. And knowing how curious you are, you’re going to go back over there, so don’t get caught.” So that’s the story. Yes, indeed it was John Kennedy frolicking in the pool with Marilyn. As far as I know, there was no hanky panky going on. This is a very innocent story. His cousin Pat Lawford lived next door. So he’d come over all the time and visit. He would go out to the beach, play football with the kids, go swimming. It was a whole different time. One that will never exist again.

Fox News: Your parents divorced in 1956. How was life at home?
Lemmon: He adored my mother and never stopped adoring her even after they divorced and he remarried. The divorce happened because of a mistake, a typical Lemmon mistake. We Lemmons tend to get a little carried away. When he won his first Oscar, he was so carried away that he went backstage and all of a sudden, the paparazzi are flashing their lights, questions are going and champagne is flying. All the stars are back there. And in the meantime, he completely forgot about my mother. He left her sitting on the auditorium. She eventually had to take a taxi home alone. There were other things going on, like in any relationship, but she never really forgave him for that.

That’s when the bond was broken. And he never forgave himself for it. He never stopped loving her. But she moved down to a really nifty place on Santa Monica beach, which was owned by Harold Lloyd. … We lived there for about 10 years and it was an incredible time. And my father, because he adored my mother so much, used to come over just about every day on the pretense that he was going to teach me how to play the piano. Of course, it ended up just him playing the piano and teaching me for about 3-4 minutes and then hanging out with my mother for a few hours. It was strictly platonic at that point. There was no hanky panky after the divorce. But they adored each other.

Fox News: What made you, the son of Jack Lemmon, pursue acting?
Lemmon: Stupidity. Outright stupidity and ignorance! And I’m not joking *laughs*. You know what, I couldn’t do anything else. That’s what made me pursue it. It was the only thing I was really good at. I tried to become a classical pianist. I’m pretty good, but I’m no concert pianist. I tried to become a freaking ballet dancer *laughs* now there was a comedy of errors! Oh good lord, that was not a great career choice. … So I worked as an actor for a number of years.

What I did was certainly not near the caliber of what my father did. But hey, I made a living. However, what was important to me was to marry successfully and raise kids. I’m happy to say I walked the walk. My wife and I just celebrated our 30th anniversary. Our three kids are doing great. I couldn’t be prouder of them. That became more important. So I decided to leave Hollywood and reinvent myself and go to Connecticut and take a household there. I then decided to become a writer and producer. …. I turned my book into a one-person show for five years.

Chris Lemmon during Chris Lemmon Party for His Book "A Twist of Lemmon" - May 16, 2006 at Book Soup in Los Angeles. (Cesare Bonazza/WireImage/Getty)

Fox News: Jack spoke about his alcoholism during a 1998 interview. Could you describe that moment when it was clear your father needed help?
Lemmon: I was there when it happened. I had gotten a call from the maid saying, "You have to come over here right now." I arrived and pop was a mess. He had been drinking all night and trying to sleep it off but couldn’t. He drops a glass and he literally fell down on it and his head was cut open in the back. He was slurring, the whole nine yards. … I called up AA and he never looked back. I can vouch for him. He never had a drink after that. … It saved his life. And he moved on to a new chapter in his life, one that didn’t include alcohol.

Little Christopher Lemmon is wide-eyed at the playing of his father, actor Jack Lemmon. Lemmon was taking time out from the filming of the movie "Phffft" to hold two-and-a-half-month-old Chris for his camera debut. — Getty

Fox News: What are some of your favorite memories involving Jack Lemmon?
Lemmon: It’s funny, he was very shy about getting too close to anybody. Me, the dog — well the dog he got close to. But he was not that kind of guy who would have heartfelt conversations. He was a terrific pianist. We would sit down and play the blues all night long. But I think my greatest experiences with my father were not really verbal. They were just being with him.

I remember being in the most incredible places with this most incredible man. Fly fishing in Alaska. Just the two of us. He would tell his favorite joke for the 74 time … Or being on the course of Pebble Beach playing golf. … He would make a great shot and he would just look up the heavens and say, “Now that’s a touch of terrific!” Or the time I play in the celebrity tournament. My opponent was Mark freaking McGwire. …  Pop saw that. I stopped at took a look. There he was with his potbelly sticking out and giving me that smile that said, “Welcome to Pebble kiddo.” Those were the moments.

Fox News: What is life like for you today?
Lemmon: I’m retired. In late 2018, I became sick. It hit me like a baseball bat across the forehead. I have a lung condition called IPF, idiopathic pulmonary fibrosis. I immediately needed a double lung transplant. And miraculously, my doctor announced he had a set of lungs for me. That’s why I’m alive. I was cut in half, given two new lungs and I lived.

I have to get myself back up to par. I now live in San Diego. And at our age, it was time to think about a new direction anyway. … But I realized it’s time to write another memoir about this journey. … And how people can give life in death, which is organ donation. It’s remarkable. I already started sketching it and hopefully, it will come in 2020, 2021. That's the next chapter of my life.