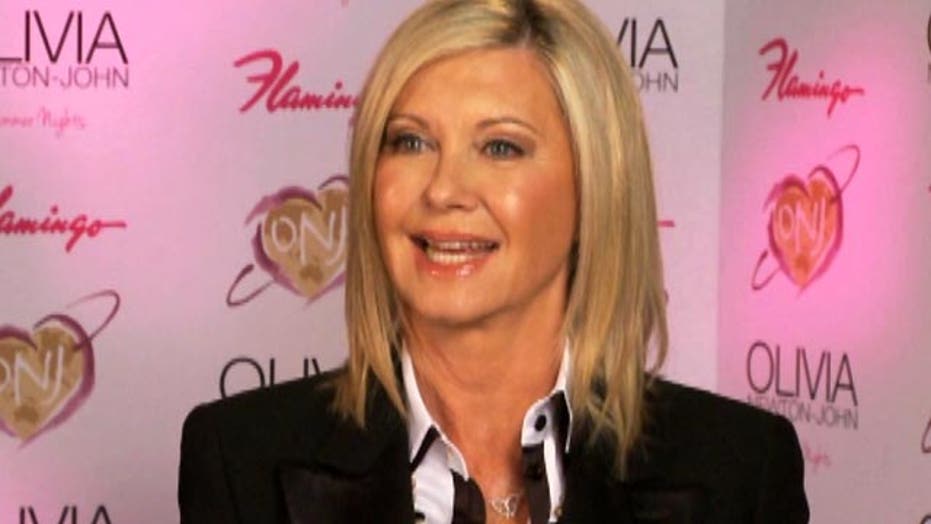 Olivia Newton-John is the latest star to hit the Las Vegas strip. Her "Summer Nights" show officially opens April 8th at the Flamingo hotel, and the big question on a lot of people's mind: Where's John Travolta?

Newton-John said he sent her a personal congratulatory message and would be thrilled to have Sandy and Danny reunite on stage. "I'd be up for it if he turns up," Newton-John said.

"People are here to have fun and they're from all different walks of life and different countries and it's always a different experience," Newton-John said.

Getting wild is something many people do for fun in Las Vegas, and the veteran singer is no exception to the rule. She said she's had a crazy night in Sin City before.

"Probably with some friends when I wasn't working we've been here and gone to some shows and we went to Chippendales and I took my sister to Chippendales that would probably be the wildest memory I would think," Newton-John said.

Generally, however, she's more tame. Though her biggest hit, "Let's Get Physical," did cause some controversy when it first came out and was the No. 1 best-selling single of the '80s.

She now laughs at the scandal that surrounded the song, which was considered edgy at the time. She says female artists today are under much more pressure.

"For me it's about the music. If it's a great song then it's going to sell itself anyway," Newton-John said. "But it's a very competitive world. I'm so grateful I started when I did because these girls I think are probably pushed to get wilder and wilder to get noticed."

Her new show aims to take the audience down memory lane, she explained.

"It's me and my music, whatever that is," Newton-John said. "So, it's a walk through my music and my life so some of the songs are up-tempo and some are ballads."

Newton-John said some of her fans might only know her for "Grease" music. This show will give them a chance to see her perform some of her hits from "Xanadu" and some of her newer tunes.

"We called it 'Summer Nights' because I think people are going to expect that because a lot of people don't know I had music before or after that, which is great," Newton-John said.

Newton-John, 65, will perform five shows a week. She's already preparing her voice with daily exercises and some advice from the doctor.

"Humidifiers everywhere and I was told to keep my voice up like this when I'm talking to you because that protects your throat too," she said. "Isn't that interesting?"

Newton-John is one of a few artists whose career has lasted for decades. She credits her fans.

"I have fans who have been coming to my shows for like 30 years," she said. "I've seen them have children and grandchildren. It's really wonderful. I'm very grateful that I've had such a long career. I never dreamt that I'd be so lucky."