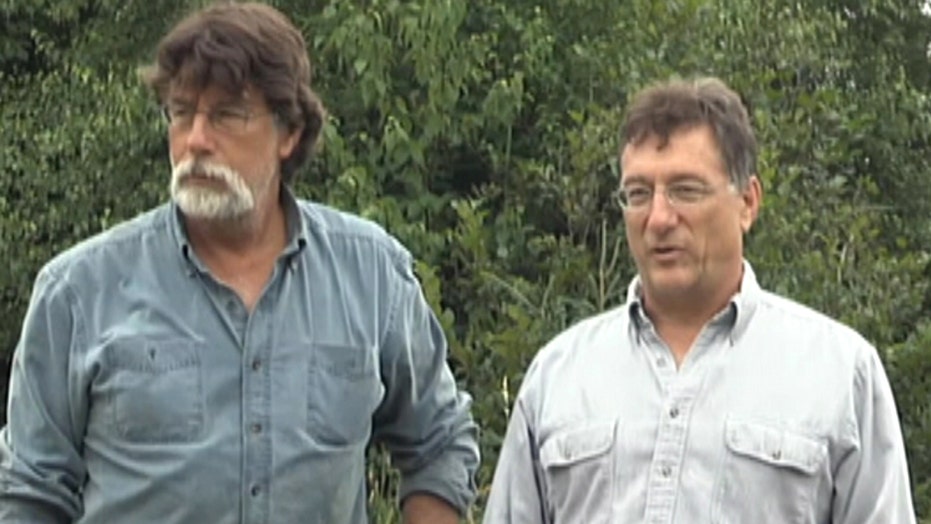 In the Zone: 'The Curse of Oak Island' stars Rick and Marty Lagina share their theories about what lies in the money pit

Adventurers, treasure seekers – even an ex-president – have been drawn to Oak Island for centuries, wondering what lies in the mysterious money pit on the remote island off the coast of Nova Scotia. Now brothers Rick and Marty Lagina are breaking ground in the third season of their History Channel show "The Curse of Oak Island." They spoke to FOX411 about what lies beneath the surface, and the spooky happenings on the Island.

Marty Lagina: You’re gonna start right out with that? Jumping right in there.

FOX411: Well, isn’t that what everybody wants to know?

Marty: Yeah, it is. Rick, why don’t you field that one?

Rick: You know, I guess the key statement to make is stay tuned. You know, we spent the last five months doing some investigative discovery work.  We’re excited about it. We really are.

Marty: Oak Island is a tough puzzle though.  People have been looking there for 220 years some of them relatively sophisticated, we have more modern devices.  It’s a tough nut.  We’re getting there though.

FOX411: Hmm, yeah. You’re getting there but what has been the strategy of this excavation site?

Marty: There are three sort of principle targets on Oak Island.  There’s the money pit itself where people have been flummoxed for years, and then there’s this bore hole 10x was dug by Dan Blankenship who’s been a treasure hunter for 50 years and that has some real intriguing stuff in it, and there’s the swamp to all indications is kind of a manmade feature and may have been put there to hide something so those are our three main areas.

Marty: Well, he’s, he’s…I was gonna use a bad word.  He’s a little more ummm impulsive than let’s say I am. He wants to just jump in there and go, and I want to say, “Wait a minute, wait a minute let’s make sure we know what we’re doing here.”

FOX411: With Oak Island and all of the rumors, there’s also been a lot of paranormal societies and people who believe that there’s a lot going on beneath the surface.  Have there been any spooky encounters that you’ve come across in your dig or diggings?

Marty: You know what, the rational part of me doesn’t believe in any of that but I still end up kind of the irrational part , you know, I have been spooked on Oak Island myself.

Marty: It’s a funny story if you want to hear it.

Marty: So, one night I said, “Rick, let’s get to the bottom of this so it was dark…make this quick…drove back to the money pit area and I said, “You go on, I’ll stay here.”  You know, I’m such a, a, you know, I’m such a non-coward I kept the car but anyway he left, and I was out there no more than ten minutes and I sort of hear this really weird shriek and it just made my blood curdle, and I don’t know what that was, and whatever I came driving back.  He’s only walked about three blocks.

FOX411: You have judgment in your eyes.

Marty: And I came flying back so yeah it’s a spooky place.

Ricky: Yeah, it’s a spooky place and the other thing that’s really troublesome, don’t know if it’s associated with the paranormal but we have had many pieces of fairly sophisticated geophysical instrumentation that have failed for no reason, for no explainable reason that, that is uh umm befuddling. I mean we can’t explain it; all the tech reps they say can’t happen, won’t happen, has never happened and yet they’re in the field…equipment malfunction.

FOX411: Yeah, I’m not a geo expert in any way but I, I’ve heard that if a certain area has a lot of…I believe iron is the element…

FOX411: That it could really rattle…I’m just saying from a skeptic’s point of view, I’m open-minded but maybe that’s the reason, if not then it’s ghosts.

Marty:  It could be a magnetic feature.

Marty: The whole legend of Oak Island which starts 220 years ago starts with anomalous lights and these sorts of odd things happening and then these young boys go to explore and they find a depression in the ground and then you don’t have enough time.

FOX411: Oh 1795, I’m so sorry. There have been a lot of theories about who created the shaft, pirates, Knights of Templar.  Who do you guys think?

Rick: I don’t think we know.  Honestly, we don’t know. Who I would like it to be would be the Knights Templar given their historical connection. I mean it went from Seven Knights at Temple Mountain to 1097 to 1307 they were disbanded by King Phillip the Fair and um, the Pope and they disappear from the face of the Earth, they go from a nonentity to the most powerful entity on the face of continental Europe…gone in a whisper.

Marty: With treasure all over it…

Rick:  Wouldn’t that be wonderful. Let’s focus on the treasure I know in my heart of hearts there’s a wonderful story written on Oak Island long ago and I would like to write, I would like to fill those pages in.

FOX411: Do you worry that if you fill those pages in you might, I don’t want to say destiny as those that have disappeared but this is something that or somethings that don’t want to be found.

FOX411: So, you never worry about your safety digging for secrets?

Marty: Well, I worry about his safety. No, no.

FOX411: A new book from one of the founding members of the Friends of Oak Island claims that the Money Pit is nothing more than the remains of tar-making oven.

Marty: I don’t buy that one. I mean I’m the skeptic of the group. Rick is a true believer. ..believes there’s something historically very important there and I’m not so sure but I don’t buy that one. That doesn’t seem to fit with anything. There’s some things very hard to answer on Oak Island. There’s definitely very old coconut fiber there. I mean it’s an island off Nova Scotia, it ought not to be and we know for sure.

Rick: And that’s a given. That’s supported by science

Marty: We found it ourselves and there’s some old coins that have been found that pre-date the finding of the Money Pit but old tar? No, I’m not buying that.

FOX411: Just as we wrap up, will you just hypothesize or indulge me a little bit on what is underneath that booby-trapped area?

Marty: Well, look here’s what I’m willing to say in all candor something very odd happened on Oak Island a long time ago; something very odd that at present is still inexplicable. My big fear is there was some immense treasure there but they came and got it and that’s possible.

FOX411: So, we’re just going to see seasons of your show until…

Marty: No, we’ll get there sooner than that.