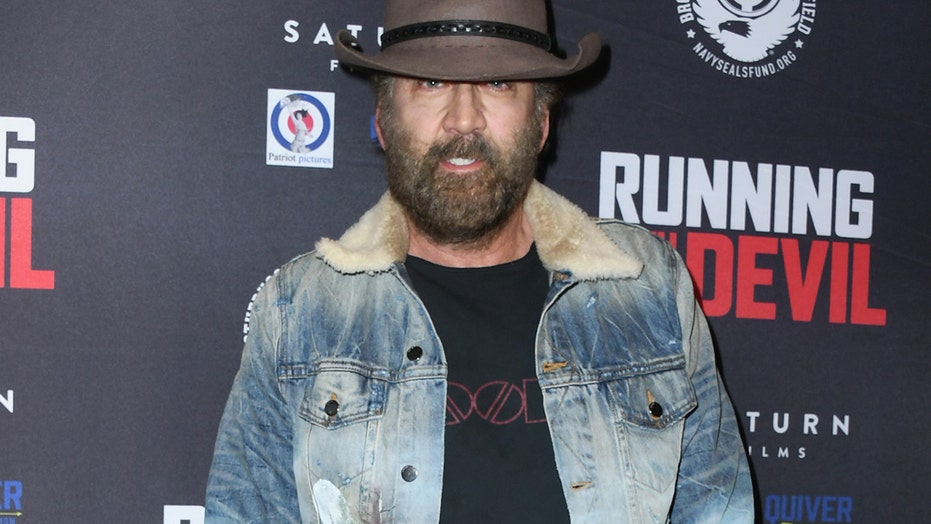 Nicolas Cage looked strikingly different at the premiere of his latest movie, "Running with the Devil."

The Golden Globe Award-winning actor, 55, showcased a new rugged -- and hairy -- look at the Writers Guild Theater in Beverly Hills, Calif. on September 16.

Instead of sporting his typical groomed look, Cage showed up unrecognizable to the event. Donning a full-fledged bushy beard, the "Mandy" star paired his new facial ‘do with a fur-trimmed jean jacket along with an "Indiana Jones"-esque fedora hat to enhance his transformation into a rugged, mountain man.

Cage was joined by his son Weston Cage to the premiere Of Quiver Distribution's newest film. Weston also sported a distinguished beard and slicked back his hair into a ponytail; however, it was his father's new look that stole the show.

"Running with the Devil" is an upcoming American action thriller movie about the CEO of a cartel who sends his most trusted henchman and master drug trafficker to uncover why his shipments of cocaine are being hijacked on the supply chain.

Nicolas Cage arrives at the premiere of Quiver Distribution's "Running with the Devil" at Writers Guild Theater on September 16, 2019, in Beverly Hills, Calif. (Joe Scarnici/FilmMagic)

The star has been devoting his time to his career after going through a divorce with his fourth wife Erika Koike, whom he was married to for four days. He tried to annul the union after four days, claiming he was "too drunk to marry" and that the union was based on a fraud, stating that Koike did not reveal that she was in a relationship with another person and did not disclose her criminal history.

According to TMZ's finding in court records, a judge in Clark County, Nev., granted them a divorce three months after the wedding.