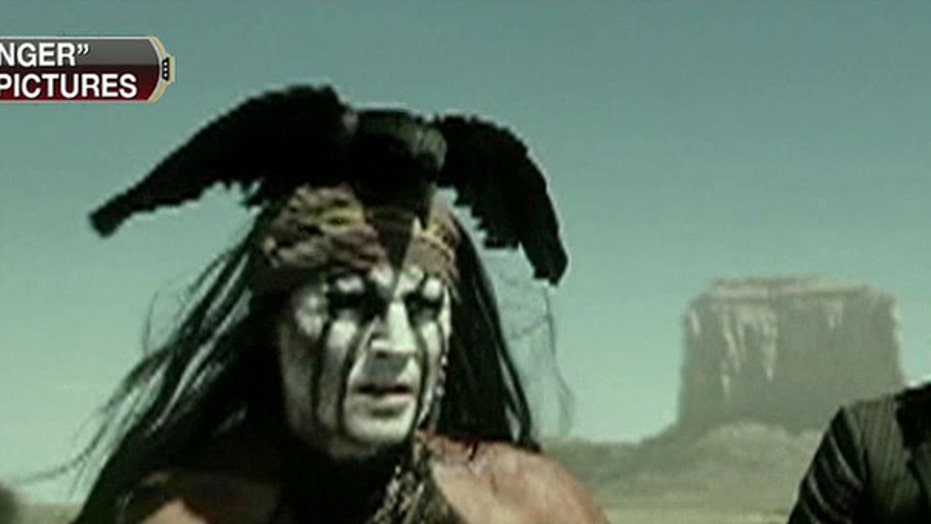 Is ‘Lone Ranger’ the Costliest Flop of the Summer?

“The Lone Ranger” was gunned down over the Fourth of July weekend, bringing Disney a paltry $50 million against its estimated budget of $215 million, not to mention its $175 million marketing budget.

Forecasters are now estimating the film will lose $150-200 million.

That’s a lot of mouse food.

But the studio might not be the only one whose bank balance suffers. Many industry insiders are now questioning whether its star Johnny Depp – front and center in “The Lone Ranger” marketing campaign – will be worth his $20 million plus per-movie salary going forward.

“The flop of ‘The Lone Ranger’ seems to be final proof that movie audiences have grown fatigued with Johnny Depp shoehorning his trademark character actor eccentricities into big budget tentpole films,” entertainment and pop culture reporter Scott Huver told FOX411’s Pop Tarts column. “What has happened is that the big franchise efforts have leaned too heavily on the basic appeal of Depp’s off-kilter approach freshening up mainstream fare and built too-flimsy structures around them. When they worked, as in the first ‘Pirates of the Caribbean’ film and some of his earlier works with Tim Burton, they added a layer of freshness and unpredictability to otherwise familiar territory. Now what’s familiar is having Depp mine peculiarities to prop up the commercial prospects of uninspired fare and failing to draw in a new generation of fans.”

Several other critics aren’t holding back, either, when it comes to the drop in Depp’s stock.

“Depp’s recent string of box office failures strongly suggests that the idea of the box-office guarantee is well past its due date,” read an article on The DailyBeast.com. TheWrap.com wrote that Depp has proven a “dicey money-making proposition” and noted that “studio executives acknowledge that Depp’s bankability has taken a shellacking.” And Vulture.com went so far as to posit the “young Johnny Depp would hate old Johnny Depp.”

While Depp is the only actor to star in three films that have crossed the $1 billion mark globally (“Alice in Wonderland,” “Pirates of the Caribbean: Dead Man’s Chest” and “On Stranger Tides”), his recent non-“Pirates” movies have bombed. Not counting “The Lone Ranger,” 2012’s “Dark Shadows” cost $150 million but grossed only $80 million, 2011’s “The Rum Diary” made $13 million on a $45 million budget, and that same year “The Tourist” tanked, recouping $67 million on a $100 million budget.

But not everyone thinks Depp is in trouble. Producer Gary Michael Walters argues “The Lone Ranger” won’t stand in Depp’s way long-term, but agreed it’s time he ditched the mascara and got back to meatier roles.

“Johnny is an extraordinary actor and will remain a hugely bankable international star despite the severe under performance of ‘The Lone Ranger.’ Some of the blame does need to be borne by the director Gore Verbinski and Johnny Depp for how they reinterpreted the story and the relationship between Tonto and The Lone Ranger, and there are signs of some audience pushback on Depp’s pattern of choosing highly costumed and heavily made up eccentric characters,” he said. “It would be wonderful to see Depp doing more grounded, realistic roles like ‘Chocolat’ or ‘Donnie Brasco’ or ‘Blow,’ where he can be so brilliant and lose himself in a character without all the external accoutrements.”

Back in the day, Depp did cement himself as one of the greats with stellar performances in independent/low budget productions like “What’s Eating Gilbert Grape” and “Edward Scissorhands,” but a source connected to the star told us his fame has made it difficult for anyone with a hearty, fulfilling script outside of the big studio circle to even get it into his hands.

Another industry insider agreed, explaining: “He is insulated by agents and a long litany of associates. His food chain is massive. When you are that big you can tend to generate project ideas yourself or take what the studio or big directors offer because those offers come with a big check.”

Meanwhile, we’re told the mood at Disney has been on the somber side since the disappointing debut of the costly “Lone Ranger.” “It’s this kind of weird quietness around the place,” said a source. “No one is saying a word about it.”

According to Madison Jones, co-founder of film company DePasse Jones, for their part the Disney big-wigs should have taken a page out of the 1999 Will Smith-starring “Wild Wild West” flop.

“The audiences for westerns only want serious, authentic characters and scenarios like ‘Unforgiven’ and ‘3:10 to Yuma,’” he added. “The moment you don’t take the characters seriously, there is no first target audience.”

Representatives for Depp and Disney did not respond to a request for comment.