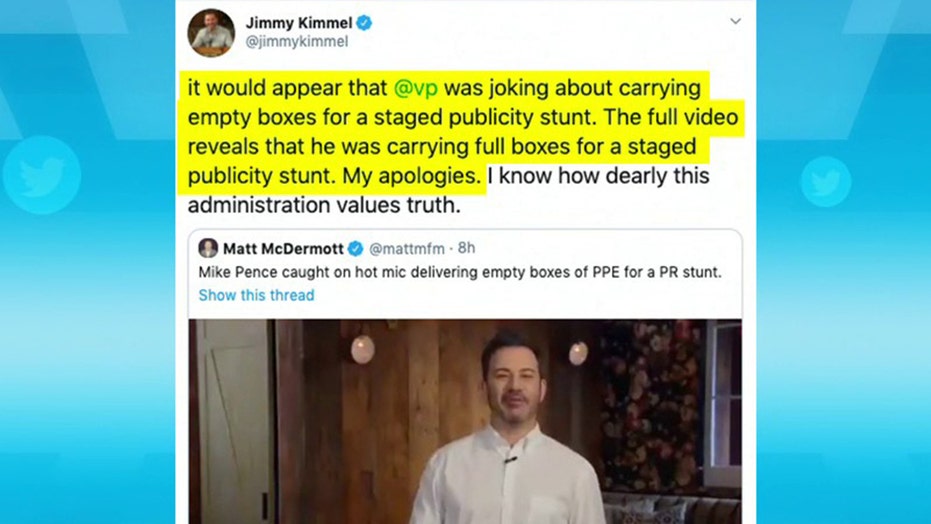 Jimmy Kimmel took a serious moment Tuesday night to address his "white privilege" in the wake of nationwide protests after the death of George Floyd in police custody, and while he spoke candidly about his recent revelations about racism, he did not mention his own history of wearing blackface.

"Over the past week, you know, I've been hearing, I've been reading some very thoughtful posts and words from very smart people, some of whom say white people shouldn't be talking right now, they should be listening," Kimmel began his monologue. "And I get that, I don't disagree with that, but I'm the only one here and it's a talk show. I want to share what I've been thinking about, trying to sort through."

Kimmel said he knows "a lot of white people bristle" about the subject of "white privilege."

"You hear the phrase 'white privilege' and it's easy to get defensive. The first time I heard it, I did," Kimmel said. "To me, white privilege was like what Donald Trump had -- a wealthy father and a silver spoon in his mouth. It wasn't what I grew up with, so I rejected it because I didn't understand what white privilege meant, but I think I do now..."

He continued: "Here's what I think it is: people who are white, we don't have to deal with negative assumptions being made about us based on the color of our skin... whereas black people experience that every day, like every day."

"And please don't tell me you don't ever make assumptions about people based on the color of their skin because I don't believe it. We all do, I know I have, I'm embarrassed to say it, but I have."

The ABC star suggested that what happened to Floyd while in police custody "happens all the time," and this incident happened to be caught on video, "shocking" him and other white people.

"Black people are like, 'Why are you shocked? We've been telling you this has been happening over and over again.' So if you're wondering why people are angry and why they can't just march nicely in the street holding up their signs in a single-file line, maybe that's why," Kimmel told viewers, later echoing something he read, saying: "White privilege doesn't mean that your life hasn't been hard, it just means the color of your skin isn't one of the things that makes it harder."

Despite his remarks, Kimmel failed to mention his repeated use of blackface during his tenure hosting "The Man Show" in the early 2000s, at times darkening his skin while impersonating former NBA star Karl Malone and daytime talk show host Oprah Winfrey.

Last week, Fallon tweeted an apology after a decades-old clip from "Saturday Night Live" was resurfaced of him wearing blackface while impersonating Chris Rock.

"In 2000, while on SNL, I made a terrible decision to do an impersonation of Chris Rock while in blackface. There is no excuse for this," Fallon tweeted at the time. "I am very sorry for making this unquestionably offensive decision and thank all of you for holding me accountable."

Fallon took the opportunity on his show this week to elaborate on his regret about using blackface.

“With ourselves, and looking at ourselves in the mirror. And I had to really examine myself in the mirror this week, because a story came out about me on ‘SNL,’ doing an impression of Chris Rock in blackface,” Fallon said, adding that he was “horrified” by the wake of disparagement and calls on social media questioning his character.

Fallon said he had to further his education on “how to stop the silence and the fear of saying the wrong thing,” and welcomed NAACP President Derrick Johnson and CNN anchor Don Lemon on his show, as Fallon said he wanted to be a “better ally.”