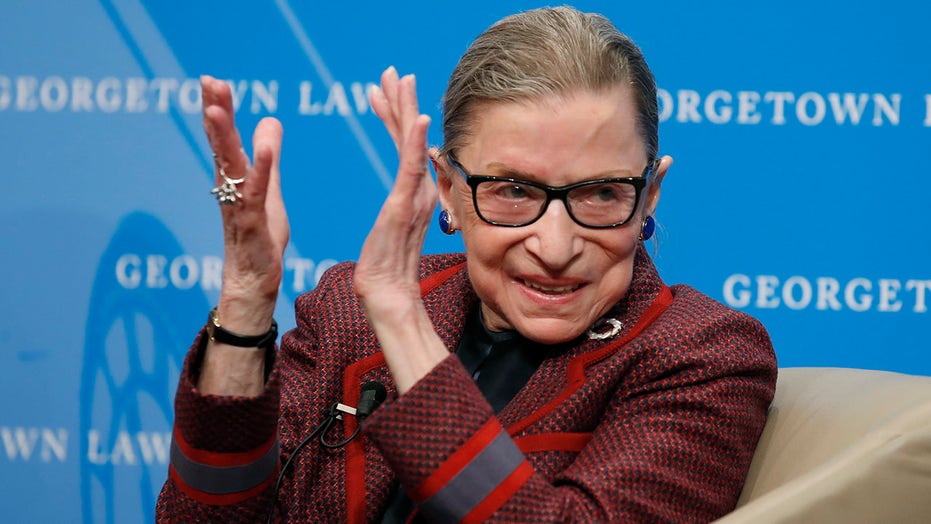 In the hours following Ruth Bader Ginsburg's death, the larger-than-life Supreme Court justice was immediately lauded as one of the most important women in history from all corners of the world.

She passed away on Friday at the age of 87 from complications surrounding metastatic pancreatic cancer. Her inconceivable passing led Hollywood stars to pour over the justice's illustrious movements in women's rights and gender equality Friday night into Saturday morning, and her admirers are being reminded once again of the two films that shone a light on her legacy far before she left the physical realm -- "On the Basis of Sex" and "RBG."

The latter is a 2018 biographical film about her life. Its directors, Betsy West and Julie Cohen, earned themselves an Academy Award nomination for their work on "RBG," which even features a cameo from Ginsburg, who is rout with laughter watching Kate McKinnon's impression of herself on "Saturday Night Live."

West and Cohen reacted to the loss of the pioneer on Friday, telling Fox News in a statement:  "Like so many Americans, we are crushed by the death of Justice Ruth Bader Ginsburg. Even had she not become a Supreme Court Justice, Ginsburg earned a place in history for what she did to win equally for American women."

The statement continued: "When we asked her several years ago how she wanted to be remembered, she said with characteristic modesty, 'Just as someone who did whatever she could, with whatever limited talent she had, to move society along in the direction I would like it to be for my children and grandchildren.'"

The directors previously spoke of what it was like to initially pitch their idea of the documentary to the enigmatic justice in January 2015. In an interview with Entertainment Tonight in 2018 ahead of its release, West and Cohen confirmed "RBG" was the first documentary that focused solely on Ginsburg. They revealed Ginsburg did not say "yes" or "no" to the idea.

"Essentially, it was a 'not yet,'" Cohen told the outlet, while West added that the justice's response was "very polite."

The directors said they made some tweaks on their pitch, informing Ginsburg that they would not need to interview her right away. The justice's response came quickly.

From there, the directors were in pursuit of finding the most appropriate people to interview. They shared they were surprised to learn that not only was Ginsburg unopposed to the documentary, she actually began supplying the two with names of people to interview.

Waiting a whole two years to interview Ginsburg paid off. West said this "really allowed us to get everything in order, to do all the interviews, to do all the archive research and to structure the film so that by the time we interviewed her in the summer of 2017, we already had a pretty finely honed rough cut."

The directors spent a total of 20 hours with Ginsburg over a year and a half. They described the justice as "intimidating" and unpredictable.

"Justice Ginsburg is a serious-minded and presents herself quite seriously and quiet and somberly, so any moment of emotion that comes from her almost feels like a surprise. Whether it's her loving feelings toward her late husband, her children and grandchildren, or frankly, her humor," Cohen reflected at the time.

Ginsburg's humorous side fully came out when she belly laughed at McKinnon's impression.

"To see her have so much humor and even when it's kind of humor at her own expense, was surprising," Cohen said. "It's not like we expected her to dislike that but I don't think we expected her to get as much a charge of it as she did!"

The directors admitted they were "very scared" to spend time with Ginsburg, mostly because there's "something very regal about her."

Ginsburg became a pop culture phenomenon outside of the courtroom. The directors said they believed she learned to "embrace" it.

"She understands that it's an opportunity to educate young people about more serious issues, but I think she also appreciates that whole idea of in a society where we're usually making celebrities out of people who are not old enough to have any clue what's going on, the idea of an 85-year-old rock star is, yes, it's funny. But also there's something kind of beautiful about it."