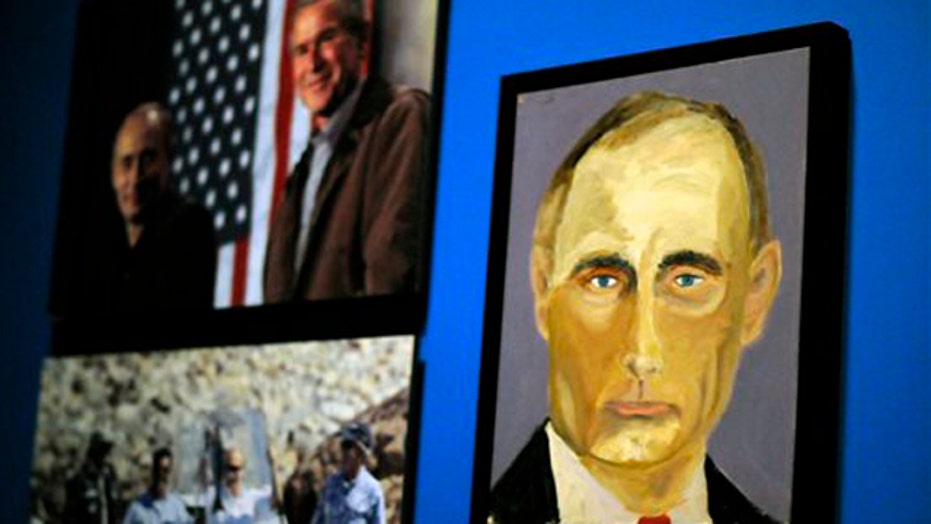 George W. Bush opens up about relationship with Putin

"There's a Rembrandt trapped in this body. Your job is to unleash him."

That's what former President George W. Bush said he told his painting instructor when he decided to give his new hobby a whirl.

Bush was interviewed by his daughter, Jenna Bush Hager, on the "Today" show Friday morning about his first art exhibit.

His portraits of 24 world leaders include Tony Blair, Vladimir Putin and the Dalai Lama.

Bush had an interesting anecdote about what went into his Putin portrayal.

“As you know, our dear dog Barney, who had a special place in my heart, Putin dissed him and said, ‘You call it a dog?’" Bush said. “A year later, your mom and I go to visit and Vladimir says, ‘Would you like to meet my dog?’ Out bounds this huge hound, obviously much bigger than a Scottish terrier, and Putin looks at me and says, ‘Bigger, stronger and faster than Barney.'

“I just took it in. I didn’t react," Bush said. "I just said, 'Wow. Anybody who thinks 'my dog is bigger than your dog' is an interesting character.'”

The exhibit, titled "The Art of Leadership: A President's Personal Diplomacy," goes on display Saturday at the George W. Bush Presidential Library and Museum in Dallas.

Bush, who left office in 2009, has taken up oil painting in recent years. He said he hoped the subjects of his paintings like what they see.

"I hope they take it in the spirit in which these were painted in," Bush said. "That was the spirit of friendship. And you know, I admire them as leaders and was willing to give it a shot in terms of getting people to see how I felt about them."

-- The AP contributed to this report.