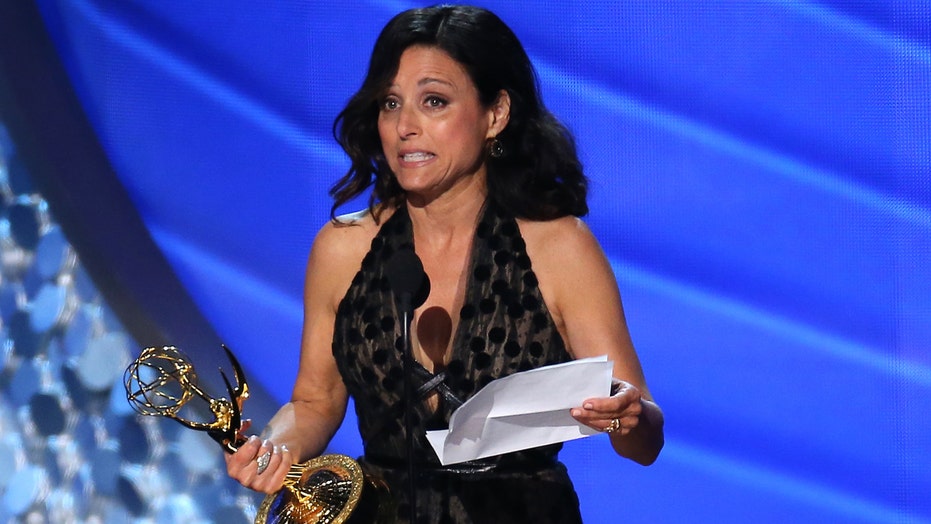 Emmys 2016: The good, the bad and the political

Four4Four: The 2016 Emmys were all about bashing Donald Trump. Did Hollywood go too far?

After trying to hitch a ride to the Emmys with James Corden and the cast of "Modern Family” in the show's opening skit, host Jimmy Kimmel wound up in a limo driven by former GOP presidential candidate Jeb Bush.

“Did you know you can make $12/hour driving for Uber?” Bush, wearing a chauffer's cap, asked Kimmel.

Upon learning Kimmel was nominated for an Emmy, Bush the Uber driver gave him some advice.

“If you run a positive campaign, the voters will ultimately make the right choice,” Bush deadpanned before adding, “Jimmy, that was a joke, and shave that wig off your face, you godless Hollywood hippie.”

It was the first of many political jokes and statements of the night, as the presidential election draws near. Kimmel and many of the night's winners set their sights on GOP candidate Donald Trump, while a few gave shout outs to Democratic nominee Hillary Clinton.

“Many have asked who’s to blame for Donald Trump and I’ll tell you who, he's sitting right there, that guy – Mark Burnett,” Kimmel said. “Thanks to Mark Burnett we don’t have to watch reality shows anymore , we’re living in one.”

“Who do you have lined up to fill in the spot on the Supreme Court,” Kimmel cracked. “Miley Cyrus or CLo?"

When Mark Burnett accepted an Emmy for his reality show "The Voice," he got back at Kimmel by inviting viewers to watch the show this week to see vocal judges Miley Cyrus and Alicia Keyes: "Your next Supereme Court justices."

Later backstage, Burnett joked with reporters that Trump was probably in contact with Kimmel.

“I’m sure Donald was emailing Jimmy Kimmel saying thanks for the free publicity," Burnett laughed.

Julia Louis-Dreyfus won her fifth Emmy Award for best comedy actress for her role in "Veep." In accepting the award, Louis-Dreyfus said she'd like to apologize for the current state of American politics.

"I'd also like to take this opportunity to personally apologize for the current political climate," she said. "I think that 'Veep' has torn down the wall between comedy and politics. Our show started out as a political satire but it now feels more like a sobering documentary." She promised to "rebuild that wall and make Mexico pay for it."

Aziz Ansari, who won an Emmy for the Netflix series “Master of None,” mocked Trump’s proposed Muslim immigrant ban.

“After careful consideration, I’ve decided I’m going with Trump — which is also why I’m recommending we get rid of all Muslim and Hispanic nominees from the ceremony immediately,” he said. “Mom, Dad … you need to be escorted out right now.”

But some others were not in a joking mood. “Transparant” creator Jill Soloway, speaking to reporters backstage after winning her Emmy, compared Trump to Hitler calling the canddiate “The most dangerous monster to ever approach our lifetime. He’s a complete dangerous monster and at any moment that I have to call him out for being an inheritor of Hitler, I will.”

Courtney B. Vance won for best actor in a limited series for the show "The People v. O.J. Simpson: American Crime Story." Vance won for his portrayal of late defense attorney Johnny Cochran, and the series won three acting awards on Sunday, including Emmys for Sterling K. Brown and Sarah Paulson for their portrayals of prosecutors Christopher Darden and Marcia Clark.

Both Vance and Brown gave prominent shout-outs to their wives, and Vance ended his acceptance speech with a political message, shouting, "Obama out! Hillary in!"

Kate McKinnon won the Emmy for best supporting actress on a comedy series for her role on "Saturday Night Live," in which she played among others, Hillary Clinton, who she thanked.

Finally, at the end of the show, Kimmel gave one more nod to Nov. 8: “We finished before the election came!”

FOXNews.com's Blanche Johnson and the AP contributed to this report.