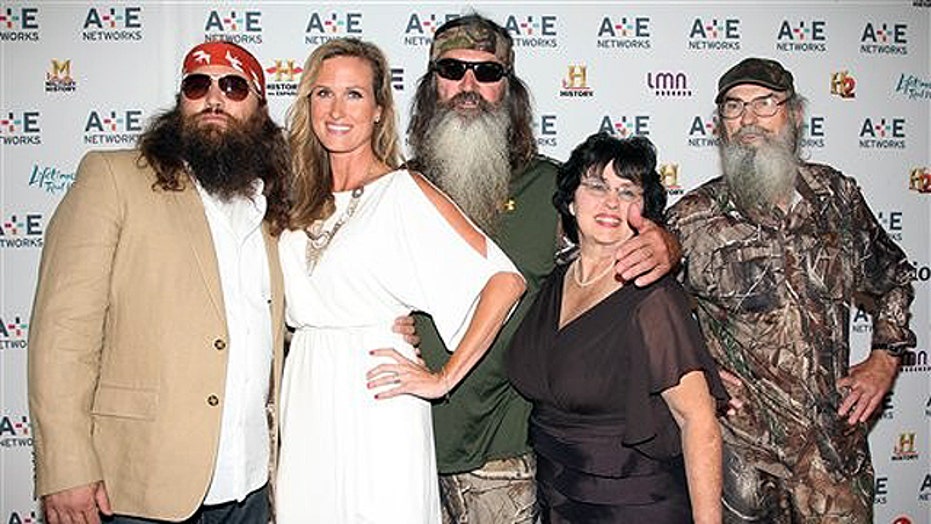 The most popular reality show in cable television history has sparked a heated national debate, laying bare a national rift over gay rights and free speech and prompting politicians, entertainers and ordinary folks to enter the cultural fray.

Louisiana Gov. Bobby Jindal, as well as former GOP presidential candidates Newt Gingrich and Sarah Palin, have all come to the defense of 'Duck Dynasty' star Phil Robertson, whose statements condemning homosexuality angered many and earned him an "indefinite suspension" from the A&E network.With families gathering for the holidays next week, it seems likely 'Duck Dynasty' will dominate many dinner table debates.

What won't be as clear is whether the hit show will go on. A statement from the Robertson family released late Thursday raised doubts about the Louisiana clan's willingness to continue after comments from patriarch Phil Robertson triggered an uproar.

“We have had a successful working relationship with A&E but, as a family, we cannot imagine the show going forward without our patriarch at the helm,” the Robertson family said in a prepared statement. “We are in discussions with A&E to see what that means for the future of Duck Dynasty.”

The family said it has “spent much time in prayer” since learning A&E had suspended Phil Robertson, the patriarch of the Louisiana family, over comments he made about homosexuality.

Robertson sparked a national debate on religion and tolerance in an interview with GQ magazine. The writer asked him what he considered to be sinful behavior.

Then he paraphrased Paul’s letter to the Corinthians: “Don’t be deceived. Neither the adulterers, the idolaters, the male prostitutes, the homosexual offenders, the greedy, the drunkards, the slanderers, the swindlers -- they won’t inherit the kingdom of God. Don’t deceive yourself. It’s not right.”

The family defended Robertson’s comments and stressed that they are a “family rooted in our faith in God and our belief that the Bible is His word.”

“While some of Phil’s unfiltered comments to the reporter were coarse, his beliefs are grounded in the teachings of the Bible,” the family said. “Phil is a Godly man who follows what the Bible says are the greatest commandments: ‘Love the Lord your God with all your heart’ and ‘Love your neighbor as yourself.’ Phil would never incite or encourage hate.”

The family also criticized A&E for its actions, saying he was placed on hiatus “for expressing his faith, which is his constitutionally protected right.”

Robertson’s comments drew immediate condemnation from gay rights groups who pressured the network to take action. On Wednesday, A&E announced Robertson was being removed from the show indefinitely.

"We are extremely disappointed to have read Phil Robertson's comments in GQ, which are based on his own personal beliefs and are not reflected in the series Duck Dynasty," the network said in a statement.

"His personal views in no way reflect those of A&E Networks, who have always been strong supporters and champions of the LGBT community. The network has placed Phil under hiatus from filming indefinitely."

A&E’s decision to pull Robertson from the show drew strong support from the gay and lesbian rights group GLAAD.

“What’s clear is that such hateful anti-gay comments are unacceptable to fans, viewers, and networks alike,” said GLAAD rep Wilson Cruz. “By taking quick action and removing Robertson from future filming, A&E has sent a strong message that discrimination is neither a Christian nor an American value.”

Duck Dynasty drew 11.8 million viewers in August for the debut of its fourth season - setting a record for a cable nonfiction series. Hundreds of thousands of outraged fans responded to the news of Robertson’s suspension by launching boycotts and petitions They accused the network of discriminating against Robertson because of his religious beliefs and violating his First Amendment rights.

“Free speech is an endangered species,” wrote former Alaska Gov. Sarah Palin on her Facebook page. “Those ‘intolerants’ hatin’ and taking on the Duck Dynasty patriarch for voicing his personal opinion are taking on all of us.”

“The politically correct crowd is tolerant of all viewpoints, except those they disagree with,” he said. “It is a messed up situation when Miley Cyrus gets a laugh, and Phil Robertson gets suspended."

“The reality is that the Robertson family are Bible-believing Christians who don’t cherry pick what the Bible teaches,” he said.

Perkins said the Duck Dynasty patriarch was targeted “simply because he expressed his religious beliefs but there is a clear double standard that is being applied.”

“It is time for all Americans to take a stand against the cultural elites who want to destroy the livelihood of people and remove God and His truth from every aspect of public life,” he said.

The Liberty Institute, a legal firm specializing in religious liberty cases, condemned A&E’s actions and urged them to reconsider.

“In the spirit of American tolerance of religious diversity, A&E should reinstate Mr. Robertson and apologize for its religious bigotry,” the statement read.