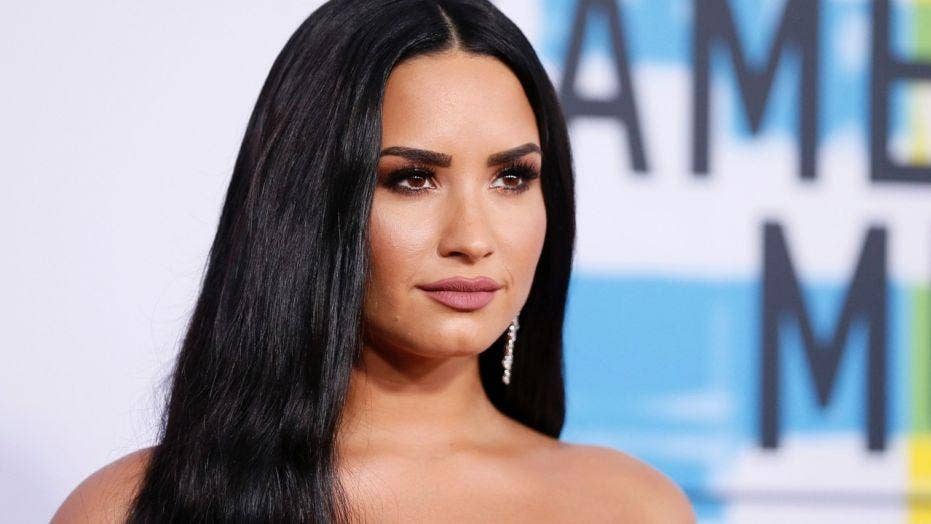 Demi Lovato has never shied away from sharing her personal struggles with mental health and addiction.

The 25-year-old pop star has told tales of her battles with mental health, drugs and alcohol during concerts, award shows and social media — even filming a YouTube documentary about her road to sobriety.

Lovato says her relationship with drugs started in her teen years as her popularity started to rise as a Disney star.

“I felt out of control the first time I did it. My dad was an addict and an alcoholic. Guess I always searched for what he found in drugs and alcohol because it fulfilled him and he chose that over a family,” Lovato revealed in "Simply Complicated," which was released in October 2017.

In 2011, at the age of 18, Lovato was referred to a treatment program for the first time in West Hollywood, where she was treated for depression, bulimia and drug and alcohol abuse.

“I just came to a breaking point; the next 12 months were extremely difficult," the star described in her documentary.

On July 24, Lovato was reportedly hospitalized for an apparent overdose. She was revived at her home with the opioid treatment drug Narcan, according to multiple reports.

A month prior, Lovato, who has grappled with substance abuse in the past, revealed in a new emotional single that she had relapsed months after celebrating six years of sobriety.

Here's a look at some of Lovato's most powerful mental health and addiction advocacy moments as the singer continues to share her struggles with the world.

She reveals she's relapsed in her new song "Sober"

In her new song “Sober,” released in late June, Lovato sings she’s not sober anymore and apologizes to the “ones who never left” her side and the fans following her journey.

In the song, Lovato promises to get help and says it wasn’t her intention to relapse.

She gives an emotional speech, marking 6 years of sobriety

Lovato went on stage for her “Tell Me You Love Me” tour and gave a heartfelt speech to celebrate her 6-year anniversary of being sober on March 15, Billboard reported.

“Six years ago, I was drinking vodka out of a Sprite bottle at 9 in the morning, throwing up in the car," she told the audience. "And I just remember thinking, 'This is no longer cute. This is no longer fun. And I'm just like my dad.' So I took a look at my life and I said, 'Something has to change, I've got to get sober' -- so I did."

Fans sang "Happy Birthday" to Lovato to celebrate the occassion.

Lovato announced her new role as a mental health ambassador for Global Citizen, a movement with a goal of ending poverty by 2030. The singer said she'd be specifically focusing on displaced children in Iraq, providing them with resources to help them cope.

"My hope is that this program can bring a bit of comfort to those who need it most," Lovato wrote in a statement online. "This isn't about politics or race or religion. It's about simple humanity and protecting one another."

In September 2016, Lovato revealed she became part owner of CAST Centers, the same addiction treatment facility she was treated in back in 2011.

“It sounds ridiculous but, like, I kind of made a pact with God,” Lovato said in an interview with CBS Sunday Morning. “And I don’t even think you’re supposed to do that, but I was, like, I promised, ‘If you make me a singer one day, I’m going to use my voice for so much more than singing, and I’m going to help people with it.’”

Lovato credited the treatment center with saving her life.

“I’m now sitting here right now alive and more successful than I’ve ever been," she commented in 2016.

She gives an emotional speech at the Democratic National Convention

Lovato, a Hillary Clinton supporter, took the stage on opening night during the 2016 Democratic National Convention to discuss mental illness — and the vital role politicians play in assisting those who are suffering across the country.

“Like millions of Americans, I am living with mental illness. But I’m lucky. I had the resources and support to get treatment at a top facility,” Lovato said. “Unfortunately, too many Americans from all walks of life don’t get help, either because they fear the stigma or because they can’t afford treatment.”

The star urged Congress to work together to "provide better access to healthcare and support for everyone," while endorsing Clinton for president.

She reveals she's 'living with bipolar disorder' in a PSA

Lovato admitted she was diagnosed with bipolar disorder in an August 2014 PSA for the Jed Foundation's Mental Health Listening & Engagement Tour.

“I’ve seen some dark times, especially with the depressive phase of the illness,” Lovato said in the video, adding that she hopes her story inspires others suffering with similar mental health issues. “Bipolar depression really got my life off track. But today I’m proud to say I’m living proof that someone can live, love and be well with bipolar disorder when they get the education, support and treatment that they need.”

She speaks at the National Alliance on Mental Illness’ conference

Lovato urged Congress to pass mental health reform during a passionate speech at the National Alliance on Mental Illness conference in Washington, D.C.

“Those of us here today know that mental illness has no prejudice. It affects people of every race, age, gender, religion and economic status. It doesn’t discriminate between Republicans or Democrats either,” said Lovato, then 22, according to The Hill.

"Today our message is very clear: it’s time for Congress to act for mental health by supporting the passage of a comprehensive mental health bill this year," she added.

She creates 'The Lovato Treatment Scholarship' in her dad's honor

Lovato teamed up with Cast Recovery in July 2013 to create “The Lovato Treatment Scholarship,” which provides scholarships for those with mental health issues to seek treatment.

“Treatment is actually very, very expensive. And whether it's rehab or in-patient, out-patient—whatever it is—I wanna be there providing that service because I didn't get the chance to do it with my dad and I wanna make it up to him now that he's looking over me," the singer told E News.