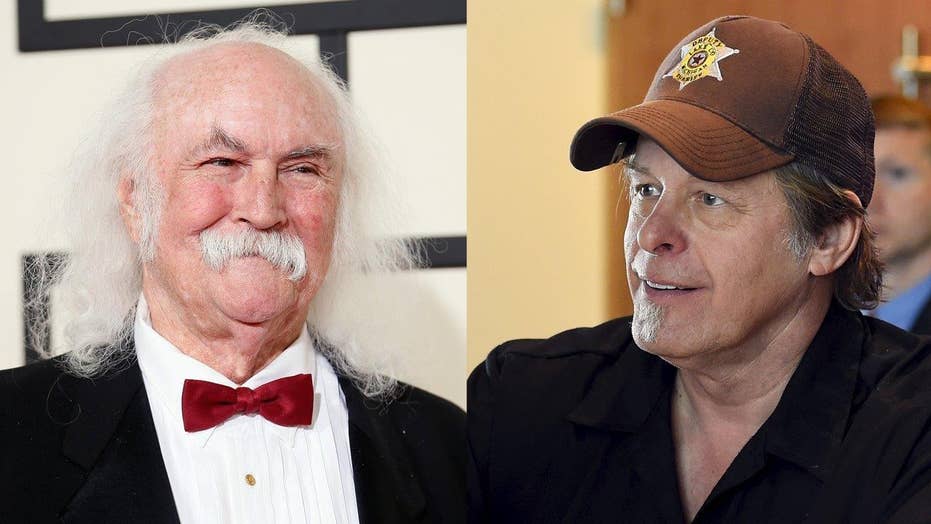 Fox411: David Crosby and Ted Nugent fire jabs back and forth

David Crosby and Ted Nugent are at odds.

The musicians have been taking jabs at each other on social media and in interviews in recent days.

It all began when Crosby slammed a photo of Nugent at the White House with President Donald Trump, writing on Twitter on Thursday that the image featured a “pair of “a--holes.”

“David Crosby, he’s kind of a lost soul, and he’s done so much substance abuse throughout his life that his logic meter is gone,” Nugent said during the chat. “His reasoning and his depth of understanding is pretty much gone, so it doesn’t surprise me, I feel quite sad for the guy.”

In this Feb. 6, 2015 file photo, David Crosby arrives at the 2015 MusiCares Person of the Year event at the Los Angeles Convention Center in Los Angeles. (AP)

Crosby then took to Twitter to respond. He wrote, “Nugent is a brainless twit ....I can out think him without even trying hard.”

It’s no huge surprise that Crosby – a liberal star who has spoken out against Trump – and Nugent, who is known for his conservative views, aren’t the best of friends. They are both politically active and stand firmly on opposite sides.

In an interview posted on his website, Crosby said that Trump scared him. He said Trump “can't control his mouth or his mind. He's an idiot, and a scary one.”