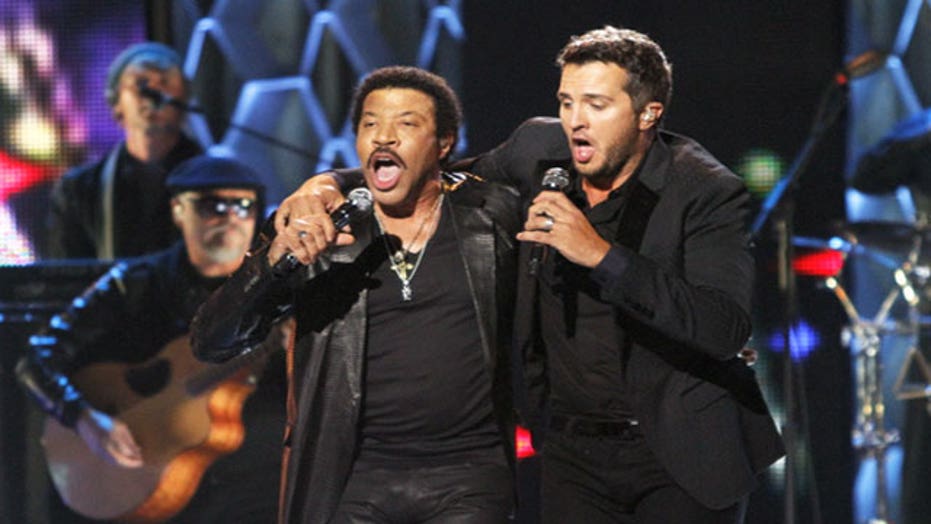 CMT honored the men of country music this year

CMT's celebration of country music's top artists of 2013 was a complete dude fest.

Whether it was saluting Tim McGraw as a more-relevant-than-ever trailblazer, acknowledging the genre's love-hate relationship with Florida Georgia Line, the precociousness of Hunter Hayes or the current dominance of good buddies Jason Aldean and Luke Bryan, Tuesday night's live broadcast of "CMT Artists of the Year" had plenty of bro hugs to go around.

"It's really cool to be part of this fraternity and what's going on in Nashville right now, and country music is one of the coolest things in the world," Aldean said as he accepted his fourth artist of the year award — one for each edition of the fourth annual show. "I'm glad to be a part of it. I'm glad people like what I do."

Fraternity was the right word for the night — and the year — in country music.

McGraw made something of a comeback this year, releasing his first post-Curb Records album and reclaiming his place as one of country's most bankable stars under a new record deal with Big Machine Records. McGraw acknowledged his fellow honorees while accepting his new trophy.

"The new artists that are coming along are making great music," McGraw said. "The other ... five artists ... that I'm here with tonight, that's what keeps me going and that's what inspires me to make music. They teach me something every time I see them on tour ... or every time I spend a few minutes sitting and talking with somebody. Every time I hear one of their records, it inspires me to go back in the studio and make better records and get better at what I do and get better at my craft."

Florida Georgia Line member Brian Kelley returned the hosannas: "Thank you for making amazing music. You're the reason so many people move to Nashville, Tenn., to make country music."

The duo's "Cruise," featuring Nelly, was the year's biggest country music song, and served as something of a dividing line for the genre's fans. Alabama noted the debate while introducing FGL.

"They remind us of us," singer Randy Owen said. "Everybody hated our ass."

Bryan was the night's final honoree, a tip of the cap to the year he's had. Bryan has the top-selling country album released in 2013, was the Academy of Country Music's top honoree and shook his rear to the top of the genre.

"I never expected my butt to get so much attention," Bryan joked.