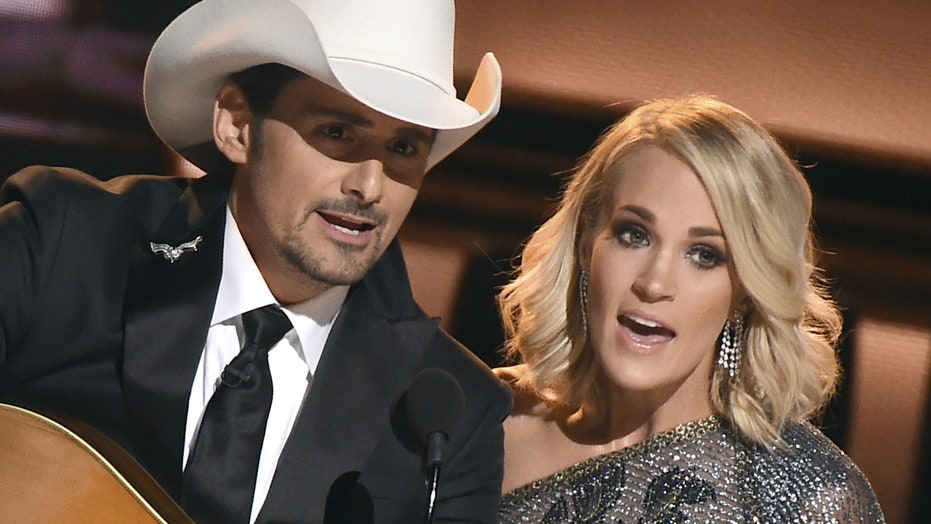 The Country Music Association Awards focused on something a lot of fans have complained over the years has been lacking: traditional county music.

Country superstar Garth Brooks walked away with the night's biggest award of entertainer of the year. The singer was among many contemporary and classic artists to perform mashups of country music's most influential tunes.

Paisley and Underwood, who returned as hosts for the ninth time, told jokes about politics, Wikileaks, Brangelina's breakup and more at the Bridgestone Arena in Nashville, Tenn.

"We're so sick of politics, we don't even care who wins," they sang in harmony. At one point, Paisley called Underwood a "nasty woman," mocking Donald Trump.

In another bit, Paisley and Underwood delved into their "gift basket of deplorables" and pulled out items such as "Willie Nelson's Potted Meats" and "Girl Crush" soda.

Underwood then began announcing the singers who were up for the entertainer of the year award while Paisley interrupted her by saying things like "Wrong," "Lies" and calling her "Crooked Carrie" adding the show is "rigged."

Brooks, who lost entertainer of the year at last year's Country Music Association Awards when he returned to music after a 13-year break, won the top prize at the show.

"We are so damn lucky to part of this thing called country music," Brooks yelled loudly while accepting the night's top honor.

Dolly Parton, who earned the Willie Nelson Lifetime Achievement Award, was honored by Reba, Underwood, Martina McBride, Jennifer Nettles and Kacey Musgraves, who all sang a rousing rendition of "I Will Always Love You."

"I would have cried, but I didn't want to mess up my eyelashes," said Parton, sporting a bright yellow dress.

Chris Stapleton, who won big at last year's show, was the night's top winner with two: He took home male vocalist and music video of the year.

"What a wonderful night ... I've cried just watching everybody," said Stapleton, who walked into the show as the top nominee along with Eric Church and newcomer Maren Morris.

"Glory to God, thank you Jesus," said a teary Underwood, who also thanked her husband and son.

Church won album of the year for "Mr. Misunderstood" and Morris picked up new artist of the year.

"Last year, I sat across the street at a bar and watched this show. I never thought as a songwriter I'd be standing here today," she said.

The first award of the night went to Thomas Rhett, who won single of the year for "Die a Happy Man."

"I gotta first thank the Lord ... my lovely wife in the blue dress; she was the full inspiration of this song," said Rhett.

Lori McKenna won song of the year for writing Tim McGraw's "Humble and Kind," a tune she said was based on a prayer she wrote for her five children. McKenna co-wrote Little Big Town's megahit "Girl Crush," earning a Grammy Award this year and last year's song of the year honor at the CMAs.

"I have a job in this town because of this guy's wife, Faith Hill," said McKenna, who was escorted to the stage by McGraw.