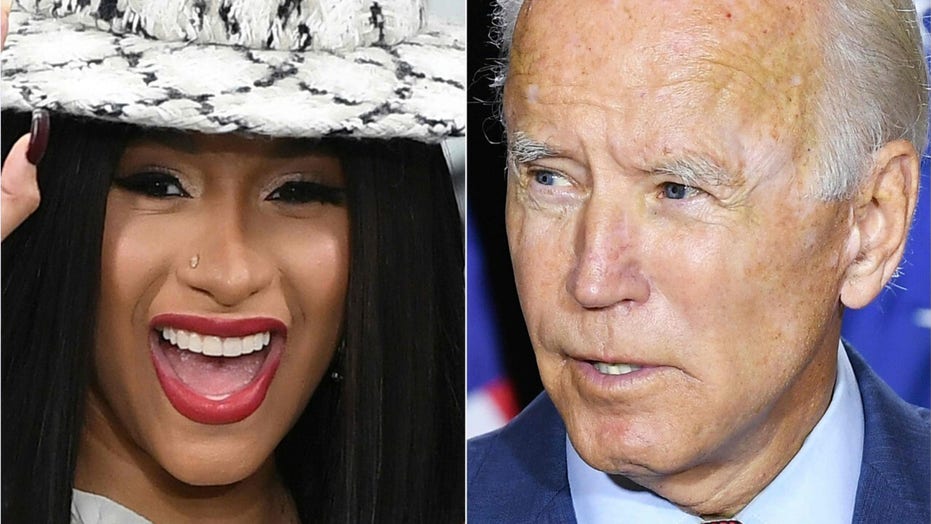 Ahead of DNC Convention, Cardi B interviews Joe Biden about young voters and racism

One of the music industry's biggest stars interviewed presumptive Democratic presidential nominee Joe Biden. Rapper Cardi B spoke to Biden for Elle Magazine and covered a range of topics, from his goals for free education to racial injustice in America.

Cardi B can add journalist to her long list of talents.

The "WAP" singer first tackled her dislike and distrust of President Donald Trump. She called him "confusing" and explained how she constantly feels lied to by the government.

"Tell me the truth, the hard-core truth," she said regarding the status of the coronavirus pandemic in America.

Biden, 77, noted the importance of voting, especially getting young people to do so, so Trump becomes a one-term president.

"In 2016, if 18- to 24-year-olds had voted in the same percentage as the rest of the population, there would have been 5.2 million more votes," Biden contended. "We wouldn’t have [Trump]; we would have had Hillary Clinton. The vote matters. That’s why you keep talking to people about the need to vote. Your generation can own what happens in the next election. They can change things dramatically if they show up and vote."

The Bronx native said her fans are most interested in "free college and Medicare." She asked Biden, "When you see the taxes coming off your check, you don’t understand, because you feel like you’re putting in so many hours. People want to know, can you provide college education, this [health care] plan, without a big chunk of taxes coming out of our checks?"

CARDI B SPEAKS OUT ON MINNESOTA LOOTING AMID GEORGE FLOYD'S DEATH

"Yes, we can," Biden responded. "And the way we can pay for all of this is doing practical things, like making sure that everybody has to pay their fair share. [For example] no corporation should pay less than 15 percent tax.

"If I get elected president, anybody with a family [that makes] less than 125 grand, you’re going to get free education," he said. "And everybody gets free community college."

Cardi also spoke about her fears as a Black woman in America and how she's already thinking about the safety of her 2-year-old daughter.

"Prejudice is dangerous. It could be the start of a civil war. It makes people feel uncomfortable around different people," she said. "Nobody wants to feel targeted. Nobody wants animosity. Everybody just wants the best for themselves, their future, their kids’ future."

The Grammy-winner emphasized how Black people are just "asking for equality," fairness, and justice. "That is all," she said. "I feel like everything people are asking for is getting interpreted in a very different way. No, it’s simple: We just want justice. We want to feel like Americans."

Biden said he's sure the change in the world will come from her generation.

"You’re the smartest, the best educated, the least prejudiced, and the most engaged generation in history. And you’re going to change things," he said.

The former vice president then turned his comments to Trump.

"He’s promoting hatred, prejudice, racism. Talking about protecting the Confederate flag when Mississippi takes it off their flag. This is all about the game of making people hate each other. Because that’s how he wins, by dividing us," he said.

Cardi then questioned if he'll be able to deliver on these campaign agendas to which Biden promised, "Absolutely, positively."