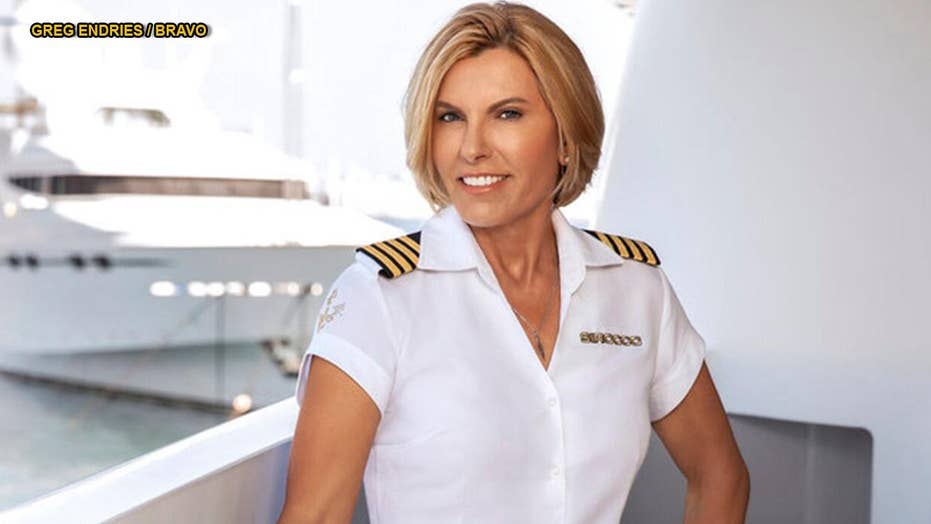 Bravo star Captain Sandy Yawn talks about her relationship with gospel singer Leah Shafer and Season 4 of 'Below Deck Mediterranean.'

Speaking to Fox News, the "Below Deck Mediterranean" boss opened up about the pair's instant connection and how she fell head over heels for Shafer.

The couple met over Facebook in October after Shafer sent the reality star a message, and one line in particular – "many blessings"– really grabbed Yawn's attention. From there, the sparks flew.

"It was like a magical moment," gushed Yawn, noting that she was initially drawn to Shafer's "spirit."

"She's aesthetically beautiful but as many people know you can have very handsome [men] and beautiful women but they may be not so beautiful on the inside, and it was that part of her," she added. "Her soul. Her spirit. Her gentleness. Her kindness. She's the first person I ever met in my life who does not swear. Not one swear word.

"So let's just say I'm trying to clean up my mouth," Yawn teased.

Last June, the yacht captain admitted to The Daily Dish that because of her career "it's hard to have a relationship." Fast-forward to today, now that she's found someone, Yawn is even more grateful.

"I feel like through life you meet people, you have relationships, but then you just say: 'Ok. I don't want to like meet, go out, you know have a relationship for three years and break up.' I want someone with me for the rest of my life.

"I mean I'm 54," Yawn continued. "I've lived a long life that's really great. I'm still very young in my spirit. And you know Leah has come into my life. It was a magical connection. It wasn't something that was pursued and I feel so lucky and that's my goal for the rest of my life — is her."

As for if there are wedding bells in the near future? "[We're] just enjoying [it] right now — in a committed relationship," Yawn explained. "So that part may come later.

"For now, it's just really getting to know each other and spending time [together]," Yawn, who has since relocated from Los Angeles to Denver to be closer to Shafer, shared.

Of the couple's romance, the Bravo personality added: "I love the balance that we have. It's not one person takes care of the other. It's such a great balance and we fit. It fits."

Before Yawn, Shafer was married to Ross Shafer – with whom she shares a 13-year-old daughter Lauren – for 13 years, according to Page Six.

"I just hope that everyone's good to her," Yawn told Fox News, adding that it's a "big change" for Shafer.

In May, The Cheat Sheet reported that since the couple has gone public with their relationship, “some religious institutions have turned their back" on Shafer. In response to the backlash, Shafer explained to the outlet at the time: “I think you can’t help who you fall in love with.”

Yawn has also been there for her new love, giving Shafer unwavering support and advice.

"In the very beginning I was on television, Bravo was really great at the social media part saying: 'Listen, do not respond to the negative. Just stay focused on what your true goal is, the show, and just focus on the positive.' And for her, this has never happened," Yawn noted.

"It's brutal," she continued. "They are tearing her apart – the gospel world – some of them, but she's also getting a lot of love. So I said Bravo taught us to: 'Block. Buh-bye.' And you just shake those people off and you focus on the people who are positive, but somehow the human mind always goes to the negative and it's so hard. At some point, you just block those people."

Yawn's relationship isn't the only new part of her life though. The yacht captain is also currently starring on Season 4 of "Below Deck Mediterranean."

"It's an incredible feeling and I'm grateful and gracious to Bravo," Yawn said of the show being picked up again. "Also, it allows many Americans and [people from] other countries to see that this is an amazing time that we have doing a job and there's actually jobs in this industry and also look at the beautiful places we go."

She continued: "And I think it also encourages people to go travel and [shows that] chartering is for everyone. There are different sized vessels. Not every boat has to be this massive yacht but there are smaller yachts you can charter. So it's a great thing. Bravo has done a great thing for the maritime industry."

Looking back over the last five years since she made her debut on Season 2 in 2014, Yawn admits that this is the first time she's "really stayed focused on being a yacht captain" instead of "thinking about the cameras."

"[It] is so hard to do," she added. "And it really helps when you're not challenged and I think my relationship with [chief stew] Hannah [Ferrier] was a lot better [this season], so I wasn't so focused on that per se, but I actually was able to do my job."

"Below Deck Mediterranean" airs Mondays at 9 p.m. ET on Bravo.