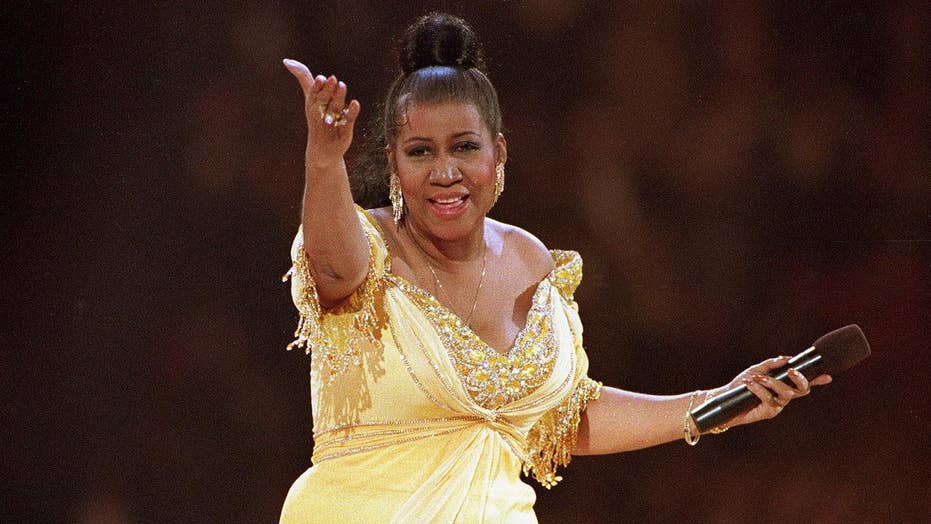 music career spanned six-plus decades. The Queen of Soul died of cancer earlier this month at the age of 76.

A day for singing the praises of one of America’s greatest artists at times seemed equally a day for bashing the president of the United States.

At a funeral service in Detroit on Friday for Aretha Franklin – who died of pancreatic cancer Aug. 16 at age 76, several speakers used the occasion not only to hail the Queen of Soul but to dump on President Trump.

"You lugubrious leech, you dopey doppelgänger of deceit and deviance, you lethal liar, you dimwitted dictator, you foolish fascist," Georgetown University sociology professor Michael Eric Dyson said, according to the San Francisco Chronicle. "She ain't work for you."

"You lugubrious leech, you dopey doppelgänger of deceit and deviance, you lethal liar, you dimwitted dictator, you foolish fascist."

Dyson was referring to a comment Trump made during a recent Cabinet meeting, recalling Franklin’s performances at a Trump casino in New Jersey soon after it opened.

The Rev. Al Sharpton also seized an opportunity to criticize the president.

“You know, the other Sunday on my show, I misspelled 'Respect,' and a lot of y'all corrected me," Sharpton said, according to the Washington Examiner. “Now, I want y’all to help me correct President Trump to teach him what it means.

"And I say that because when word went out that Ms. Franklin passed, Trump said, 'She used to work for me,’” Sharpton continued. “No, she used to perform for you. She worked for us. Aretha never took orders from nobody but God."

The Rev. Jesse Jackson, who ran for president as a Democrat in 1984 and 1988, issued a call for voter registration.

“Aretha was on the battleground for 60 years," Jackson told the audience. "We have long lines to celebrate death, and short lines for voting. Something is missing. If you leave here today and don't register to vote, you're dishonoring Aretha.”

“We have long lines to celebrate death, and short lines for voting. Something is missing. If you leave here today and don't register to vote, you're dishonoring Aretha.”

President Trump did not attend Franklin’s funeral, but on Aug. 16, soon after news broke that she had died, he posted a Twitter message.

“The Queen of Soul, Aretha Franklin, is dead,” Trump wrote. “She was a great woman, with a wonderful gift from God, her voice. She will be missed!”