A motorcyclist in Bhubaneswar, India experienced a head-on collision with a charging bull. The accident, caught on security camera, occurred as the rider made a left turn around a tree as two bulls came running along at full speed. One bull leaped directly into the man, who was thrown to the ground and knocked unconscious. The man was brought to a hospital where he awoke after a week and is expected to make a full recovery.

And you thought traffic was dangerous.

A security camera captured the moment that a rider in Bhubaneswar, India, was struck by a charging bull.

In the video, the man is seen making a left turn around a tree as two of the animals come running along at full steam and one leaps directly into him. The man is thrown to the ground and appears to be lifeless, but was only knocked out by the impact.

Residents of a nearby home then come to his aid and the man was brought to a hospital, where he laid unconscious for a week. He has since awoken and is expected to recover, SWNS reports.

There are an estimated 5 million stray cattle in India that are not only hazardous to motorists, but also cause farmers major issues by eating their crops unchecked, according to a recent Voice of America report.

SCOOTER RIDER SURVIVES BEING T-BONED BY MOTORCYCLE IN SHOCKING VIDEO: 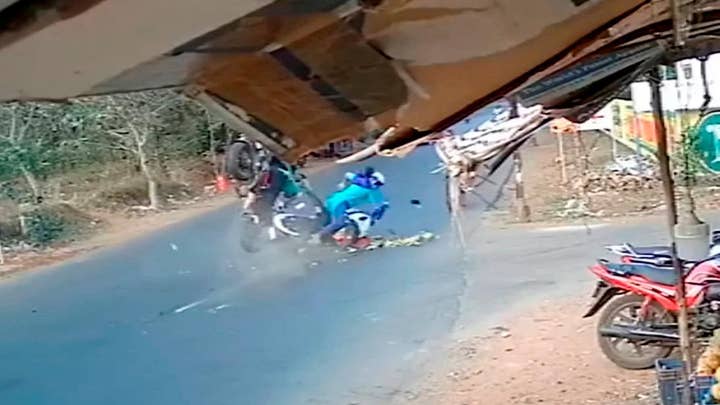