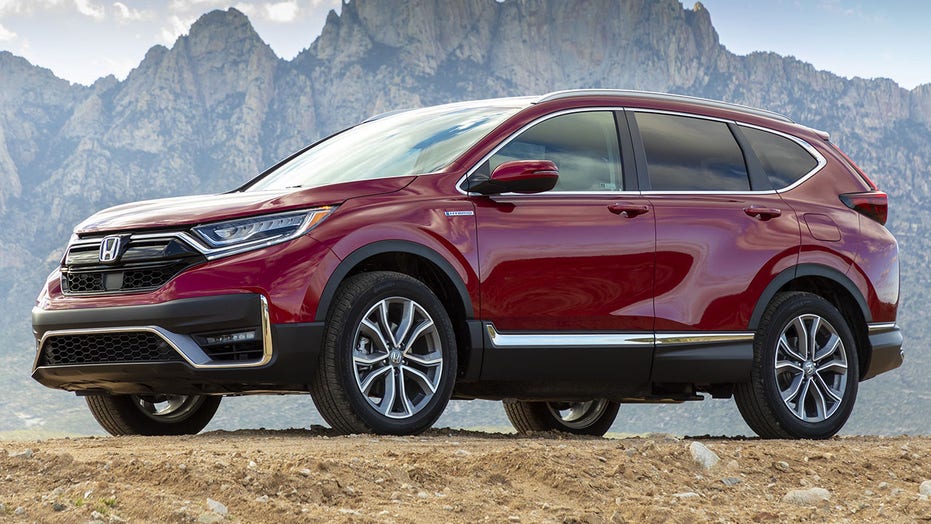 Honda was named the most fuel-efficient full-line automaker in America by the EPA in 2019, with an overall fleet rating of 30 mpg, and it got there by batting for average.

It doesn’t make any gas guzzlers, but it’s also never had a home run on the hybrid or electric sales charts. Now it has one that could go long ... between fill-ups.

The 2020 CR-V Hybrid is Honda’s first hybrid utility vehicle and was designed to take on the best-selling Toyota Rav4 Hybrid. Like the Rav4, it’s a low-key green machine. Aside from a couple of hybrid badges, it looks pretty much the same as the conventional models, all of which received a blink-and-you’ll-miss-it makeover for 2020.

The Toyota and Honda both come standard with all-wheel-drive, but their drivetrains are very different. Toyota’s features a hybrid unit with a four-cylinder engine and two electric motors driving the front wheels and a standalone electric motor at the rear axle, with no driveshaft connecting the two ends. The CR-V is essentially an electric car that uses its 2.0-liter four-cylinder primarily as a generator, although it can couple with the electric motor to help drive the wheels at certain speeds above 45 mph.

At 219 hp for the Rav4 and 212 hp for the CR-V, each represents the most powerful models in their lineups. Nevertheless, their EPA combined fuel economy ratings are 40 mpg and 38 mpg, respectively, but it’s pretty much a wash in the real world. I achieved 39-40 mpg with both of them in normal use.

The Rav4 Hybrid’s mix of practicality, efficiency and performance led me to proclaim it as the best newly-introduced vehicle I drove last year, and the CR-V Hybrid has quickly become a front-runner for the 2020 title. The cabin feels roomier than the Rav4's and adds a layer of sheen that gives it a more premium feel.

Four trim levels are available ranging from $28,870 for an EX to $37,070 for top of the line Touring. Along with a small price premium, the only real trade-off compared to the conventional CR-V is that the battery pack’s location under the cargo bay floor means there’s no spare tire or extra storage there.

Honda’s been using this drivetrain configuration in its hybrids for a while, but this application is by far the best. The power is immediate and, most of the time, the four-cylinder barely makes a sound when it is in use. Only when you floor the accelerator does it rev hard and stay there the way a powerboat engine does as the vehicle picks up speed, but even then it’s not unpleasant. When it’s operating in electric mode under 17 mph, the vehicle emits a hum to warn pedestrians that sounds very sci-fi, even from the driver’s seat. And that’s not a bad place to be.

Weighing just 200 pounds more than the gas-only CR-V, it retains all of the excellent driving dynamics the model is known for: its engaging handling coupled with a magic carpet ride. Switching from Eco to Normal to Sport mode makes significant changes to its responsiveness, with the last of those adding a significant kick.

Like most electrified cars, the CR-V lets you crank up the effect of its regenerative brakes to slow the vehicle without using the brakes as it captures energy to recharge the battery. Unfortunately, this effect needs to be activated by a paddle on the steering wheel and it resets as soon as you speed up again. A permanent solution would make one-pedal driving much easier.

The hybrid gets the rest of the CR-Vs tech offerings, which include improved lane-keeping assist and radar cruise control systems, a wireless smartphone charging pad and an updated touchscreen infotainment system with a physical volume knob that’s better to use than the virtual slider on the old version. As far as old-school tech is concerned, it’s hard to beat the ease of using a knob while driving.

The Rav4 Hybrid accounted for over a quarter of Rav4 sales last year, and that’s only because Toyota didn’t have enough batteries to build more. It’s a huge success.

The CR-V Hybrid should be, too.