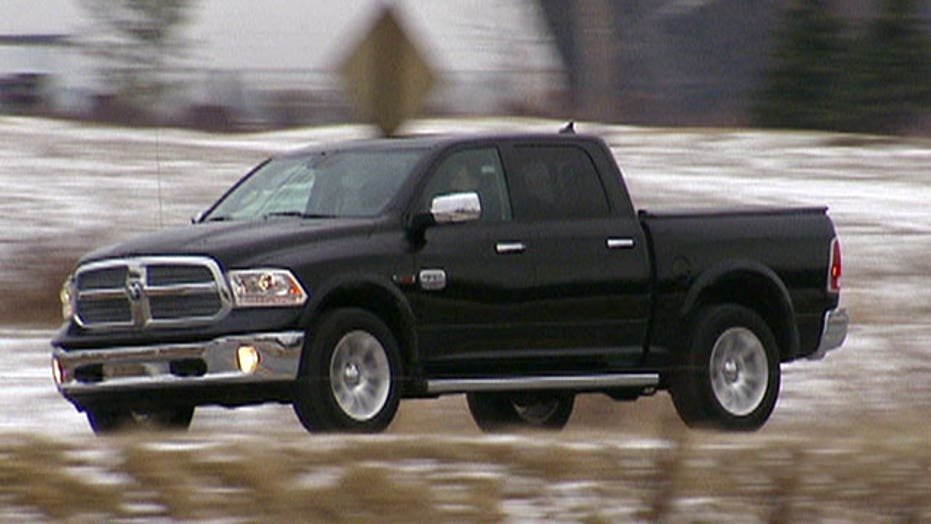 Can Ram's Diesel Go the Distance?

Ford is hoping to revolutionize the full-size pickup segment when its new 2015 F-150 goes on sale late this year.

By replacing nearly all of the steel in its body with aluminum, it expects to cut up to 700 pounds per truck, increasing fuel economy and allowing it to offer smaller, more efficient gasoline engines.

There’s no doubt it’s a game-changing proposition, but by the time it arrives the rules of that game may have already been changed.

Next month, Ram 1500s equipped with diesel engines are scheduled to start rolling into showrooms. They’ll be Chrysler’s first light-duty diesel pickups and the only ones available in the United States.

Dubbed EcoDiesel, the engine is the same 3.0-liter turbocharged V6 that debuted recently in the Jeep Grand Cherokee, and it pumps out 240 hp and 420 lb-ft of torque.

That second figure, oh-so-important to truck buyers, is 10 lb-ft more than the 5.7-liter Hemi V8 also available in the Ram 1500 can muster.

An 8-speed automatic is standard, along with automatic grille shutters that open and close to optimize engine operating temperatures and aerodynamics.

The engine won’t be sold in a standalone model; it will be optional across the lineup in every trim level except Sport. You’ll even be able to get it in an Outdoorsman equipped with the Mossy Oak camouflage package, but good luck sneaking up on any wily game with that loud and proud diesel idle clattering out of the exhaust pipes.

That’s pretty much the only annoying thing these pickups emit, however. Like most diesels today, Ram’s employs an exhaust treatment fluid to meet emissions standards. The tank needs to be filled every 10,000 miles or so, which coincides with the truck’s maintenance schedule.

On the move, things quiet down significantly. The engine transforms into a smooth, hushed highway runner at speed, and is good match for the Ram’s overall refinement, which played a big part in it being named 2013 North American Truck of the Year.

You’d be hard-pressed to find a diesel-powered vehicle of any type that’s as peaceful on the road as this one, and the ride is as car-like as you can get in something this big. Then again, my pre-production test vehicle was a dressed-to-the-nines Laramie Longhorn edition with a $55,735 price tag and optional air suspension, so a little bit of luxury is expected.

The engine’s promise, of course, is V8 capability, including maximum 9,200-pound tow rating, with better than gas V6 fuel economy. A nifty combination, if you can pull it off.

Ram’s 3.6-liter V6 is the reigning half-ton pickup economy champ at 25 mpg highway for two-wheel-drive models and 23 mpg for 4x4s; V8s are rated at 22 mpg and 21 mpg, respectively.

As for the diesel, the official EPA number isn’t in yet, but Ram promises it’ll be “at least” 27 mpg.

Buyers may be in for a pleasant surprise.

I consistently got 28 mpg on the interstates in my 4x4 Crew Cab, and that’s at 65+ mph, not clogging up the right lane at the double-nickel. Overall, I saw a 23 mpg average in the few hundred miles that I covered, with plenty of stop-and-go, city-slicker-style driving in the mix.

Granted, diesel is still much more expensive than regular grade gasoline in most places, but even at 27 mpg an average driver will probably save well over $500 a year at the pump compared to the V8, and have a higher residual value on the back end. Long haulers will do even better, and that’s exactly who this truck fits best.

The folks at Ram estimate about 10-15 percent of customers will go for the EcoDiesel, but the engine has been beating sales projections in the Grand Cherokee and seems even more appropriate tucked behind the 1500’s semi-truck-style grille, so they may be in for a pleasant surprise of their own.