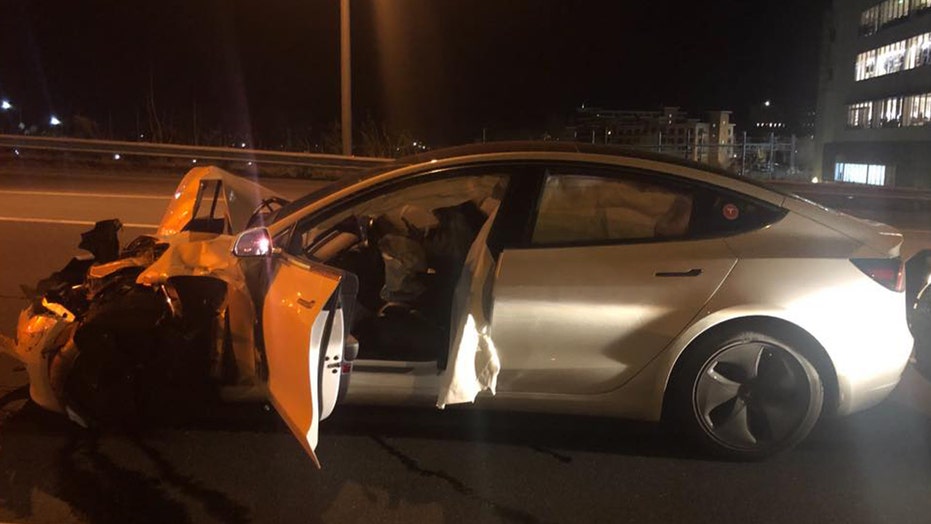 A Tesla on autopilot rear-ended a Connecticut trooper’s vehicle early Saturday as the driver was checking on his dog in the back seat, state police said.

Police said they had responded to a disabled vehicle that was stopped in the middle of Interstate 95. While waiting for a tow, the self-driving Tesla came down the road.

After striking the trooper's vehicle, the driver in the Tesla then rear-ended the disabled vehicle before stopping.

A Tesla owner said he had his vehicle on Autopilot when he crashed into a Connecticut police cruiser so he could check on his dog in the backseat.  (Connecticut State Police )

“The operator of the Tesla continued to slowly travel northbound before being stopped several hundred feet ahead by the second trooper on scene,” police said.

“The operator of the Tesla stated that he had his vehicle on ‘Auto-pilot’ and explained that he was checking on his dog which was in the back seat prior to hitting the collision,” police said.

Tesla owner was cited after his self-driving vehicle crashed into a Connecticut police vehicle while he checked on his dog in the backseat. (Connecticut State Police)

State police said troopers had their emergency lights on at the time of the incident, police said.

The Tesla operator was issued a misdemeanor summons for reckless driving and reckless endangerment, police said.

“Fortunately, no one involved was seriously injured, but it is apparent that this incident could have been more severe,” police said. “Regardless of your vehicle's capabilities, when operating a vehicle your full attention is required at all times to ensure safe driving.”