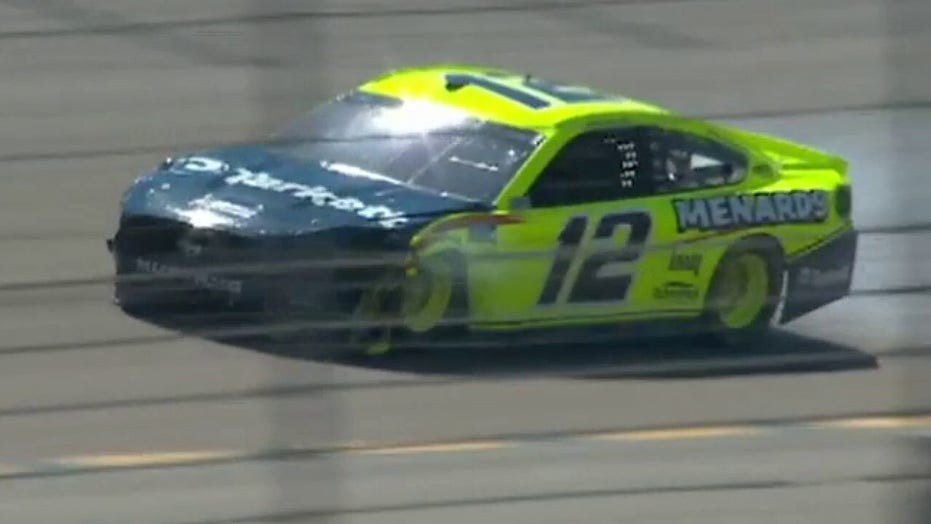 NASCAR drivers on returning to racing amid coronavirus pandemic

The resurrection of Kyle Larson's career began with a 25-hour drive from California to Iowa for a $15,000-to-win World of Outlaws race.

Larson hitched a ride with the team that fielded a car for him Friday night at Knoxville Raceway. It's a total reset for a driver who less than a month ago was the top free agent in NASCAR.

His career came to a sudden halt when he was fired by Chip Ganassi Racing for using a racial slur in an iRacing event late Easter Sunday.

Back to his beginnings — and arguably the type of racing he's always favored — Larson was one of 24 drivers to advance to the main event. He started 18th, one position ahead of brother-in-law and reigning series champion Brad Sweet, and moved to 11th in just five laps.

Larson slipped to 15th on a restart on the sixth lap of the race, and in a 30-lap event he only had enough time to earn a 10th-place finish.

David Gravel, winner of the Knoxville Nationals last year, won the Invitational that was held without spectators on the semi-banked 1/2-mile dirt oval located on the Marion County Fairgrounds in Knoxville. An anonymous donor added $5,000 to the purse during the main event.

Larson drove a car fielded by Sacramento-based Paul Silva. The No. 57 was primarily white but sported sponsorship from Fresno-based labor contractor Tarlton & Son Inc., and Finley Farms, a previous sponsor of Larson's that said it would continue to back him when almost all of his commercial partners ended their relationship.

“We all make mistakes, and deserve a second chance!” Jason Finley wrote on Twitter about Larson.

Also featured on the car was Lucas Oil, which had suspended its relationship with Larson within 24 hours of his iRacing debacle.

Larson, who is half-Japanese and rose through NASCAR's diversity program, was among the most promising talents in the biggest racing series in the country. He was participating in a virtual race for fun after his two kids went to bed when he used a racial slur while addressing his spotter.

The slur was heard on the gaming app Twitch in which players can communicate with one another and fans can follow online. Nearly every sponsor dropped him the next day and Ganassi fired him one day after that. Matt Kenseth has come out of retirement to replace Larson when NASCAR resumes May 17.

Larson quickly retreated to his home state of California, where his family has a strong network of supporters who have aided Larson's career. He's suspended by NASCAR but completed a sensitivity training course that can lead to his reinstatement.

Larson's last Outlaws race was in February, but he started 2020 racing on dirt and won the prestigious Chili Bowl in his 13th attempt. Winning the Chili Bowl was akin to winning the Daytona 500 for Larson, who had raced dirt all through his childhood until he fast-tracked a switch to NASCAR when he was 19.

He ran just one full season in the Xfinity Series in 2013 before he got a shot that same year in four Cup races. He was promoted to a full-time Cup driver the next year at 21-years-old with just over a year of stock car experience.

Larson had been named a future superstar by Hall of Famers Jeff Gordon and Tony Stewart, both who started their careers in sprint car racing like Larson, and the spotlight was immediately bright. He didn't win his first Cup race until 2016 but reeled off four wins the next season.

Larson showed flashes of greatness in his six seasons and four races driving for Chip Ganassi Racing, but ultimately has just six Cup victories to his name. When the season was suspended, Larson had three top-10 finishes in four races and was ranked seventh in the standings.

He was coming off a career-best sixth-place finish in the 2019 Cup final standings and in a free agent season in which Ganassi was likely going to find himself in a bidding war to keep the driver he'd developed. Among the potential suitors was expected to be Stewart, co-owner of Stewart-Haas Racing, who ultimately still might land Larson.

Stewart, who also fields sprint car teams, could ultimately offer Larson a route back to NASCAR — albeit at a far discounted rate that what Larson would have demanded prior to his career imploding late Easter Sunday.

There has been racing by smaller series in various venues across the U.S. over the last two weeks, but World of Outlaws was the first to go with a product it could broadcast across the country.

Less than 400 people were permitted into the venue, where masks and social distancing were required. Drivers did interviews at a stationary microphone and the pay-per-view event was streamed on DIRTVision.com.

“It's a ghost town here, but I'm just happy we are at the race track,” Gravel said after winning his heat. He won the race after a fierce back-and-forth battle with runner-up Ian Madsen.

Drivers were socially distanced and wearing masks prior to the race as they did brief interviews during a qualifying draw. The microphone they spoke into was periodically sprayed with Lysol by the interviewer.

Said driver Daryn Pittman, “I feel like I'm at a spelling bee standing with this microphone in front of me.”

The event also featured the return of Kasey Kahne, who retired from NASCAR at the end of the 2018 season. He was supposed to race 50 sprint car events for his own team last year but was injured in a March 2019 accident and had not raced before Friday night.

Kahne was a fill-in because his usual driver James McFadden could not travel from Australia. Kahne did not make the feature.