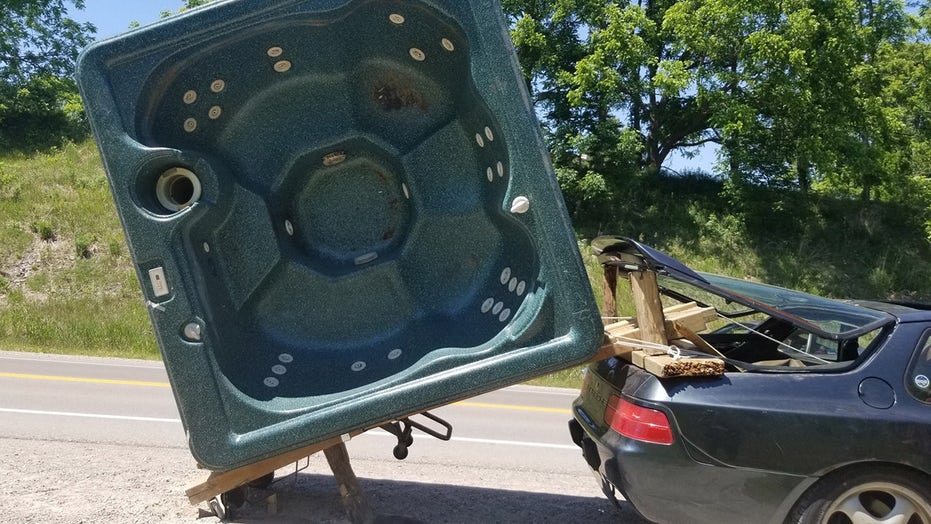 The Force is with this Porsche-designed Star Wars spaceship

The Force is with Porsche. The luxury car company was commissioned by Lucasfilm to design a new Star Wars spaceship.

Maybe it was a time machine.

A driver in Woodstock, Canada, was pulled over this week when police spotted him towing a hot tub behind his classic 1990s Porsche 968 sports car with a handmade rig.

The tub was sitting on its side on top of a dolly attached to beams that were strapped to the inside of its car, which had its hatchback held partially open by a framework of roughly cut wood.

“Had this hot tub became unattached from the homemade trailer that it was being towed on, (it) would have caused serious damage and injury to anyone in its path,” Constable Marco D’Annibale stated in a Facebook post.

The car’s 54-year-old driver was cited with careless driving, according to Global News.

A local hot tub installer provided another photo of the contraption.

While the 968 isn’t your typical tow vehicle, in some countries it was rated to pull a 1,200 kg braked trailer, which is definitely not what was being used in this case.