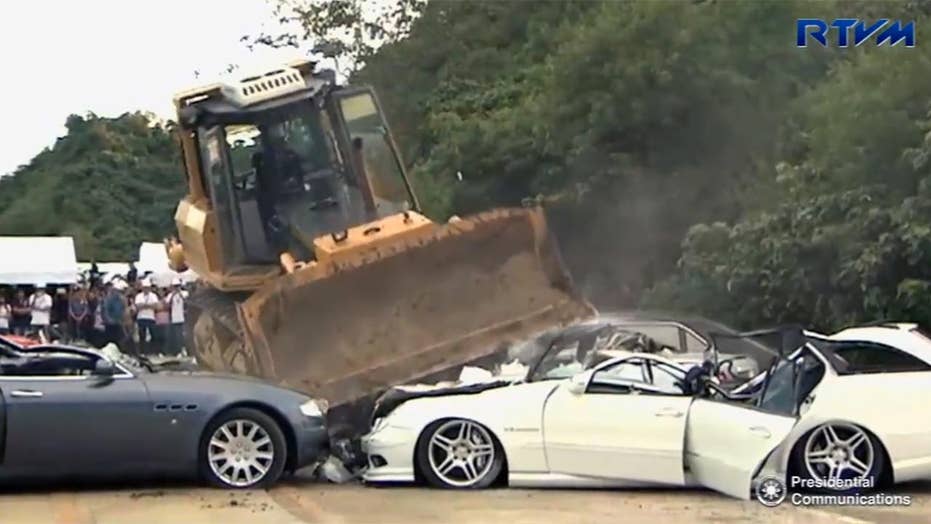 Duterte oversees another round of luxury car destruction

The Philippine government crushed a parking lot full of luxury, sports and classic cars on Wednesday as part of its aggressive public campaign against the illegal importation of vehicles.

The action in Port Irene, Cagayan, followed a similar one that took place in Manila in February, and was again overseen by President Rodrigo Duterte.

A bulldozer and an excavator were used to smash and drive over the fleet of vehicles, which had been in storage for several years and included eight Mercedes-Benz models, a Porsche 911 GT3 and a rare Renault 5 Turbo from the 1980s.

They were just the first of over 800 vehicles set to be destroyed.

A bulldozer and an excavator were used to put on a destructive show. (Presidential Communications Operations Office)

The vehicles had been intentionally abandoned at the port without paying customs, so that an importer could purchase them later from a government auction at a lower price, according The Inquirer. A court ruling made this type of scheme illegal in 2013, and the outfit that imported these vehicles is not contesting the decision to crush them, The Manila Times reported.

"The destruction of these contraband luxury vehicles signifies our strong resolve to restore good governance, preserve our nation's dignity and safeguard our people's welfare," Duterte said at the event, which was broadcast on Facebook.

Duterte’s hardline stance on crime has led to an investigation by the International Criminal Court into thousands of deaths during his government’s war on drugs since 2016. In response, the Philippines announced this week it plans to withdraw from the organization.