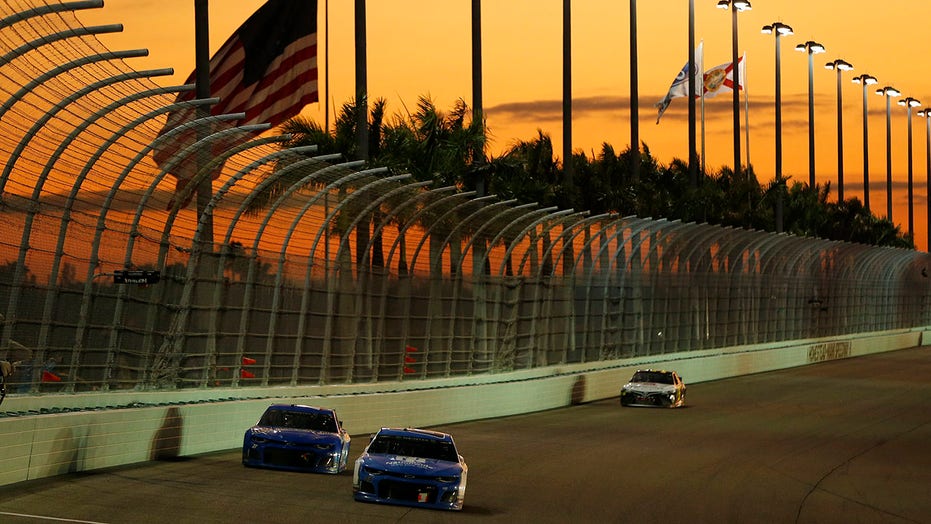 NASCAR driver Jesse Iwuji, who is also a lieutenant commander select in the Navy Reserve, reacts to veterans being in the stands at Homestead-Miami Speedway on 'Fox &amp; Friends.'

NASCAR fans will be back in the stands for the Dixie Vodka 400 at Homestead-Miami Speedway on Sunday afternoon. Just not a lot of them.

The track has donated 1,000 tickets to local members of the U.S. military and their families for the race, which will mark the first time any spectators have been in attendance since the Cup Series returned from hiatus a month ago. The move was made possible by Florida moving to stage two of its reopening, which allows a limited number of fans at sporting events. The tickets were distributed to the nearby Homestead Air Reserve Base and U.S. Southern Command in Doral, where they were issued on a first-come basis.

“The ability to host guests for the Dixie Vodka 400 is an important step in the return of live sporting events across the globe,” Homestead-Miami Speedway President Al Garcia said in a statement. “The opening of our track 25 years ago was a sign of hope following the devastation in South Miami-Dade County as a result of Hurricane Andrew in 1992. Today we are privileged and feel a deep sense of responsibility for the same chance during these challenging times. Having South Florida service members at our race is a true honor, and is very symbolic as we begin to have guests back at our NASCAR events.”

Everyone at the track will be screened for COVID-19 symptoms and be required to wear masks while adhering to social distancing protocols. NASCAR this week also enacted a ban on the display of the Confederate flag at all of its races.

The race also marks the first time a Cup Series event hasn't been held at the track in November, since it was replaced this year by Phoenix Raceway as the season finale venue. Kyle Busch is the defending champion, having clinched the Cup Series title with a win on 1.5-mile oval last year.

Homestead-Miami has also announced it is renaming the Turn 3 tunnel where drivers enter the track in honor of Jimmie Johnson, who capped all seven of his championships at the facility and is retiring at the end of this season.

Due to the restrictions in place, there will be no practice or qualifying and the starting lineup was set by a random draw that put Denny Hamlin in pole position. The race will be broadcast on Fox at 3:30 p.m. EDT.

Here's the full starting lineup for the Dixie 400: