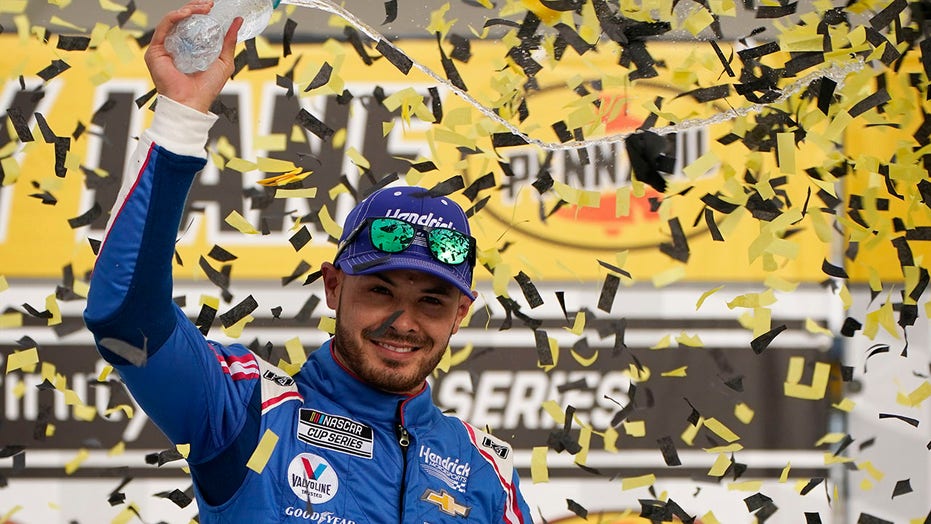 Kyle Larson is back in NASCAR and back in victory lane.

On Sunday at Las Vegas Motor Speedway, Larson raced to his first NASCAR victory since he was reinstated from a nearly yearlong suspension. He ran just the first four races last season, then lost his job for using a racial slur while playing a video game early in the pandemic.

He worked all last year on rebuilding his image and was hired by Hendrick Motorsports when NASCAR said the suspension would lift at the start of this year.

"Thanks Mr. H. for believing in me," Larson radioed to boss Rick Hendrick after crossing the finish line.

He then celebrated his first career on an intermediate track with a smoke-filled burnouts. Bubba Wallace, NASCAR's only Black fulltime driver, was the first competitor to congratulate Larson at his car.

Larson's move to Hendrick was expected to be electric.

Larson is considered one of the top talents in NASCAR but won just six times in six seasons with Chip Ganassi Racing. Paired with mighty Hendrick, everyone suspected Larson would at last reach his full potential.

KYLE LARSON: "ABSOLUTELY NO EXCUSE FOR MY IGNORANCE"

The victory came in his fourth race in the No. 5 Chevrolet and gave Hendrick back-to-back victories. William Byron won last week at Homestead-Miami Speedway, so Hendrick has two of its four drivers locked into the playoffs just one month into the new season.

It was the first win for crew chief Cliff Daniels, and first for that crew since 2017 with Jimmie Johnson.

"He knew deep down inside that he could get back to this level," Daniels said of Larson.

His seventh career win made him the third driver so far who was not part of the 16-driver playoff field last season to grab one of the spots. The season opened with three consecutive surprise winners in Michael McDowell, Christopher Bell and then Byron.

Larson isn't exactly a surprise and Las Vegas was supposed to be the track in which the large teams finally took control. The 1.5-mile intermediate is the bread-and-butter of the NASCAR schedule and the top organizations have the depth and resources to dominate the circuits.

The top-nine finishers Sunday all represented NASCAR's elite teams, with Erik Jones for single-car Richard Petty Motorsports the only surprise with a 10th-place finish.

Brad Keselowski of Team Penske was second in a Ford and followed by hometown driver Kyle Busch and Denny Hamlin in Toyotas for Joe Gibbs Racing.

Ryan Blaney was fifth for Penske and then Martin Truex Jr. and Bell put all four JGR cars in the top seven. Byron was eighth and defending race winner Joey Logano was ninth for Penske.

The lender is the primary sponsor for Bilicki's No. 52 Rick Ware Racing Ford Mustang and company CEO Chuck Brennan bet $10,000 at Circa that the driver would win his first career race at Las Vegas. At 1,000-1 odds, the bet would have paid Brennan $10 million.

Brennan also offered to wipe the loans of all Dollar Loan Center customers in Nevada if Bilicki won.

Alas, Bilicki finished 35th. He was one of eight drivers tied for the longest odds to win Las Vegas.

Brennan's bet was hardly a throwaway, though.

The $10,000 was essentially an advertising spend that drew attention to the sponsor, the driver and the team. It's the same tactic used Friday night by Camping World CEO Marcus Lemonis, who paid $15,000 each to 10 unsponsored teams to wrap their trucks with the company logo.

NASCAR heads 300 miles south to Phoenix Raceway, where Chase Elliott won in November for his first Cup championship. The Phoenix race last March, won by Joey Logano, was NASCAR's fourth event of the season and final before the pandemic. The track was the last facility to host a regular NASCAR weekend with full spectators and a prerace show that featured both Blake Shelton and Pitbull.