Turkey launches airstrikes near US base in Syria

Chief national security correspondent Jennifer Griffin reports on how the Pentagon has responded to recent airstrikes that threatened the safety of U.S. personnel in Syria, on 'Special Report.'

There is significant concern that Turkey’s planned ground invasion into Syria to root out the U.S.-allied Kurds could open the floodgates for the release of thousands of imprisoned Islamic State terrorists.

Syrian Kurdish forces have incarcerated thousands of ISIS terrorists from more than 50 countries in prisons in northeastern Syrian.

Turkish President Recep Tayyip Erdogan declared, "This is not limited to just an air campaign," adding, "We will consult with our defense ministry and general staff and decide together to which our land forces needs to contribute, then take our steps accordingly." Earlier, Turkey's defense minister was quoted by the country's media as saying the operation continues with some 326 enemy combatants killed so far.

Combating a resurgence of the terrorist movement Islamic State remains a top priority for the U.S. military. The U.S. formed an alliance with the YPG to oust ISIS, while conflict between Erdogan and the Kurdish forces in Syria may be moving from a localized conflict to a full-blown war.

Turkish Embassy officials in Washington told Fox News Digital, "We have time and again pointed out threats against our national security, posed by the PKK/YPG terrorist network in Syria and Iraq. We have always called for unequivocal and genuine solidarity in the face of terrorism in all its forms and manifestations."

Recep Tayyip Erdogan, Turkish president and leader of the Justice and Development Party, is greeted by his party members before addressing a meeting at the Turkish Grand National Assembly in Ankara, Turkey, on Wednesday. (Adem Altan/AFP via Getty Images)

The Turkish diplomat added, "Notwithstanding, the terrorist organization continued its attacks, recently targeting innocent civilians in the heart of Istanbul. As a result of the attack perpetrated on Nov. 13, 2022, six civilians were killed and 81 injured."

The U.S. government has classified the PKK as a terrorist organization, but views the YPG as valuable partner in the fight against the Islamic State.

U.S. State Department spokesman Ned Price recently said, "We express our sincere condolences for the loss of civilian life that has occurred in Syria and Turkey" and urged an "immediate de-escalation."

Mohamad said the region’s Arabs, Christians and Kurds, who make up the area’s five million people, are "suffering."

Women walk in the al-Hol camp, which houses some 60,000 refugees, including families and supporters of the Islamic State group. (AP Photo/Baderkhan Ahmad, File)

She added Turkey has bombed the region 47 times from Nov. 19-23, and the air strikes killed six soldiers from the Syrian Democratic Forces (SDF), including two anti-terror soldiers trained by the U.S. military.

Mohamad, who is in contact with Syrians on the ground in the conflict zone, said Turkish forces have killed 15 civilians since the start of this round of air strikes: "Turkey is now targeting vital infrastructures, power stations, grain silos, and oil and gas infrastructures."

She claimed the Turks attacked a hospital and they "targeted very close to an ISIS prison. Imagine if they targeted the prison, and the people escaped. It is a very critical situation. The international community and U.N. should take action to prevent Turkey from destabilizing the region."

A leading expert on Turkey, Hay Eytan Cohen Yanarocak, from the Jerusalem Institute for Strategy and Security, cast significant doubt on Turkey’s rationalization for launching its most recent attacks.

"The latest terror attack against Istanbul was carried about by Syrian forces who were dissatisfied with Turkey’s U-turn because Turkey signaled it was willing to normalize relations with [Syrian President] Bashar al-Assad," he told Fox News Digital.

He added, "Erdogan knows very well that it would be a lot easier to punish the Kurds instead of punishing Syrians. We know the Free Syrian Army is considered an ally of Turkey. If the Free Syrian Army was tagged as responsible [for the terror attack in Istanbul], his foreign policy doctrine would collapse."

TURKISH OFFICIAL ACCUSES US OF COMPLICITY IN DEADLY BOMBING: 'THE KILLER IS AMONG THE FIRST ONES RETURNING'

The pro-Kurdish party, The People’s Democratic Party, in the Turkish parliament submitted a motion requesting an inquiry into the Istanbul attack. Erdogan’s Justice and Development Party along with his ally, the Nationalist Movement Party, rejected the investigation. 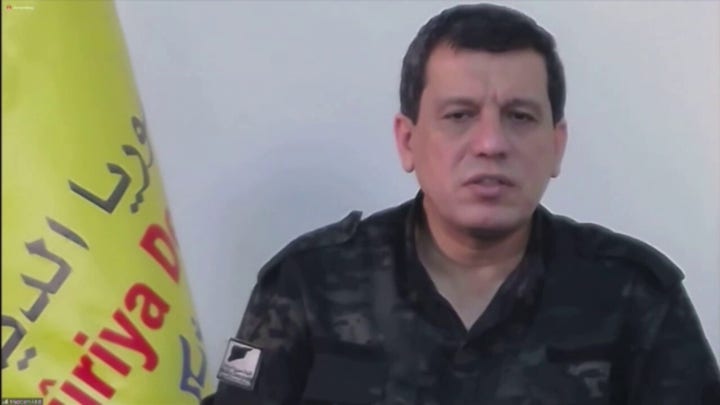 All Kurdish military forces in Syria, as well as the PKK, have flatly denied responsibility for the Istanbul terrorism attack. The commander of the SDF, Gen. Mazloum Abdi, speaking exclusively to Fox News’ Jennifer Griffin, claimed the Istanbul bomber was from the Islamic State.

Turkey has captured a Syrian Arab woman who Turkish authorities said confessed to the bombing. Erdogan has faced accusations of showing sympathy for radical Islamists operating in northern Syria.

Uzay Bulut, a Turkish political analyst and research fellow for the Philos Project, told Fox News Digital, "If Kobane falls to Turkey, Turkey will occupy it alongside jihadists organizations, as they also do in other Syrian cities such as Idlib and Afrin. Naturally, these Turkish military attacks against the SDF will weaken the counter ISIS campaign in the region."

According to Bulut, "The Turkish regime must be fully aware of that such an occupation only helps ISIS and al-Qaeda affiliated terror groups in the region."

A Turkish official rebuffed such an argument and told Fox News Digital, "We are the only NATO ally that has boots on the ground and fought DAESH [Islamic State] chest-to-chest since the outset."

People inspect a site damaged by Turkish airstrikes that hit an electricity station in the village of Taql Baql, in Hasakeh province, Syria, on Sunday. (AP Photo/Baderkhan Ahmad)

Turkey’s foreign policy stature has gained greater currency within the Biden administration since Russia invaded Ukraine in February. Soner Cagaptay, the director of the Turkish Research Program at the Washington Institute, said, "Turkey is helping Ukraine militarily" against Russia.

Even in light of Turkey’s improved international reputation, Cagaptay does not see the Biden administration leaving the Syrian Kurds out to dry. "Turkey’s importance to the U.S. has increased, and it does not mean [the] U.S. has completely abandoned YPG," he said.