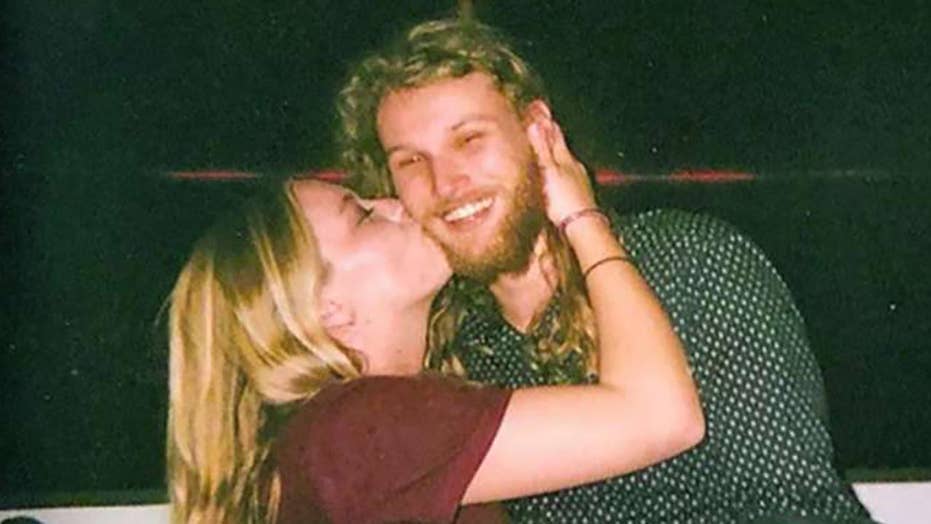 Canadian authorities are asking the public to "remain vigilant" after two teenagers were reported missing -- and their truck discovered burning -- in the same region where a 24-year-old North Carolina woman and her Australian boyfriend were found murdered last week along a remote stretch of highway.

The two teens were transiting through British Columbia to Whitehorse, Yukon reportedly in search of work, but RCMP said it was unclear why they returned to B.C. or what their travel plans were. Both were traveling in a red and gray Dodge pickup truck with a sleeping camper that was discovered the following day on fire south of the Stikine River Bridge on Highway 37, about 31 miles south of Dease Lake.

While authorities were investigating the burning truck Friday they discovered a body at a nearby highway pullout. RCMP said Sunday that the body was not Kam or Bryer, however, and authorities were still working to identify the male remains.

Bryer Schmegelsky (left) and Kam McLeod (right) were reported missing after their camper van was found burnt out on Friday and their families lost contact with them, according to police. (Dease Lake RCMP)

"It is unclear at this time how this deceased male might be connected with the vehicle fire or the two missing men," RCMP spokesperson Dawn Roberts said in a news release.

The incident came just a few days after the bodies of a young couple were discovered on the side of a highway in northern British Columbia, roughly 292 miles away from where the body was discovered Friday. While authorities have not said there's any connection between the two incidents, officials acknowledged Sunday there are "growing community concerns" about the ongoing homicide investigations in the region.

A red and grey Dodge pickup truck and sleeping camper driven by Kam McLeod and Bryer Schmegelsky was found abandoned and on fire south of the Stikine River Bridge on Highway 37 on Friday. An unidentified male body was found nearby at a nearby highway pullout. (Dease Lake RCMP)

The Dease Lake incident took place Friday, while the killings of Chynna Deese and Lucas Fowler are believed to have taken place between July 14 and 15, according to police.

"At this time, investigators are sharing information and police would like to ensure awareness around both investigations," Roberts said. "The RCMP would ask the public to continue to take any general safety precautions and remain vigilant at this time. We also remind travelers to share your plans with family and friends, establish check-in times and notify someone if your plans change."

The couple was traveling in an older blue Chevrolet van that Fowler had fixed up for the planned through trip Canada and was killed near Liard Hot Springs, a popular tourist destination. Deese's mother, Sheila Deese, told CBC News that authorities said her daughter had been shot.

In an interview Monday on "America's Newsroom," Sheila Deese, told Fox News' Sandra Smith she was first informed about the killings Wednesday night around 11 p.m. when police knocked at their North Carolina home and told her daughter was deceased. But Deese said she was first wasn't give a lot of information until contacting authorities in Canada.

"Very little details, not a lot," she told Fox News. "I wasn't even told at the time it was gunshots. I didn't know if her companion was with her or not until I was able to speak with to Canadian police, and they said both were deceased."

Australian authorities are now assisting in the investigation, according to Sheila.

While RCMP has not yet released details about what happened prior to the couple's killing, Canadian Sandra Broughton told her Facebook followers Wednesday that she and her husband saw the couple’s van Sunday broken down on the side of the highway and asked if they needed help.

“Curtis (being the helpful mechanic ) usually stops and asks if everyone is ok and if they need help,” she wrote. “Yes, he contacted the RCMP and let them know that we see and talked to them after we left the hot springs.”

A road worker who was in the region at the time told Nine News Australia she saw a bearded man last Sunday night who appeared to be arguing with the couple hours before they were found dead.

"To me he kind of looked frustrated or something," Alandra Hull said. “Like he was just kind of standing like this and just looking at them.”

Hull said the couple appeared to be bothered by the man, and the interaction made her uneasy.

“If you just get a bad feeling, and that’s what I had, you just don’t stop,” Hull told Nine News. She added that police have also asked her to work with a composite artist to create a sketch of the man she saw speaking with the couple Sunday evening.

Lucas Fowler and his girlfriend Chynna Deese are shown in a handout photo. Both were found dead on an isolated highway in northern British Columbia last week. (New South Wales Police Force.)

On Sunday, Canadian authorities insisted the body found nearby the burning truck was not related to the murdered couple.

"We have nothing to indicate their deaths are linked to any other active and ongoing investigations in the area of the province, or that there is a heightened risk to public safety," RCMP spokeswoman Janelle Shoihet told reporters.

But family members of the murdered couple said that answer wasn't good enough.

Deese’s brother, British Deese, said Monday on "America's Newsroom" the pair traveled a lot and their plan was to travel through Canada to visit all the national parks.

"We don't know that much else other than these details," he told Fox News. "It's been very secretive and they have an ongoing investigation."

British Deese said he would "pray to God" that authorities in Canada and the U.S. government make sure whoever is behind the killings is caught.

"You should be able to go to Canada in the summertime and visit national parks without fear of something like this happening," he said.

He added his family is "taking it day by day," and he has since woken up with panic attacks.

"Its kind of like your body is processing and taking this in whether you want to or not, and it's just new feeling every day," he said. "This is going to hurt the rest of our lives."

In the case of the now-missing teenagers, RCMP said the Kam and Bryer have periodically connected with family and friends over the past week, but "it is possible that they are now in area without cell coverage."

"We are asking for Kam or Bryer to connect with police right away and let us know you are okay. Or, we ask that anyone who may have spoken to or seen them over the last few days to call police so we can get a better understanding as to where they might be or their plans," Roberts said.

Both teenagers are described as roughly 6-foot-4 and weighing 169 pounds, according to police. McLeod has dark brown hair and facial hair and brown eyes, while Schmegelsky has sandy brown hair.

Anyone with information on the whereabouts of the teenagers or their travels before the vehicle was found burning is asked to contact the Dease Lake RCMP at 250-771-4111, Crimestoppers at 1-800-222-8477 or by leaving a tip online at www.crimestoppers.net.