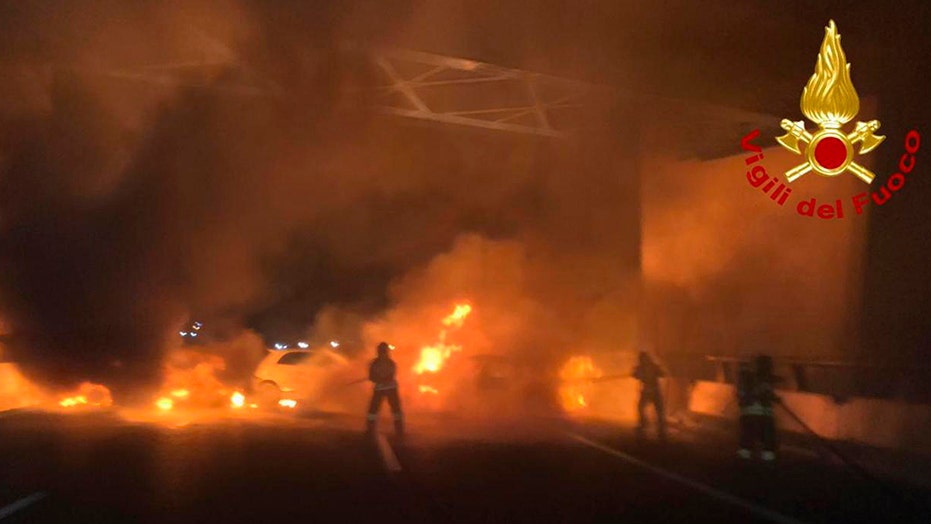 An attempt to rob an armored vehicle went up in smoke.

A gang of thieves set up barriers of burning vehicles and spilled nails on a highway near Milan in hopes of ransacking an armored vehicle, but they were foiled when the driver evaded their traps, news reports say.

The dozen people believed to be behind the Tuesday night operation fled the scene. They remain at large as of Wednesday, The Associated Press reports.

In this photo released by the Italian firefighters, firemen try to extinguish a dozen vehicles on fire on a highway near Milan, Italy, early Wednesday. (AP/Italian Firefighters)

Photos released by firefighters showed vehicles in flames on the darkened highway.

The gang is reported to have set a dozen vehicles on fire in both directions of the highway and then rammed the armored vehicle with a tractor trailer.

In a bid to rob an armored vehicle, a gang of thieves set up barriers of burning vehicles and spilled nails on a highway near Milan but were foiled when the driver evaded their traps. (AP/Italian Firefighters)

Yet the driver of the armored vehicle managed to pull into a rest area and a nearby police patrol intervened.

In a similar assault in 2014 – involving a burning barrier along the same stretch of highway – armed bandits made off with $5.5 million, the AP reports.