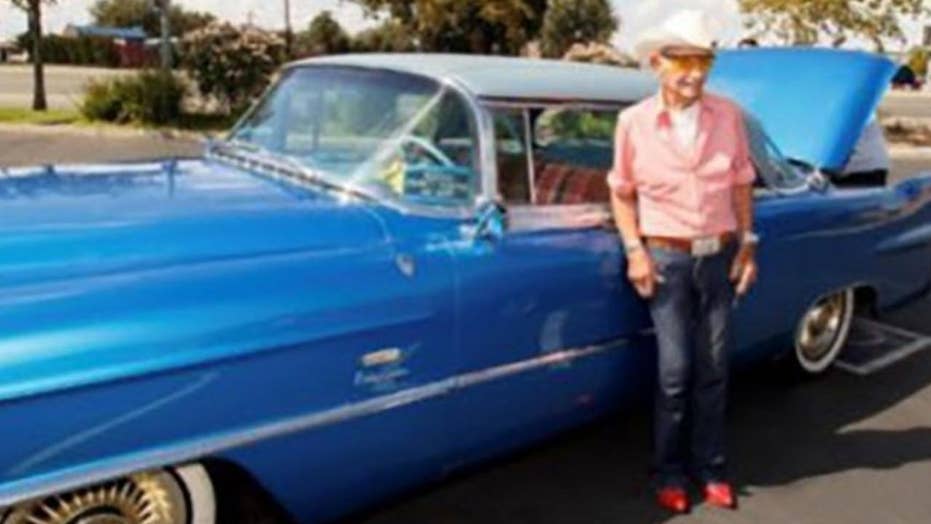 Curly Bunfill's 1956 “Burmuda Blue” Cadillac Eldorado was a gift Rita Hayworth left him in her will. It was recently stolen, but later dropped off at police headquarters in Sacramento.

A classic Cadillac willed to a 106-year-old World War II veteran and former stuntman by Hollywood Golden Age actress Rita Hayworth has been found after thieves stole it from a garage in California, authorities said.

The 1956 Bermuda blue Cadillac Eldorado was found safe and given over to police on Monday, three days after it was reported stolen, Sacramento Police wrote on Twitter.

The car’s centenarian owner, Curly Bunfill, earned three Purple Hearts while serving in World War II, FOX40 Sacramento reported. He told the station he started working as a stuntman in Hollywood after he returned from the war and eventually met Rita Hayworth.

Actress Rita Hayworth left Bunfill the car in her will, he said. (Sacramento Police)

Bunfill recalled the true Hollywood story of how he came to be in possession of the classic – a story that begins at a party.

“Our eyes met and we danced,” Bunfill told the station of his first meeting with Hayworth. “And she had all these cars in her garage, beautiful, beautiful cars. We danced around the cars.”

The veteran said the actress, described by the press in the 1940s as “The Love Goddess” for her glamorous screen appearances, left him the Cadillac in her will when she died in 1987.

Police said the doors, rear end, and engine block are all engraved with the name “Rita Hayworth” and multiple car show trophies were kept inside the classic.

“When that car is gone, part of me is gone. I just feel terrible,” Bunfill told the station after the theft.

No arrests have been made and the investigation is ongoing, police said. The car’s condition at the time police located it was unclear.