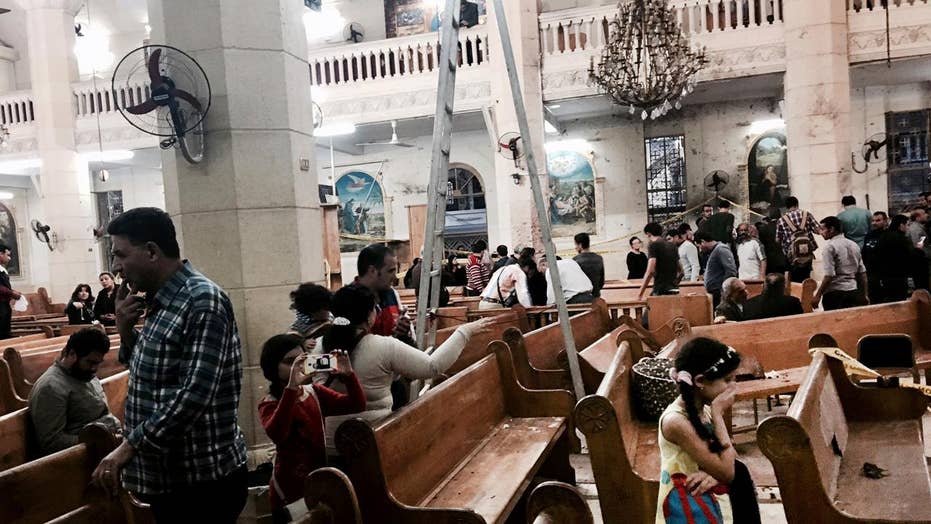 Security measures may have saved lives in Egypt bombing

Warnings of an "imminent" terror attack forced Israel to close its Taba border crossing to the Sinai peninsula Monday, one day after terrorists in Egypt bombed two Christian churches, killing dozens of worshippers on Palm Sunday.

Soon after the announcement, rocket attack sirens wailed in parts of the region. The military said a rocket fired from Sinai exploded in southern Israel, hitting a greenhouse but causing no injuries. The Islamic State terror group later claimed responsibility for the attack.

Israel urged its citizens to leave Egypt immediately, hours before the start of the Passover holiday, when Sinai is a popular destination for many secular Israelis. Yisrael Katz, Israel's transportation and intelligence minister, said in a statement Monday there was intel regarding a potential "terror attack" against tourists in the Sinai peninsula.

The crossing remains open for those wanting to return from Egypt. Foreign nationals also would be able to cross the border, Haaretz reported.

Prime Minister Benjamin Netanyahu issued a statement Monday sending Israel's "condolences to the families of those who were murdered in yesterday's terrorist attacks in Egypt" and wishing a "quick and full recovery to the wounded."

He said "the world must unite and fight terrorism everywhere."

The Israeli government statement says that intelligence information shows "increased activity by Islamic State" militants in Sinai. It adds that with the Islamic State group losing ground in Iraq and Syria, there is renewed "motivation to carry out terror attacks in different arenas at this time."

Israel called on its citizens to leave Egypt on the eve of the Passover holiday that commemorates the biblical Exodus story of the Israelites' escape from slavery in Egypt.

The weeklong festival is widely celebrated in Israel even among otherwise nonreligious Jews. But southern Sinai, with its pristine beaches and Red Sea coral reefs, has traditionally been a popular Israeli tourist destination -- especially for secular Israelis during the Passover holiday.

Israel mostly shuts down after sundown for the holiday, as families and friends gather for Seder, the ritual multi-course meal where the story of the exodus from Egypt is discussed in detail so that the tradition is preserved throughout the generations.

Leavened goods like bread and items made from yeast such as beer are banned during the holiday.  Instead, Jews eat matzo -- unleavened bread -- to illustrate how the Israelites had no time to let their bread rise as they fled from bondage in the land of the Pharaohs.

Despite the relaxing draw of Sinai, tourism there has declined since 2013, when the Egyptian military overthrew an elected Islamist president and an Islamic insurgency based in northern Sinai intensified.  Rocket attacks on Israel from Sinai are relatively rare but Islamic militants there have been behind a few attacks in recent years. Egypt has been battling the militants, many linked to the Islamic State group.

Israel issues travel recommendations from time to time based on intelligence reports. Monday's travel warning was unusual in its urgency and it is rare for the Taba crossing to be shut down.