Europe's human rights court orders Italy to pay Amanda Knox financial damages after police failed to provide her legal assistance and a translator during the investigation into her roommate's murder.

Amanda Knox will soon be back on Italian soil.

The American is making a return to Italy for the first time since being convicted, imprisoned and then ultimately acquitted of the 2007 murder and sexual assault of her British roommate, Meredith Kercher, in town of Perugia.

Knox, 31, will attend a conference in Modena on June 14-15 organized by the Criminal Chamber of the northern city and the Italy Innocence Project, which seeks to help people who have been convicted of crimes they did not commit.

"The Italy Innocence Project didn't yet exist when I was wrongly convicted in Perugia," Knox tweeted Tuesday. "I'm honored to accept their invitation to speak to the Italian people at this historic event and return to Italy for the first time."

The 31-year-old Seattle native will speak at an event on "trial by media," and the role of the media in judicial errors on the last day of the conference.

"We wanted to invite her because we believe that she is an icon of trial by mass media," Guido Sola, one of the organizers of the event, told the ANSA news agency.

Amanda Knox says she is returning to Italy for the first time since she was convicted and imprisoned, but ultimately acquitted, for the murder and sexual assault of her British roommate Meredith Kercher in the university hilltop town of Perugia. (AP Photo/Ted S. Warren)

Knox appeared to acknowledge her high-profile media presence in a subsequent tweet, writing "Here we go! Anyone know a thrift shop where I can find some of this paparazzi resistant clothing?"

Knox and her former boyfriend, Raffaelle Sollecito, were initially convicted in 2007 of Kercher's slaying in the hilltop university town.

The sensational murder of the 21-year-old woman attracted global attention, especially after suspicion fell on Knox, and Sollecito. Kercher was found nude under a blanket, with her throat slit. 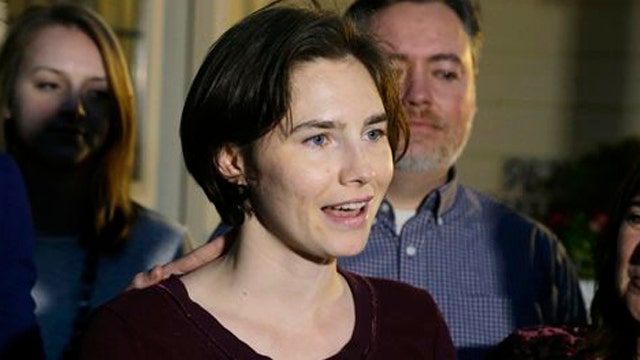 After the Buzz: Our Amanda Knox obsession

Their convictions were ultimately annulled by the country's highest court in 2015 after a yearslong series of flip-flop higher-court decisions.  Judges in that final ruling cited flaws in the investigation and said there was a lack of evidence to prove their wrongdoing beyond a reasonable doubt, including a lack of "biological traces" connecting them to the crime.

Italy's highest court did, however, confirm a conviction against Knox for falsely accusing a Congolese bar owner.

In January, Europe's human rights court ordered Italy to pay Knox financial damages for police failure to provide legal assistance and a translator during a long night of questioning after Kercher's slaying.

Amanda Knox was dubbed "Foxy Knoxy" during her trial for the 2007 murder of her roommate. (Reuters)

The European Human Rights Court in Strasbourg, France, said in its ruling that Italy hadn't succeeded in proving that "the restriction of Ms. Knox's access to a lawyer...had not irreparably undermined the fairness of the proceedings as a whole," and ordered that Italy must pay Knox $20,000 in damages, costs and expenses.

The only person to have been convicted of Kercher's murder is an Ivorian immigrant, who is now serving a 16-year sentence for the killing.