The real woman behind the Molly Pitcher legend

Margaret Corbin was one of the first women to fight in the American Revolution; Bret Baier reports on the remarkable story of 'Captain Molly.'

From atop a makeshift fort high above the Hudson River, a young woman aimed a cannon at a mass of Hessian soldiers swarming up the steep, rocky slopes and fired. Her husband, a Patriot soldier, was just killed in battle and she stepped in to take his place.

Her name was Margaret Corbin.

At 24 years old, "Captain Molly” became one of the first women to fight in the American Revolution — and later the first woman to receive a life-long pension from Congress, making her the first female veteran of the United States. For decades, Corbin’s grave site at West Point — a granite monument within a sacred space of green — was honored by all who passed through the storied cemetery.

"She deserves to have the burial that she earned with her military service at the Battle of Fort Washington."

— Jennifer Minus, Daughters of the American Revolution

Then, a shocking discovery.

An archeological exam of the bones buried beneath showed they were not Corbin’s but instead those of an unidentified man. Now, the Daughters of the American Revolution is on a mission to find Corbin’s remains and bring the American heroine to her rightful resting place.

"She was a wounded warrior, a prisoner of war and a disabled veteran,” said Jennifer Minus, a DAR official who first learned about Corbin when she was a West Point cadet in the early ‘90s.

"She deserves to have the burial that she earned with her military service at the Battle of Fort Washington," Minus said. "We are determined to find her."

Corbin's heroic story began on Nov. 16, 1776, when she accompanied her husband's military unit at the Battle of Fort Washington in northern Manhattan, cooking, washing and attending to the injured soldiers.

John Corbin, a cannoneer, was among 2,900 American soldiers defending the fort from some 9,000 British and Hession troops as General George Washington watched from across the Hudson River.

When Corbin's husband was killed by enemy fire, the young woman sprang into action. Well-versed in how to operate a cannon, she assumed an artilleryman's position until she was hit by three grapeshot in the jaw, left shoulder and breast, leaving her disabled for the rest of her life.

Greatly outnumbered, Colonel Robert Magaw, who was commanding the fort, surrendered to the British. Corbin and some 2,800 other Patriot soldiers then became prisoners of war, according to historical accounts. Corbin was paroled a few days later and then eventually enrolled in the "corps of invalids" at West Point.

On July 6, 1779, Corbin was granted a life-long Army pension from the Continental Congress for her military service, though pension records show she was given half a soldier's pay. She was also given a suit of clothes annually and often dressed in old uniforms, which earned her the nickname "Captain Molly."

After her death in 1800 at age 48, Corbin faded into oblivion and was nearly forgotten.

In 1926, the DAR pinpointed what the group believed was Corbin's grave site a few miles south of West Point near a cedar stump on the old estate of banker J.P. Morgan. The disinterred remains were taken to West Point and buried underneath a monument depicting Corbin.

But in late 2016, cemetery excavators accidentally struck the grave, prompting officials to order high-tech tests on the disturbed remains. A forensic exam concluded the remains belonged to an unidentified man from the nineteenth century.

"There's really no question that the bones are from a man," said Dr. Elizabeth DiGangi, who conducted the examination. 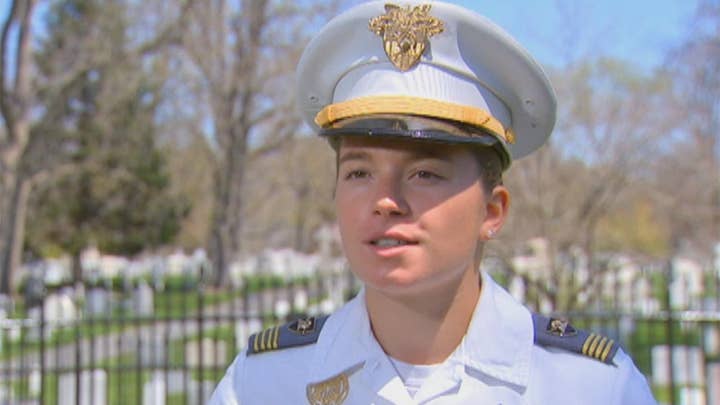 DiGangi, an assistant professor of anthropology at Binghampton University, also noted that the remains in question did not show injuries consistent with those sustained by Corbin during battle.

"I did not find any of the injuries I would expect to see, especially in the shoulder," said DiGangi. "There was nothing there to indicate any kind of healing."

On May 1, the DAR held a rededication ceremony for Corbin at West Point, where Ann Turner Dillon, DAR president, vowed to find her remains.

"I've been asked why we are continuing to search for Margaret Corbin," Dillon told other DAR members who had gathered on a spring morning to pay tribute to the war heroine inside the West Point Cadet chapel.

"Our motivation lies at the very core of our organization," Dillon said. "The Margaret Corbin story is important to the DAR because it epitomizes the very reason our organization was founded ... to preserve the memory and spirit of those who contributed to securing American independence."

Corbin's influence spreads well beyond members of the DAR. Her monument was erected at West Point some 50 years before the first female cadets, and her story has served as a model of unflinching bravery and sacrifice for women in the U.S. military.

"When I think of Margaret Corbin, I think of hero, trail blazer, the first, and bravery," said Leslie Frankland, a 23-year-old West Point cadet.

"I am hopeful that one day we will find her," said Frankland. "But I think this monument represents her well regardless of whether she is found."

Editor's Note: Cristina Corbin is a distant relative of Margaret Corbin's husband, John. She is eleventh generation American and has 31 ancestors who fought in the Revolutionary War.