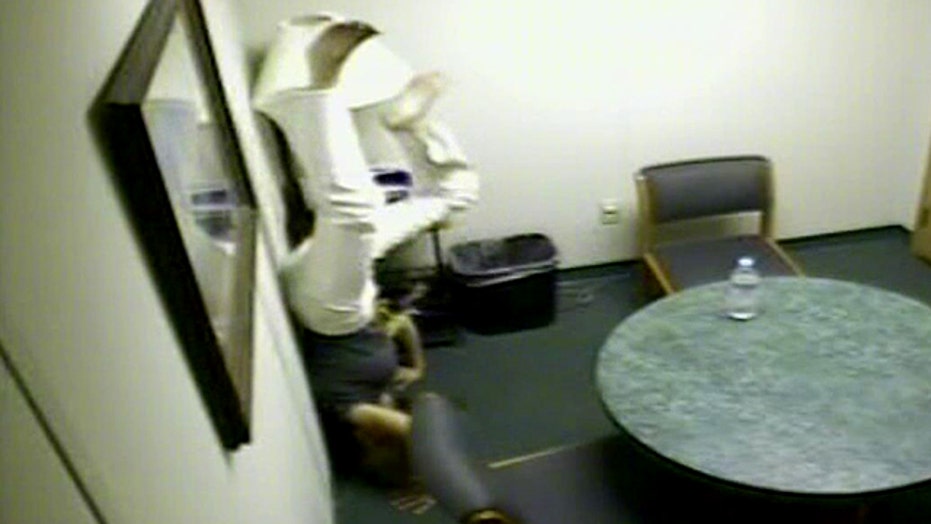 Minutes before Jodi Arias was charged with the brutal murder of her boyfriend, she was caught on video singing, laughing, asking about her makeup and doing a 20-second headstand.

The July 15, 2008, video catches her just 15 minutes after sobbing through a four-hour police interrogation. Her attitude dramatically changes.

Once the prosecutor leaves the room Arias is seen talking to herself, laughing and playing with a garbage can. She then does a headstand against the wall.

Arias, who testified for 18 days over nearly six weeks, has cited self defense, masked intruders and memory loss in justifying the 2008 killing of her boyfriend, Travis Alexander.

A psychologist testified Thursday that jurors should see Arias' unusual behavior in context.

“A large percentage of individuals who are in such settings do not remember or have cloudy or foggy memories of what has transpired,” Richard Samuels testified. “We are more concerned with survival.”

He said he has met with Arias a dozen times and eventually diagnosed her with post-traumatic stress disorder.

“There are many people that never remember the actual events,” Samuels said.

In the 2008 video, Arias is heard singing a song with the lyrics, “it might change my memory.”

Arias initially told authorities she had nothing to do with the murder, but her defense now argues the killing was in self defense. During testimony, Arias has described an abusive childhood, cheating boyfriends, dead-end jobs and a shocking sexual relationship with Alexander, and she contends he had grown physically abusive in the months leading up to his death, once even choking her into unconsciousness.

Samuels testified that Arias lied initially about her involvement because she was in denial “where a person cannot deal with the fact that something they did is so opposite from everything else in their life.”

Alexander suffered nearly 30 knife wounds, was shot in the head and had his throat slit before prosecutors say Arias dragged his body into the shower.

Arias testified she remembered Alexander attacking her and that she ran into his closet, retrieved a gun he kept on a shelf and fired in self-defense. She has testified that she has no memory of the stabbings.

Arias’ grandparents had reported a .25-caliber handgun stolen from their Northern California home about a week before the murder – the same caliber used to shoot him – but Arias said she didn’t take it. Authorities think she took it with her.

Arias has acknowledged trying to clean the murder scene, dumping the gun in the desert and leaving Alexander a voicemail on his cellphone hours later in an attempt to avoid suspicion. She said she was scared to tell the truth.

No witnesses have been able to confirm Arias allegations about Alexander’s violence, gun ownership and sexual desire for young boys.

She has acknowledged lying repeatedly but insists to jurors that she is telling the truth now.

The trial is set to resume Monday. She could get the death penalty if convicted.

“If I am convicted, that’s because of my own bad choices,” Arias said.