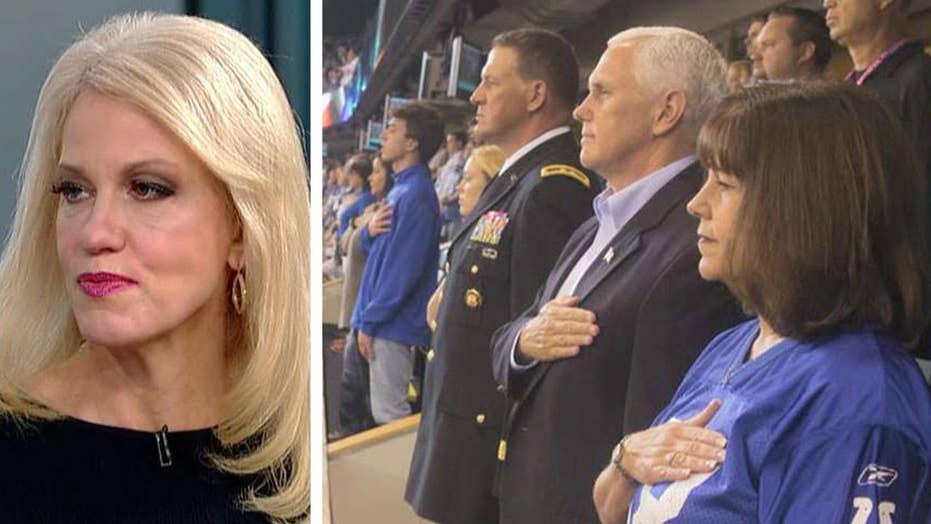 Senior counselor to the president weighs in on 'Fox & Friends.'

Vice President Mike Pence walked out on his home-state Indianapolis Colts Sunday when members of the opposing team kneeled for the national anthem, but a report that Colin Kaepernick, the player who started it all, will stand if given another shot in the NFL was quickly dialed back.

"I left today's Colts game because @POTUS and I will not dignify any event that disrespects our soldiers, our Flag, or our National Anthem," Pence tweeted.

Several San Francisco 49ers players kneeled for the anthem on Sunday in Indianapolis.

Pence later posted a statement which read, "I left today's Colts game because President Trump and I will not dignify any event that disrespects our soldiers, our Flag, or our National Anthem. At a time when so many Americans are inspiring our nation with their courage, resolve, and resilience, now, more than ever, we should rally around our Flag and everything that unites us."

"While everyone is entitled to their own opinions, I don't think it's too much to ask NFL players to respect the Flag and our National Anthem," he continued. "I stand with President Trump, I stand with our soldiers, and I will always stand for our Flag and National Anthem."

President Donald Trump later tweeted, "I asked @VP Pence to leave stadium if any players kneeled, disrespecting our country. I am proud of him and @SecondLady Karen."

Trump's son Eric also took to Twitter Sunday, writing, "Vice President Pence is truly an amazing man! Thank you for standing up for our country and for the respect of our great flag! @VP"

While a quarterback for the 49ers last year, Colin Kaepernick sat or kneeled during the national anthem last season to bring more attention to the killings of black men by police officers. The protests have grown this season.

Meanwhile, CBS Sports' Jason La Canfora corrected his report that had claimed Kaepernick would stand during the national anthem if given a chance to play football in the NFL again.

"Wanted to clarify one thing regarding @Kaepernick7. When I was asked about his whether or not he would sit or stand for anthem ..." La Canfora tweeted after the report came out earlier Sunday.

"Standing for Anthem wasn't something that I spoke to Colin about," the reporter added. "I relayed what had been reported about him standing in the future..."

"Reports about @Kaepernick7 standing for anthem had not been refuted," La Canfora wrote. "However, I cant say if they are true or not. Colin and I didn't discuss."

In another message, La Canfora said, "Colin would have to address any future demonstrations. I didn't ask him if he would sit or stand. Our chat primarily about his will to play."

"I know @Kaepernick7 is fully committed to playing football and helping those in need. What he would do during the Anthem I do not know," he wrote.

The reporter added that Kaepernick has been living in New York and working out privately in New Jersey with the hope of signing with a team this season.

"After sitting down with Colin Kaepernick for several hours, @JasonLaCanfora says the QB is still actively trying to play in the NFL," NFLonCBS tweeted Sunday, including a video.

"He's not planning on kneeling, he's going to donate all his jersey sales, and he's planning on standing for the anthem, if given the opportunity," La Canfora initially said in the video segment.

"The reports that Colin will stand for the anthem are completely false! He has never discussed this with anyone," she posted.