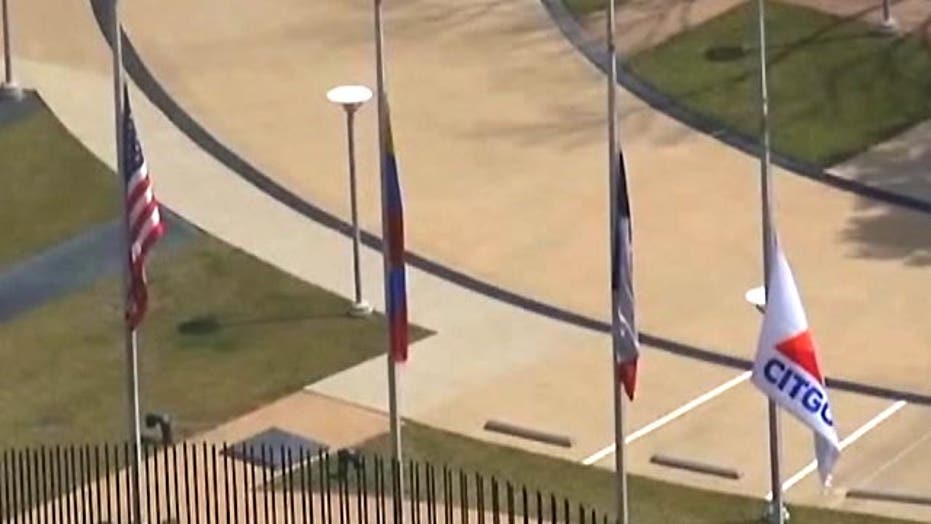 Out of respect for President Hugo Chavez, Venezuelan-owned oil refinery Citgo flew its flags at half staff outside its Houston and Lake Charles, La., offices Wednesday, sparking outcry from drivers passing by.

In Houston, the flags at the refinery were lowered to half staff as late as this afternoon, and caused a number of people to look twice as they drove by. James Post, an assistant project manager at an engineering and construction firm in Harris County, told FoxNews.com the sight was "jarring" and "deeply disappointing."

U.S. protocol allows for flags to be lowered for foreign dignitaries and Post recognized Citgo's right to do so as a private company. However, he said upon seeing the American or Texas flag at half staff, he questioned the person being honored; and said his mind "immediately jumped to the last time we did this in the Houston-area and it was for Neil Armstrong, so, you wonder."

Meanwhile, Terry Backhaus, a financial adviser in Louisiana, told FoxNews.com the flags at the Citgo refinery in Lake Charles had apparently been raised back by noon. "I think I used a profanity when I saw it this morning, I was disgusted," Bakhaus said. "I didn't believe it to be right, not for somebody who wasn't a true American ally."

Citgo told KHOU 11 News earlier Wednesday that it would lower its flags, including the American flag, for Chavez. The company said it would release a statement later in the day, but a request for comment by FoxNews.com was not immediately returned.

The late Venezuelan president died Tuesday afternoon at the age of 58 after a two-year battle with cancer. Chavez's funeral will be held Friday in Caracas. The ceremony is expected to draw leaders from all over the world including Argentina, Uruguay and Bolivia.

Thousands of Chavez's supporters filled Caracas' streets Wednesday to remember the man who dominated their country for 14 years.

But even amid the mass outpouring of grief, questions about the country's future could not be put off for long, with worries amplified by the government's lack of regard for the letter of the constitution, and the military's eagerness to choose political sides.

Others who bitterly opposed Chavez's take-no-prisoners brand of socialism said they were sorry about his death, but hopeful it would usher in a less confrontational, more business-friendly era in this major oil-producing country. Under his leadership, the state expropriated key industries, raised taxes on the rich and forced many opponents into exile.

Venezuela and the United States have a complicated relationship -- and animosity between Caracas and Washington was rising even in the final hours before Chavez’s death. Vice President Nicolas Maduro claimed “historical enemies” of Venezuela were behind Chavez’s cancer diagnosis.

U.S. officials quickly cast Chavez's death as an opportunity for America to rebuild a relationship with Venezuela and for the country itself to pursue “meaningful democratic reforms," with President Obama saying it marked a "new chapter" for the Latin American nation.

An election is expected to be held in 30 days.

Fox News' Jana Winter and the Associated Press contributed to this report.